I love a good cable - and something like this Crown Joule is pretty awesome.

For just $15USD it's a cable, which is usually a good price for a durable looking braided cable - but this has the added advantage of it acting like the hydra (have I been playing too many Greek myth games?) by having an adapter at one end that lets you plug it in to 3 different types of connectors:  USB-A on one end, microUSB on the other with adapters for USB-C and Lightning. 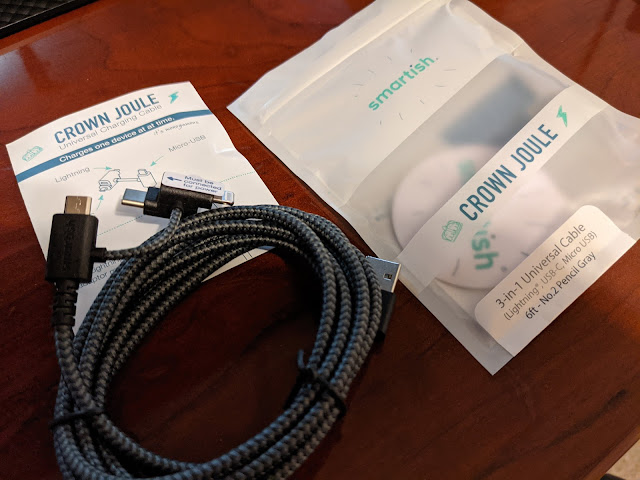 It's very reminiscent of the Nomad Universal, but like half the price (it probably isn't as super strong like the kevlar that Nomad uses... but ... half the price).

Not much else to say about it - the 6' length is nice to be able to not worry where you place it as it should be able to reach and give you room while charging.

It's interesting that it chose to use the microUSB as the other end.  USB-A on the one end is understandable - that's nearly universal as the main connector still - but the microUSB connection means that the adapter has to be aligned properly to sit to change.  Had it been the USB-C then you wouldn't have to worry about which side was which (soon, microUSB will be a thing of the past... at least I hope), but even with the Nomad one mentioned earlier it was USB-C... whereas others that leave out the Lightning connector option they can have the USB-C as the one end.

Must be something with microUSB to Lightning... 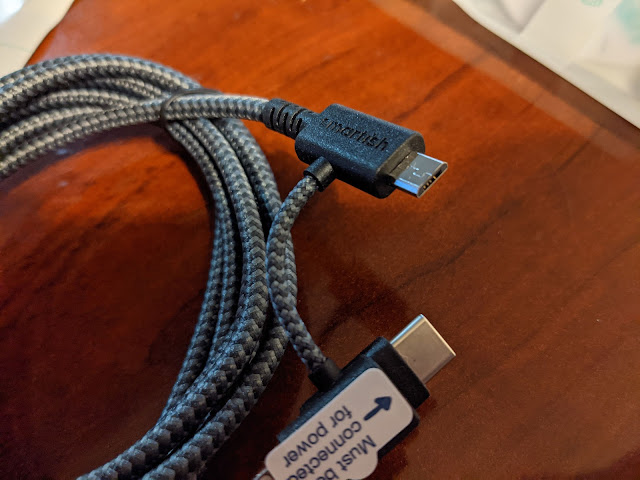 Definitely makes it feel like it's attached solidly, and not on a ring that slides around like the the Nomad one.

Anyhow, it's handy to have something to charge my USB-C phones (or earbuds) as well as my iPhone and the occasional time I need to charge something that still uses microUSB (saving from me to have to go search for a cable.

If you've got a devices that use different charging ports, you'll want to have this.  Makes a great addition to a travel kit.