Music, we all love it and we all want to be able to appreciate quality.  Who doesn't?  But, if you're like me - we're all crammed together stuck with no place to go, so we can't just listen to all the music we want as loud as we want... we have other people to consider.

Same goes for gaming.  My kid wants to play Switch and I'll want to play Stadia meanwhilewife'll want to watch some Netflix.  That's a lot of sounds in a household - we'll want good headphones to help keep them all isolated from each other.

With an opportunity for a wireless gaming earbuds, my son was super excited, especially as I'm looking at the EPOS GTW 270 Hybrids, they explicitly mention compatibility with the Switch - we're sold. 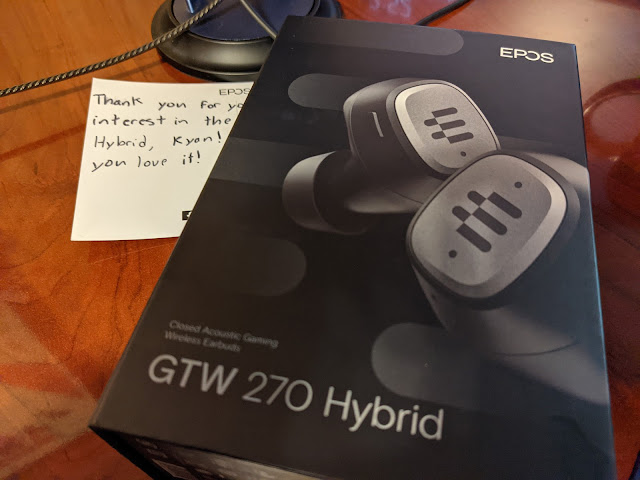 These GTW 270 Hybrid are a great set of quality earbuds, but the 'hybrid' in the name comes from the fact that these come with a special dongle doohickey where it allows it to connect to more than just Bluetooth.  But we'll get to that.

First up, the case that the buds come in are a nice  brushed aluminum and it feel super solid 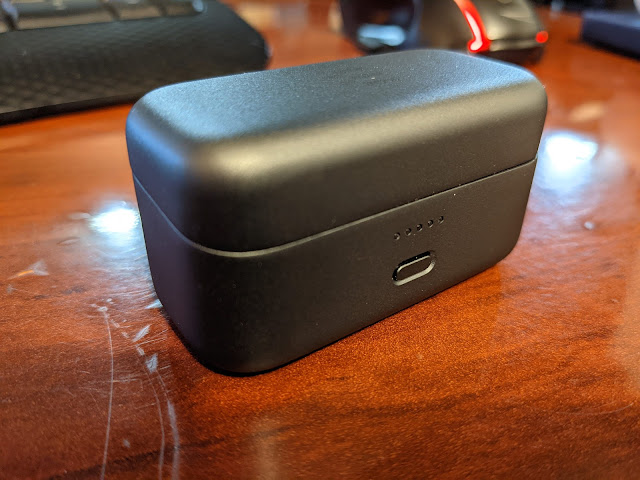 Definitely adds to the feeling of quality.

What's noticeably nice about it is the battery indicator on the front is 5 LEDs ... 5.  I'm tired of seeing a single LED with different colours that you have to guess if it's yellow or orange or... and if it's orange is it 56% or 31%...

With 5 LEDs you get to know with some greater accuracy.

On the back it's got the USB-C port to charge. 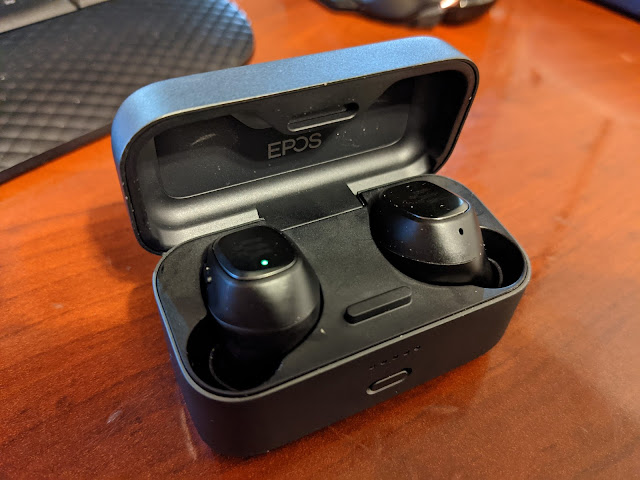 Open it up you'll see the ear buds.  They are snugly in place and it's a little bit of an awkward tug to get them out.

Interestingly enough when you look at the holder, look at all those pins. 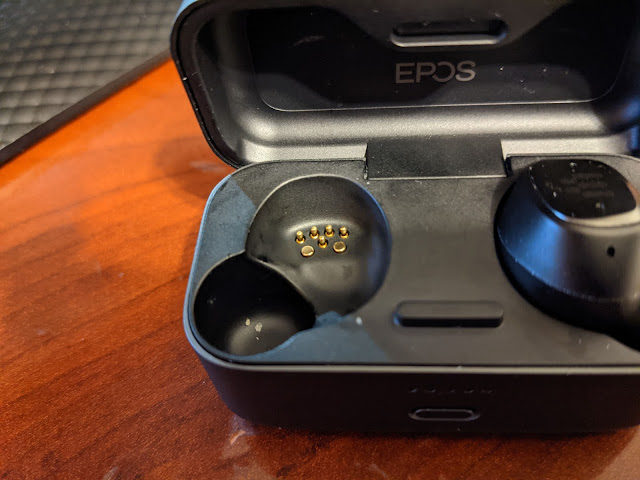 HOLEEE.  What are all them connections for (there is a software for the PC so you can download firmware updates for it, maybe it's because of that)?

But holding the little earbud you can feel how it's bigger than others out there. 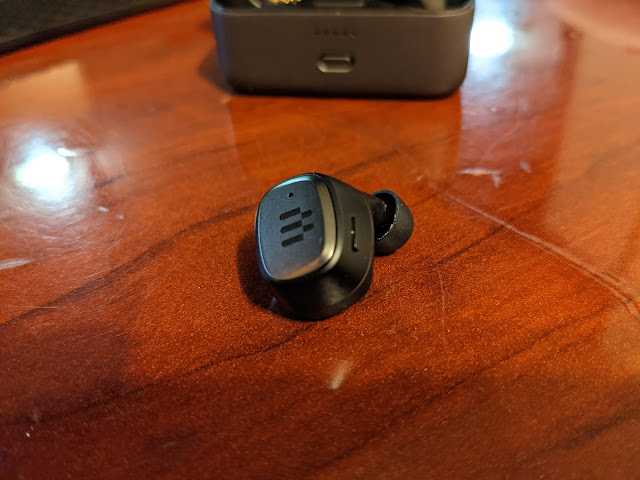 It may be wider and thicker than other earbuds - but, it really ensures that it fits in that upper ear part. 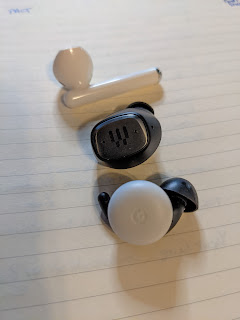 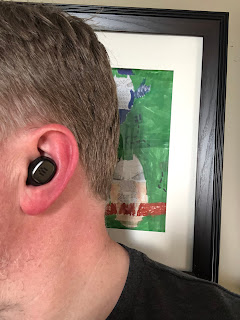 (hard to tell from that photo, but it is thicker and wider)
It really fits comfortably - tho' you do notice and feel that it's bigger in your ears.

Good, EPOS comes from the Sennheiser brand, so it's got some quality pedigree - and it delivers.

It's not a huge THUMPER of sound but it's quality.  I can discern multiple instruments, it's clean and crisp, just not POUNDING bassand screaming highs.  But they're earbuds, what do you really expect.

They're loud enough to enjoy your music.

Now, the earbuds will last about 5 hours ... I never really used it for that long, and my kid never played any of his games that long either.

Charging them up in the case will get you another 3-4 full charges.  It didn't take too long charge back up either.

Setting them up with your Bluetooth device is super simple.  You just long-press the button on the front to put it in pairing mode and then pair it with your device.  Simple enough.

The semi-awkward thing is that if you start pairing it to a couple devices it'll just connect to whatever device is closest; or just finding which it connected to and making it disconnect ... gah, sometimes multiple devices and Bluetooth can just be a pain.  Keep it to one and it's simpler!

Speaking of simple, it has only really one button.  Open the box and it automatically pairs .. so there's no turning it on (or off).  The one button is just a little button on the left hand side.

It's a little hard to exactly find right away.  The control is meant for just play/pause (single tap), next (double tap), previous (triple tap).  That's straightforward enough.  But there's no volume control.  Hrmm...

Now, what's make it fun is this little dongle it comes with and it's where it's pretty cool. 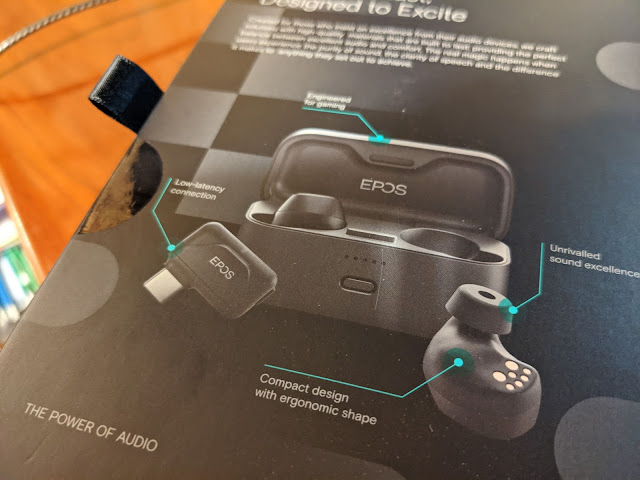 Plunk it into the port on my phone or on my Pixelbook and it powers up and then open the case and suddenly they're connected. 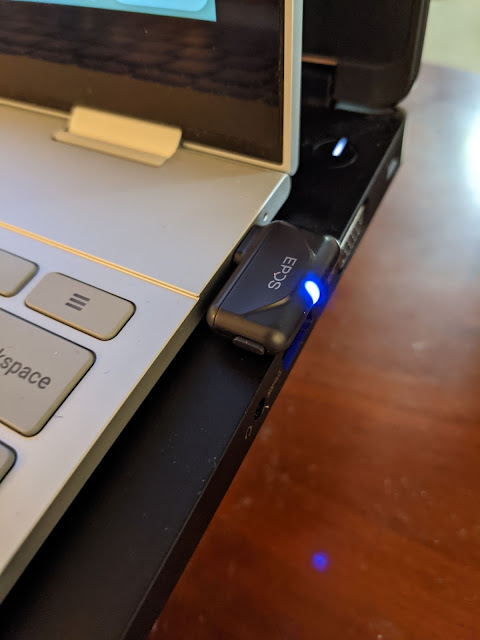 But here's the downside - whereas when you have a Bluetooth connection you can have sound and it'll use the microphone.  But, use the dongle and because it's trying to be as low latency as possible it only allows you to listen.

Took my kid a bit to figure that out - in a tournament and couldn't chat with the team.  He disconnected from the Switch, connected to his phone and had no problem chatting through Discord.

That's a bit of a kick in the shorts.

Another bit of a let down on this is the fact that there is no wireless earbud app for this.  It's just Bluetooth.  All other wireless earbuds have some app.  I mean, it's not necessary as you have it connected, but just would be easier.  Also, without an app to get updates I have to fire up a piece of software for Windows.

Overall, it's a great set of earbuds.  Compared to ones that are just slightly cheaper, these I find are better sounding plus you have a wider availability on how you can use it.

But it does work for sound out for me to connect with my Pixelbook and not have to connect it with Bluetooth to confuse it with other devices.  Can also take it out from the Pixelbook, use the cable adapter to connect it to my work laptop ... easy peasy.