I love my music.  I love listening to it and having a variety of ways to do so.

My son loves his gaming and loves being on Discord with his buddies while they play.

These 2 things often interact in our household and for years I've been telling him to 'put on some headphones' so we don't have to hear them screaming at each other abou tsome pigman or moonlord etc... Kids... so noisy.

He's never liked any of the headsets I'd shown him over the years - until I had these show up at the door. 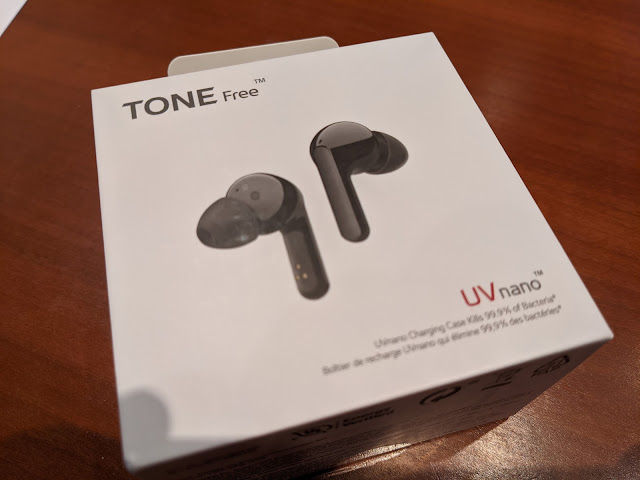 The LG TONE Free (these are the HBS-FN6 model).  The fact that they were black were what attracted him first (he likes to live that 'dark theme life' he tells me) and then when I mentioned how they use UV light to disinfect the buds while in the case he was really interested.

At only $200CDN (cheaper than some other options out there, in some cases, MUCH cheaper) also intrigued me for that UV feature.

Before he ran off with them to be used while he survives the chaotic loud noises of his bus ride to school, and to quiet his friends from screaming (at least that I had to hear) I did get a chance to try them out and give you my few thoughts before I share with you his thoughts.

So, it's a neat little containter that holds the earbuds, and taking them out was fairly easy - putting in wasn't as neat, doesn't feel like they just rest properly, yet, when you close the lid it'll line it up properly. 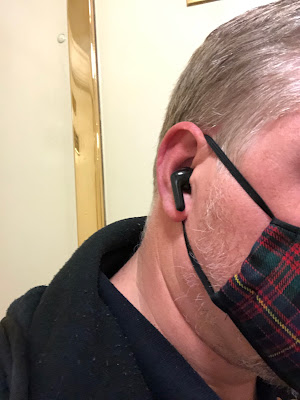 Putting the buds in your ear felt secure because of the cups.  It felt like it was protruding a little bit too far out, but didn't feel like it was going to fall out.

Setting them upon your phone is super easy, in fact I had a notification asking to pair them up before going into Bluetooth or even downloading the special app from LG.

Once set up on Bluetooth the system prompted there was an LG app.  When I tried doing this on my son's phone, there was no option to download the LG app, so we had to do that manually.

It was super easy regardless.

Once in the app you get the settings to modify the interaction with the earbuds.

You can play around with the EQ settings, the controls, the 'ambient sound' option (their version of noise cancellation from Meridian).

The first thing I want to mention is the control and interaction.  This is a headache...

Okay, no, first let's go back to the case.  Unfortunately, you never see what the case battery is, except for the tiny LED that is supposed to be colour coded to a %... but I can never tell with those things. 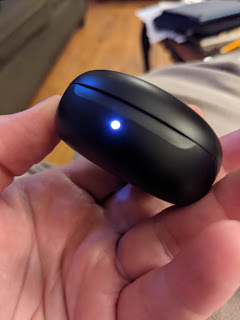 It would be nice to see in the app.

While on the case, the neat catch on this model is that when you put your earbuds in, then close it it'll fire up some UV lights to disinfect. 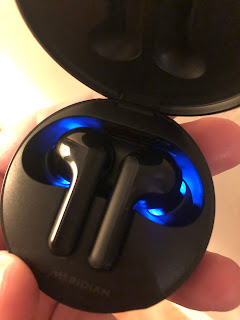 Also, the super easy option of being able to charge the case on Qi is just... icing on the cake. 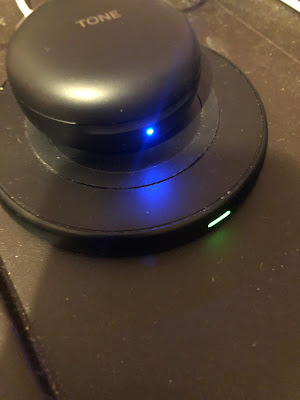 Actually plugging anything in these days feels archaic.

Okay, let's get into how it works.

First up is the sound.  It's definitely not as loud as others and the quality is medium at best.  I guess I've just been spoiled by the Pixel Buds who do bass quite well.

What it does well is the Ambient Sound - that actually was pretty impressive.  I would turn it on and without even any music playing you could hear it doing some work to make the outside sounds quieter.

That was actually cool, better than I'd heard any of the other types of buds out there.

Where the device REALLY falls flat for me is how you interact with it.  Typically with earbuds it is through a series of taps presses on the buds.

They do kick it up a notch by allowing you to customize those taps on either ear, similar to the Huawei models, so that was nice, but they introduce the triple tap, which I found nearly impossible to pull off.

I could tap to play, or double tap (sometimes), but nearly NEVER got the triple tap to work.  Whether I wasn't hitting in the right spot, or I was not doing it fast enough, or too fast... never could figure out.

That was the real pain in the a... part of this.I hope a future update would fix it (there as a firmware update right away) ... but it was nearly unusable unless I was going to control playback with my phone, but then what would be the point of the earbuds if I have to keep using my phone.  When I'm running, or cycling, I don't want to pull out my phone to change the song (especially with that terrible music service of YouTube Music).

My son loves it tho'.  He turns it on and mostly just plays video games or chats with his friend on Discord, so he's not controlling the playback.  So makes sense.

He did say that he would have issues sometimes with his toque and it registering touches.

So, is it for you?  Maybe, in this COVID era something that includes disinfecting would be well looked on.  I would think that more so I want it to clean than disinfect (kinda gross to always find out how much ear wax you actually have... eww).

Having something that's stylish as well as convenient is always welcome.