I don't know about where you are, but up in the Great White North, it's getting chillier.  I've given up the idea of biking into the office anymore.  Some are even talking about turning on their furnace.  Not quite yet there, but getting close.

Turning on the furnace means I'll have to start looking at my Nest Thermostat E again, as I've all but ignored it since I turned it off (we don't have an A/C connected).  I love the Nest smart leaf system where I tell it to just be energy wise and it'll adapt as needed.

Google has released the latest Nest Thermostat, the 'new' Nest Thermostat, for just $180 and it looks pretty sleek.  Now, there are those that are like "heck, I can buy a 'smart thermost' for just $35 - but I think they're missing the full picture.

Being able to access their heating via an app, not having to go and figure out a schedule of heating one LCD line at a time... anywho. 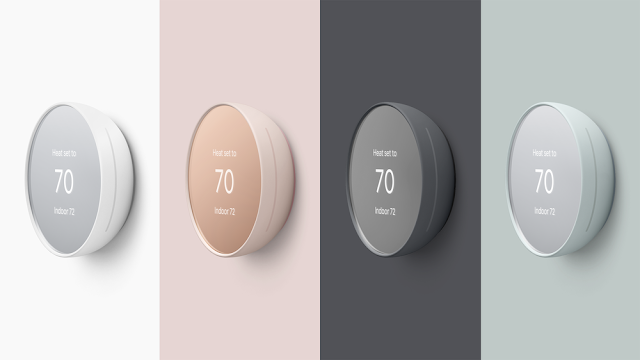 The new model incorporated their Soli tech they had in the Pixel 4 (pfft) and put it in here.  Instead of a true 'dial' that you rotate, you can now just slide your fingers over the sides to cycle through - and still have the touch display.  Soli will help it to recognize when people are home or away (in addition to your phone's geofencing).

On the briefing call we had with the team they mentioned, but didn't make too big a deal of it, that this was the first born in and launched Google / Nest item and as such it's set up would be through the Google Home app and not the older, archaic, clunky looking Nest app (please let that die... c'mon, the only way to set up a timing was via a fixed landscape UI... ugh).

Another neat option was that you could start to store your installer's info on the app for it (i.e. who do you call when something happens, the info is readily at hand) and then set up for those spring reminding and HVAC monitoring.

It even can monitor those upticks or drags on the system (i.e. that you set it to heat by 3°C but it went up by 1, down 2, up by 3, down 1) and see the performance of the system.

My favourite 'feature' tho' has to be the fact there is now a bit of a 'saucer plate' for you to install behind it. 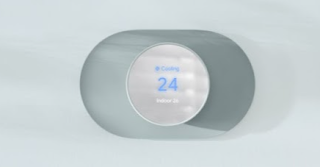 When we installed our previous one there were some mounting holes from the older clunkier one that weren't quite concealed by the new one and well... we're just too lazy to poly-fil in the holes, and paint over - because then we'd have to paint the whole wall, yadda yadda.  This just makes it look natural.

So, $180CAD and is pre-orderable now, just in time for when the snow starts to fly!