Minecraft for Education - now on Chromebooks

Over the pandemic with the learning from home, my son's school announced one of the initiatives was to include some Minecraft for Education work.

But... we use Chromebooks.  And MCE wasn't available.  Only on Xbox, or PC (and I think PS).  Stuff we didn't have.  So he never got to join in on some of the stuff his friends were doing and he HEAVILY begged me to buy him a 'regular laptop'.

With the new school year looming, and his new school being deemed a "Microsoft Flagship" school, it was sure to be including more of Minecraft and heavily Windows environment... until I came home one day and said "hey, guess what you can get on your laptop now?"  When I said MCE ... I didn't even have to say the words, he got super excited and ran around to find his typically pushed aside laptop.

So, I had him show me how simple it was to set up on my Pixelbook (not that I wanted to)

The idea is that essentially, because Chromebooks can run Android, its download link just brings you straight to a Play Store app listing that's only shows compatibility with Chromebooks. 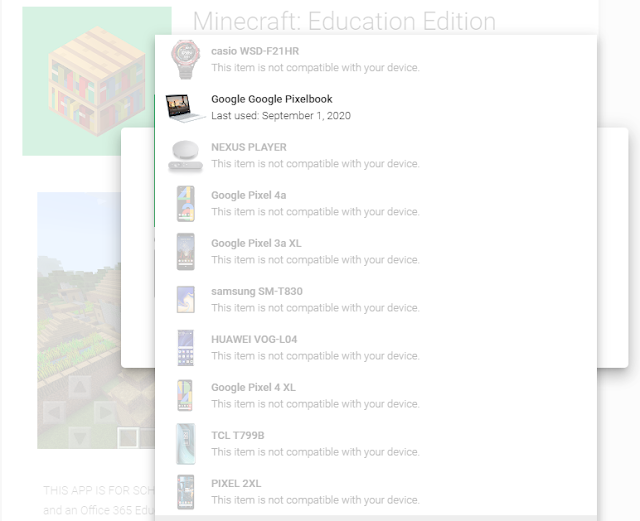 Install and run, and then you just log in with your Education account (his school sets them up with it) and you're off to the races.

Now, he did have some issues you can see with the Kone mouse not letting him use RClick as the place (even tho' the RClick was working), but he's happy as can be with his Acer and his mouse now catching up with what worlds his friends created over the summer.