Crave is now on Roku

Had your fill of streaming yet?  In my mind, streaming is easiest on a Roku.  So easy.

And they've just added a new channel, Crave.  So if you subscribe to that (and I think there's a 30 day free trial at the moment) you can get your Letterkenny fix on.  Dang, I loves that show. 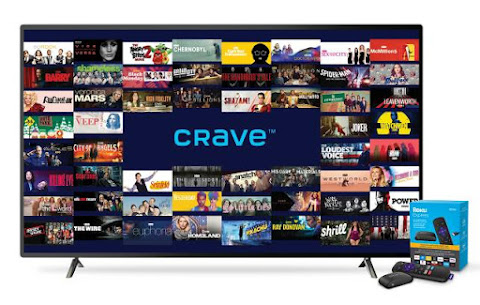 – Consumers with a Roku player or Roku TV now have access to all Crave content and packages, including Movies + HBO, STARZ, and SUPER ÉCRAN –

TORONTO (April 8, 2020) – Bell Media announced today that Crave is now available on all Roku® streaming devices in Canada. On the heels of Crave announcing 30 days free for new direct-to-consumer subscribers, it’s expanding the reach of its prestige entertainment offering to consumers with a Roku® streaming device. Roku users now have access to programming from HBO, SHOWTIME, STARZ, Hollywood-hit movies, as well as French-language TV and films from SUPER ÉCRAN, directly from their Roku streaming player or Roku TV™.

Launching on the Roku streaming platform creates additional reach for Crave, which is also available to Canadians with access to the Internet at Crave.ca, via iOS and Android, and through platforms like Apple TV, Chromecast, Xbox One, Amazon Fire TV, Android TV, and select Samsung Smart TVs.

“Our team has been working diligently with Roku to deliver Crave to Roku users, and we’re absolutely thrilled to share this news with Canadians today,” said Tracey Pearce, President, Distribution and Pay, Bell Media. “Roku streaming players and Roku TV models deliver a premium user experience that is simple to use, and truly elevates the Crave experience for subscribers.”

”Welcoming Crave to the Roku platform is fantastic news for our Canadian customers,” said Arthur van Rest, Vice President of International at Roku. “Crave helps us increase the volume of Canadian programming on our platform in both English and French, and provides our customers with access to popular services like HBO, Showtime and Starz.”

Delivering more Oscar®-nominated and Emmy® Award-winning programming than any other service, Crave is Canada’s prestige entertainment offering, with HBO, SHOWTIME®, Starz, Hollywood-hit movies, a superior collection of kid’s movies and programs, and thousands of hours of acclaimed television series, specials, factual programming, and originals that can’t be found anywhere else.

Crave is the exclusive home of HBO in Canada, delivering HBO’s current slate of signature dramatic and comedic programs, documentaries, films, and live specials, as well as titles from HBO’s extensive off-air library. Crave is also home to current SHOWTIME series and specials, and past SHOWTIME hits. Crave Original hit series include comedies LETTERKENNY and NEW EDEN; CRAVINGS: THE AFTERSHOW with Lainey Lui; HEALTHY IS HOT with Chloe Wilde; candid interview series MUCH STUDIOS PRESENTS: MIKE ON MUCH IN CONVERSATION WITH…; a series of original stand-up specials; the upcoming competition series CANADA’S DRAG RACE; and the upcoming apocalyptic original comedic documentary series WE’RE ALL GONNA DIE.

Crave is a major supporter of Canada’s production industry, helping to fund and develop numerous film and documentary projects including feature films THE SONG OF NAMES, WHITE LIE, and THE GRIZZLIES among others, as well as Crave Original Documentaries ONCE WERE BROTHERS: ROBBIE ROBERTSON AND THE BAND, SHARKWATER: EXTINCTION, YOU ARE HERE: A COME FROM AWAY STORY, and ANTHROPOCENE: THE HUMAN EPOCH. Crave also includes acclaimed selections from the Toronto International Film Festival which are featured in two exclusive collections: Best of TIFF and TIFF Selects.

Crave is a bilingual TV and streaming service with more than 6,000 hours of exclusive French-language content included with the Super Écran add-on. Crave is available directly to all Canadians with access to the Internet at Crave.ca, via iOS and Android, and other platforms. It’s also available in English through participating television providers across six 24-hour High Definition linear and on demand channels. Crave is from Bell Media, Canada’s leading content company, providing Canada’s most-watched and most-acclaimed television programming on network, specialty, pay and digital platforms. Visit our website at Crave.ca.