Posted by Ryan Moore on March 22, 2020
Well, folks, this is a review during a bit of an awkward time. and well with all this social distancing you'll be at home more than you're probably used to and you'll want some good device to help you through it.

This is a great option for that... it's not a tiny laptop that's easily moved around with you, rather it's a larger laptop really meant for you to plop down with it and immerse yourself in whatever...

This is the 17" LG gram, and trying to find the real price is a bit hard but should run you about $2200CDN.

Let's have a look at it:


First off, let's look at the specs: 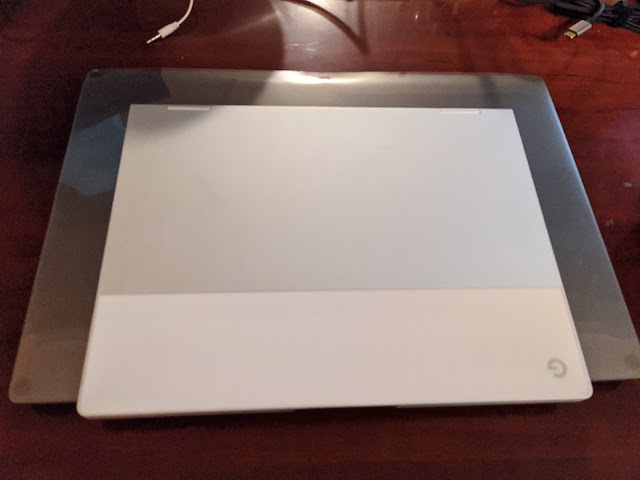 Yeah, so first off that's a big box... huge box.  And under the box is a still large device.  This is that in-between laptop and a desktop.  It's almost too big to want to cart around.  The book bag I have is just large enough to fit it in.  If you have a backpack it should be fine to put it in lengthwise, but this would be a deal-breaker for me, having to get a new carrying bag for it.  Even my corporate issued laptop carrier which is big would be slightly just the right size.

But, then you open up the laptop and you're just smacked in the face by the size of the screen and how good it looks.

That's a lot of screen!  The minimal bezel helps really with that impact.

I keep trying to touch it tho'... woops.

Before I get to the rest of the device, I should go around the outside of it to show you what you get.

On the left side is the proprietary power plug... booo ... however you can use the USB-C port to deliver power if you have something that's PD capable.  Great for me as that's how I do all my charging anyways. 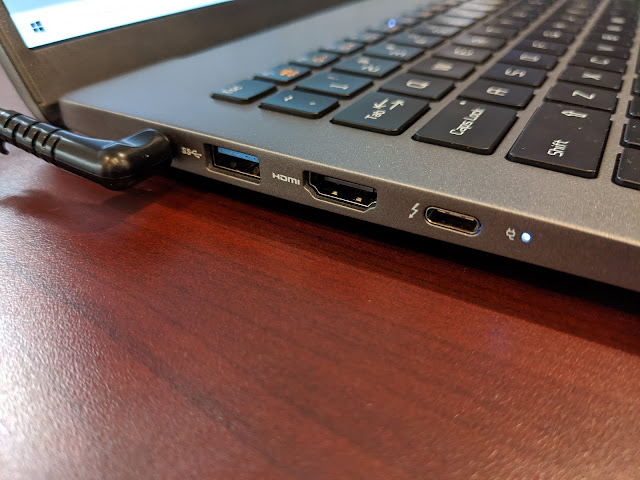 That port can even be used for an Ethernet connection and there's an adapter in the box.

There's also a USB-A and HDMI port on that side too.

The other side has 2 more USB-A ports, the headphone jack and a microSD slot. 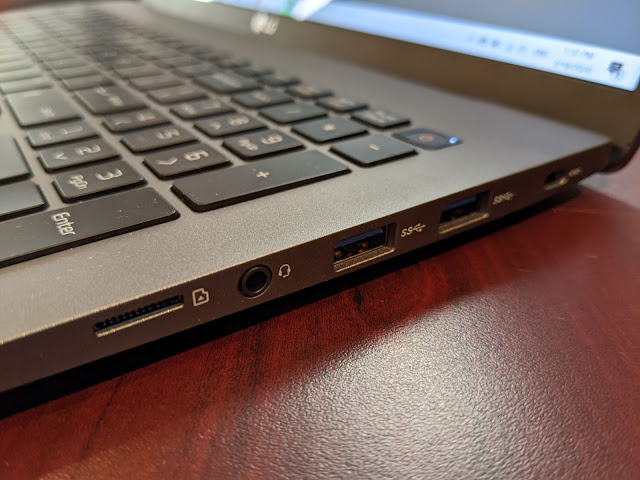 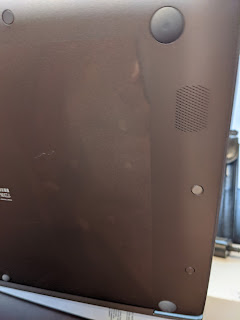 It's surprisingly thin overall given its size.  A bit of a jarring difference, but welcome.  I still can't get over how wide/deep this thing is... but sure is skinny. 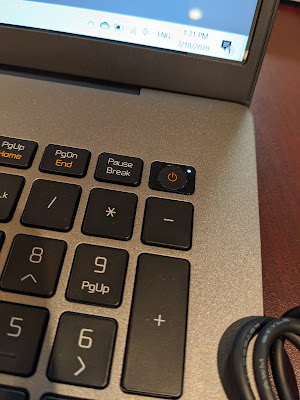 Okay, so let's look at the rest.

With the lid open you see a huge keyboard... well, it's a big display so lots of space on the 'shelf' to put a full keyboard AND a Numpad too.

You'll notice that the power button has a little embedded circle on it.

Well, that's also a fingerprint reader, so you can log in super easily.

The ledge where you put your wrists as you type is not so bad, doesn't feel too plasticky, doesn't feel too metallic ... but I found that after an hour or so of work it did become a little uncomfortable and left an indent, so you may want to look into finding a more ergonomic way to use it.

The keyboard does have a backlight for dark times, which is cool.

The downside of the keyboard is that it really is clickety-clackety noisy.  I wish it was softer, it's not so much that it was uncomfortable, just noisier than I was used to.

Booting up the device, I am so out of touch with Windows that I had run into some issues going through the set up ... I accidentally put in French and tried to go back a step to choose English and ever since I have had errors trying to install some translation things, and updates ... even though I picked English, I guess enough had 'gone through' on the initial set up that often my interface items on setup were in French... it seemed to flip flop. 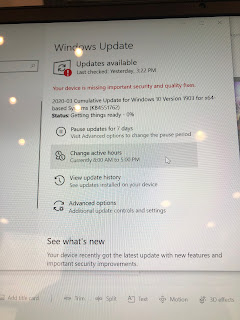 Another odd thing is that I often had issues doing Windows Update ... I don't miss Windows at times.

LG had a couple things that seem to be theirs on this, such as the LG Update panel and there was a "Reader Mode" couldn't find out what it was or how it worked.

But how did this perform.

It's an i7 with a ton of RAM, running the SSD so it was pretty fluid on standard tasks.  It viewed webpages, watched Youtube and Netflix and even some Canva work.

Ramp up the use to a little heavier like some Stadia games or Fortnite and I noticed it would slow down noticeably.

Not terribly, but noticeably.

In the video I  showed playing a simpler Stadia game, but try like Metro or Tomb Raider and it wasn't as smooth as say Steam World Dig 2.

Sound was decent enough, I'm not used to that positioning so it was ... different.  It was a little bassier than I would have liked, but happy it wasn't a tinny sound.  Most often I would listen with headphones on anyways.

Battery, now that was an interesting take.  It claimed it would last 19.5 hours ... I knew that was going to be a stretched truth, like only if it had no wifi and did simpler tasks.

I did some 'metering' and found that ... well I forget if it was like 4 hours of simple web work or so it said it had 70% remaining ... but then said that would last another 4.5 hours.

2 hours later more Netflix and web stuff it had 54%, with the battery estimating 4 hours remaining.

True, I had only really been using it about a week, so not enough time to really 'calibrate', but my estimates were saying that it should last you a decent 8-10 hour day, depending on what you do, obviously.  It's not 19.5 hours, but a realistic number and I'm not disappointed.

That big big monitor must suck up some juice.

Overall, I was happy with the performance... it would be great, but ... damn that's a big thing.  I personally wouldn't want to be lugging that around.  Great for just at home, but it's hardly the lap device I would want.

However, in this time of Corona virus pandemic, staying home is the ideal thing and having something this large, this quality good screen ... can be a comforting thing.

Also... man, I do not miss Windows at all.  Good thing for me I live like nearly all the time in Chrome.
gram laptop LG Review video Windows