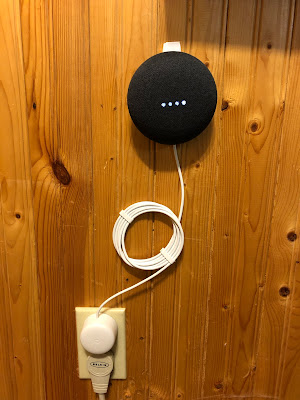 It's been a #MadeByGoogle month, and testing out all the new lines.

I put up the big Nest Hub Max last night and got it all set up, but almost forgot entirely about the Nest Mini that I added to my workspace.

Running at $69 (which is less than what the Home Mini launched at) it's bit of a tick up from the first version.

The big difference from the older model (which you can find on sale usually around the $35 mark) is 2-fold.


1. It has a hanging 'hole' on the back so you can mount it just about anywhere.

Oh, the fabric has now been made fully of recycled material, there are LED indicators for the volume up/down side touch sensitive areas.  You can also tap the middle for play/pause (which the Home mini used to have, then was disabled, but they'd never really brought it back).

I don't know if it's really that much more voice sensitive than the original, all of my old ones seem to work just fine. 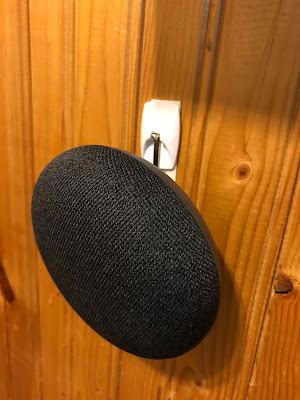 The big feature tho' is the hanging feature.

On the back/base of the speaker there's a little 'screw hook' that it can just rest wherever.

On the old minis I had bought a mounting adapter so that I can plug it in and rest it in something.  Worked okay, but sometimes having it 'mounted' on an outlet near the floor register made it a little hard to pick up my voice.

Now, we can just have a screw in a wall, or as I'm using with mine as it's hidden under a little shelf, a 3m wall hook that it hangs on.  Sure it doesn't look super 'professional' as it's not flush, but who cares, no one is seeing it.

Plus, the nice sound it makes doesn't matter where I put it.

It really does have a nicer sound than the previous.  Typical Google Assistant answers you may not notice, but listening to music, you can definitely hear the bass being a definitely richer sound.

Setting it up is the same as usual, and love how Pixels just automatically sense something new - didn't have to fire anything up.

The handiest thing I think we have in our house (even more so than me!), and we now have 5 minis, a Nest Hub and now a Nest Hub Max.