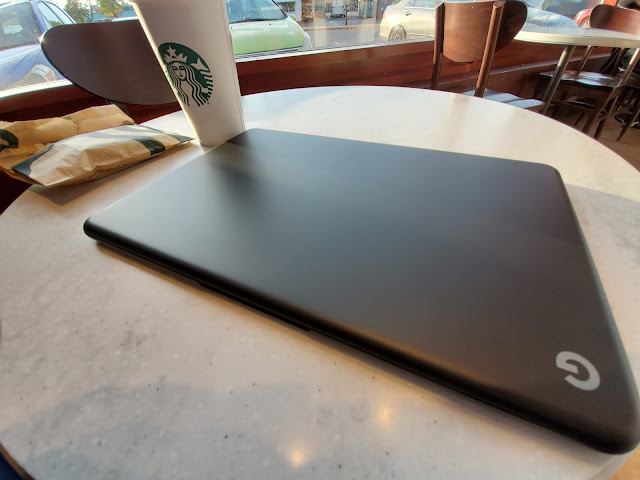 Okay, I'm going to start with saying I love my Pixelbook, the original.  It's an amazing laptop, but it's had the ability to be also a tablet as well with the 360° hinge.  But I have to admit, I've never used it as such, ... BUT, there was the ability.  The Pixelbook Go, is taking that away - but leaving the best of the Chromebook performance.  It's still pretty pricy as a Chromebook, but it's an amazing performer for that price.

So, you get 1" more of screen display, with very minimally more size.  It's only slightly thicker, slightly wider.  Barely noticeable. 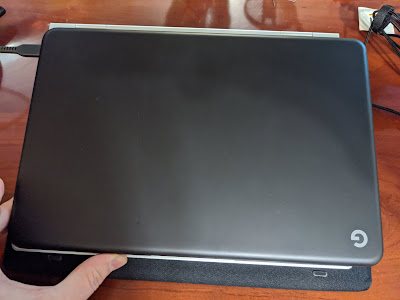 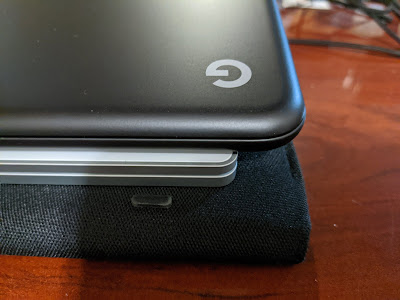 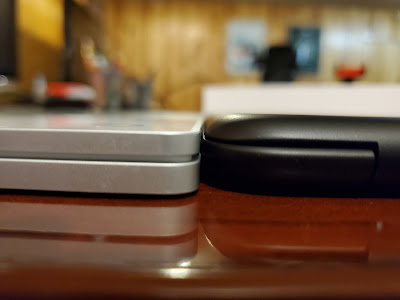 Most noticeable is the base of it.  The ridges give you a clear indication that this is the bottom and depending on what you put it on, crumbs and liquid won't be 'stuck' to the bottom. 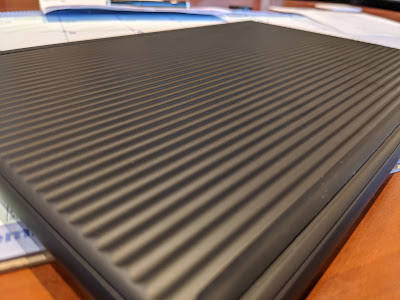 Going around the device we see that it's kept the USB-C ports on both sides, both being able to be used for charging. 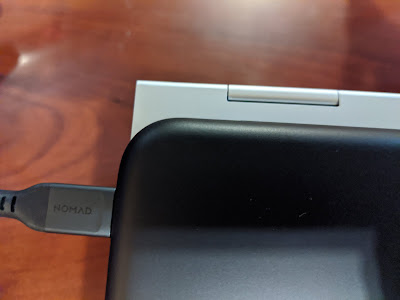 Which is great.  I just re-did my desk in the basement and I don't have to worry about where the power cable reaches.

It still NEEDS that 45W charger.  Anything less and you'll get that persistent warning that a low power charger may not charge with the display on.  Another replacement charger is going to be $75CDN if you wanted to leave one at home and not have to worry about unplugging and taking it with you every time you go out.  Kind of a pain.

Opening it up isn't too bad, there's a little lip, but with the new hinge, I still need to use 2 hands to pry it open. 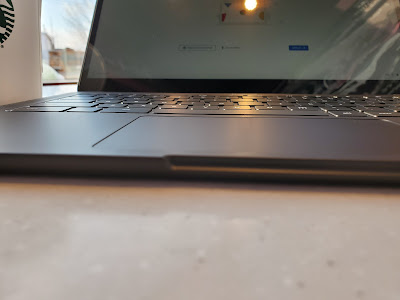 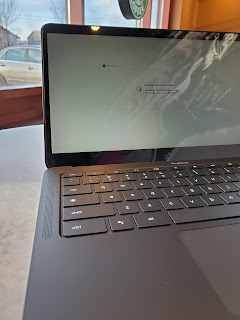 Booting up Chrome is so fast, you don't really get much time to take in what the keyboard looks like

It's a nice keyboard, looks about the same (some new layouts of the buttons ... notice the power button in the corner... no more power/volume rockers on the edge of the device).

Although, it's not a light up keyboard like the original, it's not missed.

The buttons are nice mix between a strong clackety clack and a soft gel feel.  It's comfy.

The mouse pad also feels the right amount of 'smush' needed to press it if you wanted to press vs. just tapping.

Around the keyboard we have the newly placed speakers.

No more facing downward, these not only have a little more 'oomph' than the originals (nicer bass), but they can now punch you in the face with sound. 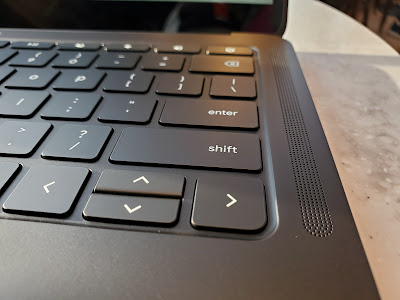 At the higher volumes, it's more than I would want to have and be right there using, so it's great.

In terms of performance, this little box chunks away at just about everything I throw at it and has no issue playing along nicely.  Now, I wasn't loading up PUBG or Fortnite on it (they wouldn't be compatible as far as I know), and I'm just using it for mostly my day to day computer operations (social media, email, youtube, etc...).  The i5 with 8GB of RAM is more than enough.  Would going down to the m3 be just as good?  Probably.  It'll save you almost $300, but halving your storage isn't recommended (not that I actually save much on the drive, I mostly use Google One Drive and a 2TB storage for everything).

In other terms of performance is the battery.  It's a slightly larger battery than the original.  My testing has shown it should be lasting just over 8 hours of use.  So if you're going to go about using for your daily usage, you should get a workday in and only start to worry if it'll last.

My typical usage was some emails and social media, listening to music in the background tabs, and a few app updates here and there.  Most 'heavy lifting' of anything I'm doing is usually done via whatever webservice is out there (pixlr, youtube...) so nothing of major computing power needed on my end.

This is a great, albeit an expensive, option for a great Chromebook.  There are cheaper options out there, for sure, but this has a fluid screen display, still touchscreen, great battery and excellent sound.

I'm glad that ChromeOS gives us the option to set where the sound goes to.  When I plug in my USB-C/HDMI adapter, the sound goes automatically via that connection - but my monitor doesn't have speakers, so I can go into a quick setting in the panel to say keep sound on the internal speakers and not go to the monitor.  Sweet.

Overall, I can't recommend this enough... if you've not delved into having a Chromebook you truly are missing out on a great mobile device.

The only thing I can complain about (aside from the slightly higher than average price for near similar models) would be the weird thing that Chrome has done with G Suite accounts.  Apparently you manage Chrome devices now separately from movile devices in our control panel and there's a cost to do so, so on Chrome devices they're blocked from accessing Play Services; which is fine to me, I just want to be able to access Gmail from the web, not an app; which still works, but we get a constant notification of the blocked access.  Highly annoying!
laptop Pixelbook Pixelbook Go Review video