Posted by Ryan Moore on October 16, 2019
So, as much as I love my Nexus Player and Chromecast, there's something still about the simplicity of Roku that makes it my streamer of choice.

Roku has been crushing it lately with updates and choices, and today (well yesterday, ... but yesterday was a pretty heavy Google day) they upped the game even more by having the Apple TV 'app' now available on the platform. 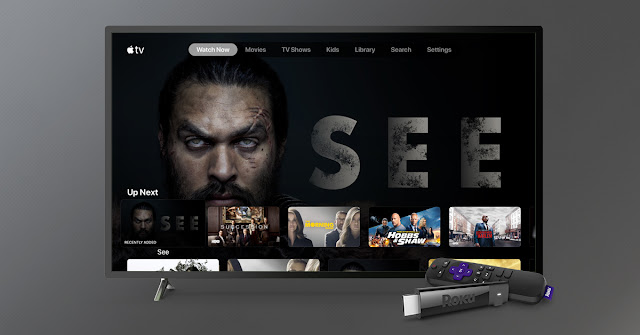 So those Apple TV users now can just add the 'source' to the Roku screen and get access to their Apple library without having to buy Apple hardware!

LOS GATOS, Calif.—October 15, 2019-Roku, Inc. (NASDAQ: ROKU) announced the Apple TV app is available on the Roku® platform starting today. For the first time ever, Roku users can add the Apple TV app via the Roku Channel Store to discover and watch movies, TV shows and more, including accessing their iTunes video library and subscribing to Apple TV channels directly on Roku devices. Starting November 1, Apple TV+, Apple’s home for all-original shows and movies from the world’s greatest storytellers, will be available on the Apple TV app on the Roku platform.

“With the Apple TV app coming to Roku, our customers will enjoy an even broader range of exciting entertainment, including the highly anticipated Apple TV+ service,” said Scott Rosenberg, Senior Vice President and General Manager of Platform Business, Roku. “Roku is a valuable partner for content providers looking to reach a large and engaged audience, and we’re looking forward to bringing this new option to Roku users.”
Apple TV App
Through the Apple TV app on their Roku devices, customers can enjoy personalized recommendations of shows and movies; subscribe directly to Apple TV channels and more using their Apple ID and password; browse, buy or rent more than 100,000 movies and TV shows; and watch all the shows and movies they have previously purchased from iTunes.
Apple TV+
Beginning November 1, Apple TV+ will be available in the Apple TV app on Roku, giving users access to exclusive shows, movies and documentaries from the most celebrated creative artists, including Oprah Winfrey, Steven Spielberg, Jennifer Aniston, Reese Witherspoon, Octavia Spencer, J.J. Abrams, Jason Momoa, M. Night Shyamalan, Jon M. Chu and more. Roku users can subscribe to Apple TV+ right in the Apple TV app on their Roku devices for $4.99 per month with a seven-day free trial. Apple TV+ subscribers can also watch on the Apple TV app on iPhone, iPad, Apple TV, iPod touch, Mac and other platforms, including the web (https://tv.apple.com). For more information about Apple TV+, please visit https://www.apple.com/apple-tv-plus/.