Posted by Ryan Moore on October 16, 2019
Okay, I'm definitely more of a PUBG fan than Fortnite, and the new update makes it even cooler.  A ledge grab is AWESOME!!

Check out the release: 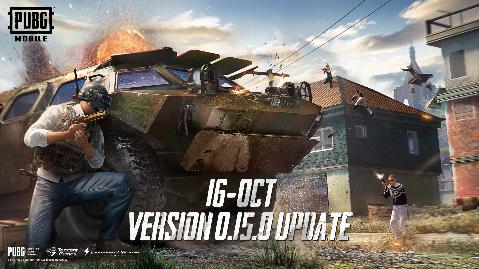 LOS ANGELES – Oct. 16, 2019 – Today, PUBG MOBILE released the full version 0.15.0 content including new firearms and vehicles, new features and the updated Survive Till Dawn – Halloween Mode and more coming. Players can skydive into the latest update for free on the App Store and Google Play.

New features have been added to all PUBG MOBILE maps and game types as part of the 0.15.0 content update, including:
·        BRDM-2 Amphibious Armored Vehicle – Players can travel on both land and sea with this flare gun-exclusive tank, which reduces damage taken
·        Ledge Grab – The highly anticipated ledge grab feature now allows players to climb and clamber buildings to reach previously-inaccessible places for new kinds of combat
·        Desert Eagle – This new weapon with the highest damage and muzzle velocity out of all pistols deals a daunting 62 damage per bullet and is ready for Red Dot, Holo Sight, Laser Sight and magazine attachments
·        Fuel Drums – All vehicle gasoline containers found around the maps can be exploded by shooting several bullets at them
·        Graffiti – Players can make their mark on the battlefield with up to four types of graffiti
·        Firearm Improvements and balances – The M16A4, Vector, UMP45 and MK47 Mutant have all been adjusted with new attachments, ammo types and carrying capacities, along with other performance and graphics fixes.

Earlier this year, PUBG MOBILE teamed up with Resident Evil 2 to give the classic battleground an undead makeover with the introduction of the Survive Till Dawn mode. Beginning today, players can get into the “Halloweeks” spirit with an all new Survive Till Dawn mode boasting modified background objects and “Halloweenized” monsters. There is now a hostile human faction in abandoned factories and strongholds. Players can defeat them to earn better rewards, while killing zombies grants special bio-warfare equipment that is effective against zombies and other players.

Late in this month, PUBG MOBILE fans can enjoy the new gameplay experience with the coming all-new Payload Mode with high-octane features never-before-seen in the classic mobile tactical tournament, including:
·        Helicopters – For the first time ever, players can take to the skies to seek and destroy enemies with the new attack helicopter
·        Super Weapon Crate – Spawns regularly and activates after three minutes. Contains air drop weapons, Lv. 3 armor, Payload Mode weapons and more!
·        Teammate Recall – Fallen teammate identification cards can be collected and taken to the nearest Communication Tower for a quick revive
·        New Payload Weapons – The explosive RPG-7, M3E1-A, M79 Grenade Launcher and M134 minigun are now available
·        Air Strike Beacon – Players can call in air strikes to targeted areas around the map
·        Vehicle Repair Packs – Packs can be unlocked to fixed damaged vehicles and tires.

PUBG MOBILE is available to download for free on the App Store and Google Play.
app update Game Mobile PUBG