MLB 9 Innings 19 game has a new event where you can win swag!

Posted by Ryan Moore on September 06, 2019
Not much of a baseball fan myself, but the MLB 9 Innings 19 game has an in-game event where you can win some signed items from Mike Trout. 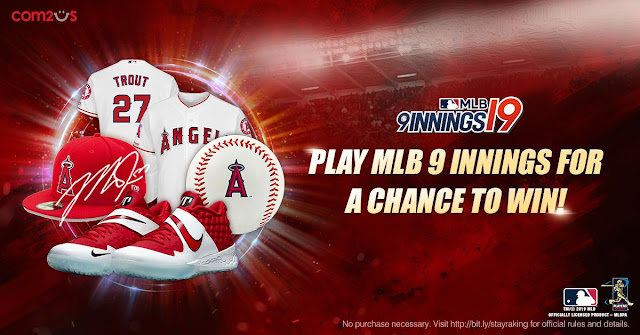 LOS ANGELES (Sept. 3, 2019) - Developer and publisher Com2uS is teaming up with Major League Baseball’s biggest star for a month-long sweepstakes. Throughout September, players can win exclusive autographed memorabilia from Los Angeles Angels center fielder Mike Trout through “Mike Trout’s Stay Raking Sweepstakes Event” in MLB 9 Innings, Com2uS’ wildly popular mobile game.
Trout, an eight-time MLB All-Star, two-time American League MVP, six-time Silver Slugger Award winner and the 2012 AL Rookie of the Year, has been the MLB 9 Innings highlight player for more than three years. In celebration of his achievements, Com2uS is rewarding fans with in-game rewards to go along with the sweepstakes.
To enter, fans must collect points, up to 1,000 a day, by completing various missions in MLB 9 Innings. Two sweepstakes will run concurrently throughout September, the Weekly Sweepstakes and the Grand Sweepstakes. Each Monday, beginning on Sept. 9, five winners will be announced to receive a Mike Trout autographed baseball as a prize for the Weekly Sweepstakes. Prizes for the Grand Sweepstakes include Mike Trout signed caps, shoes and jerseys, in addition to various in-game rewards.
MLB 9 Innings 19 is a mobile game based on Major League Baseball, offering a truly authentic baseball experience, with up-to-date MLB team information. The game is officially licensed by the MLBPA and MLB, and has been gaining popularity in South Korea, the United States, Taiwan and Japan, becoming the most recognizable Major League Baseball game by reaching the top 10 in 78 (Google Play Store) and 46 (Apple App Store) countries.
Stay in the Game with the latest news check out MLB 9 Innings on Facebook and in the Forums.
About Com2uSEstablished in 1998 and headquartered in South Korea, Com2uS operates internationally with offices in the United States, Germany, Japan, Singapore, Taiwan, China, Thailand and Vietnam, and became a subsidiary of GAMEVIL in 2013. The mission is simple. As a leading developer and publisher of mobile games, they thrive on creating games with a level of depth and engagement rarely experienced on mobile platforms. For more information about Com2uS and their portfolio of groundbreaking mobile games, visit: www.com2us.com.
Mike Trout’s Stay Raking Sweepstakes Event:No purchase necessary to enter. Participants must be U.S. residents (including U.S. territories) who are at least 13 years of age (with permission of a parent or guardian) at the time of entry. Enter by playing ‘MLB 9 Innings 19’ mobile game with HIVE ID. Odds of winning depend on the number of eligible entries received as of the applicable drawing date. Entries are valid until September 30, 2019. Void where prohibited. Visit https://event.withhive.com/ci/9innings/pre_trout for official rules and details. Sponsored by Com2uS.
Major League Baseball trademarks and copyrights are used with permission of Major League Baseball. Visit MLB.com. OFFICIALLY LICENSED PRODUCT OF MAJOR LEAGUE BASEBALL PLAYERS ASSOCIATION MLBPA trademarks and copyrighted works, including the MLBPA logo, and other intellectual property rights are owned and/or held by MLBPA and may not be used without MLBPA's written consent.
Game MLB