Terraria gets Mobile update and put on the Switch 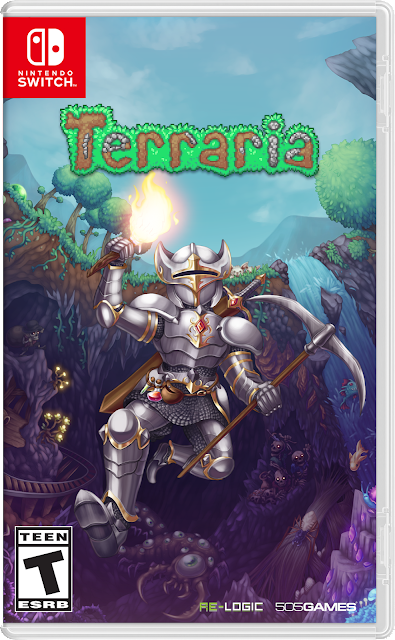 I just had this conversation with my son the other day.  He's spending more time on Minecraft, but I always preferred Terraria to that... and he said "Terraria is dead, dad".  And went on to some diatribe about length of time between updates, mobile etc... (obviously something he heard on some other youtube channel).

And then I get this news yesterday.

Cool.  I liked the app, but it has been a long time since it had any sort of update.  It used to crash like crazy for me, so I stopped playing (let alone the cloud saving never really worked well).

Hopefully this and the Switch variant have some cool improvements and I look forward to playing again (first going into it I don't see anything about my Google Play Games settings or my achievements are gone).


‘TERRARIA’ FOR NINTENDO SWITCH™ SPROUTS ON RETAIL SHELVES BEGINNING TODAY
Anticipated 1.3 Free Update for Terraria on Mobile Treats Players on iOS and Android to A New and Improved Rebuilt Terraria Featuring New Content and Enhanced Multiplayer
CALABASAS, Calif. – Aug. 28, 2019 – 505 Games, in partnership with creators Re-Logic and developer Pipeworks Studio have brought the 2D action-adventure game Terraria to retail shelves across North America and Germany for Nintendo Switch™. Terraria is available for purchase physically from participating retail stores in North America and Germany, priced at €29.99 / $29.99.
Terraria debuts on Nintendo Switch™ today, packed with popular features and content from the previous 1.3 PC/console update and enhanced for Nintendo Switch consoles, including:
·        Touch-screen support to quickly navigate inventory and add more finesse in building, digging and combat (two Joy-Con™ controllers required per player)
·        Up to 8-player online play (Nintendo Switch Online subscription required)
·        Over 300 enemies to combat, defeat, and plunder for loot
·        Over 20 Bosses and Events to truly test the player's skills
·        Endgame Celestial Invasion Event and the Moonlord final boss encounter
·        Over 20 Biomes and Mini-Biomes to explore, both above and underground – from lush forests to barren deserts to dungeons, the underworld, and even the terrifying Corruption await!
·        New Expert Mode designed to provide new challenges for even the most seasoned Terraria veterans - with the promise of greater rewards
·        Updated crafting with multiple added item options
·        Over 20 NPCs to discover, each providing their own benefits and unique style
·        More than 800 new items to discover – bringing the total item count to more than 3500!
·        In-depth building options that are easy to learn, but allow for amazing feats of architecture in the hands of a master

DR Studios and Re-Logic have also reported today the new free 1.3 update for mobile players, where every pixel of the game has been reimagined and hand crafted for the best possible mobile experience. Brand new controls and User Interface provide a level of polish and capability previously not available. Multiplayer is also now playable with up to 7 friends via local wifi or online, and new world sizes –the same size as on Terraria for PC.   The update also introduces the huge amount of content from the 1.3 update listed above. A complete list of enhancements and fixes can be reviewed on the official game forums at https://forums.terraria.org.

In Terraria, the very world is at players’ fingertips as they fight for survival, fortune and glory. Blending elements of classic action games with the freedom of sandbox-style creativity, Terraria is far more than a mere block-building game. In this side-scrolling adventure, a players' experience is limited only by their own imaginations as the world is theirs to shape and explore.
The release of Terraria for Nintendo Switch will make the popular indie game more accessible than ever, joining all other leading gaming platforms including: PC, PS Vita, PlayStation 3, PlayStation 4, Xbox 360, Xbox One, Nintendo 3DS, Nintendo Wii U and on mobile devices from the App Store, Google Play and Amazon App.
To learn more about Terraria, please visit: https://terraria.org/. To learn more about 505 Games and its products, please visitwww.505Games.com.