Posted by Ryan Moore on August 12, 2019
Recently, I reviewed the Philips Hue starter kit.  The dipping of your toes into the smart light era.  It's a cool device and worth the check out if you haven't already.

Today, I'm going to show how you can further augment that starting of your smart lights with the Philips Hue Play. 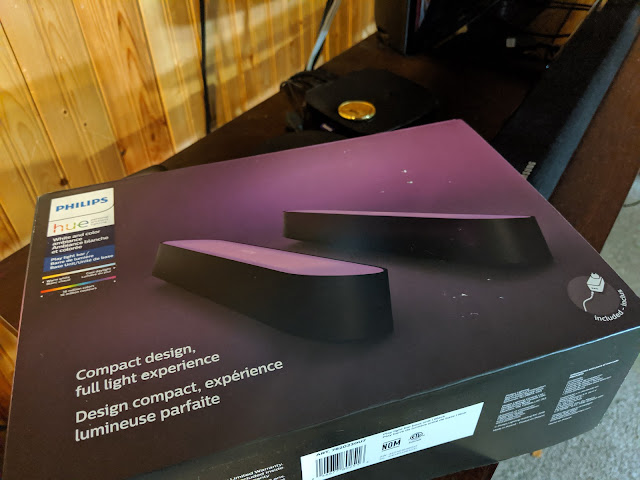 Now, with these, you'll still need that bridge from Philips Hue, as it's the main way all these devices talk to each other.  Apparently Philips Hue is looking to remove it in the future, but for now, you'll have to have one already ($64 to buy one on its own if you don't have the starter kit already).

Again, there's going to be a whole debate of "$70 for a light!" that you may have to have that inner monologue.  As I discussed with the previous, you're going to have to either have the disposable income to be okay with spending it and being like "neat" or really dig in to find the real feature that makes it worth the while.

Like the other lights, you start off by turning them on by plugging them in and then connect them with the bridge/app. 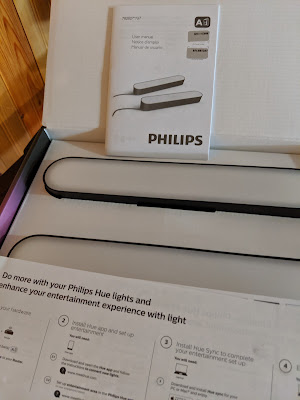 Essentially, they're a light bar that plugs in and then has the option to change lights and with the appropriate software, sync to sounds.

First off, you'll notice that the bars are probably a little hard to sit anywhere on their own, so they have 'stands' with them.

There are 2 types in the box.

The first type of stand is your typical L stand.  You screw it into one of a few spots on the back of the bar.

There's one by the cord, you can put it there if you're going to stand it up vertically.

There's one in the middle, you screw it in there if it's going to be horizontal (and mind which way you want the cord to go, so you can have it 'upside down' if you like). 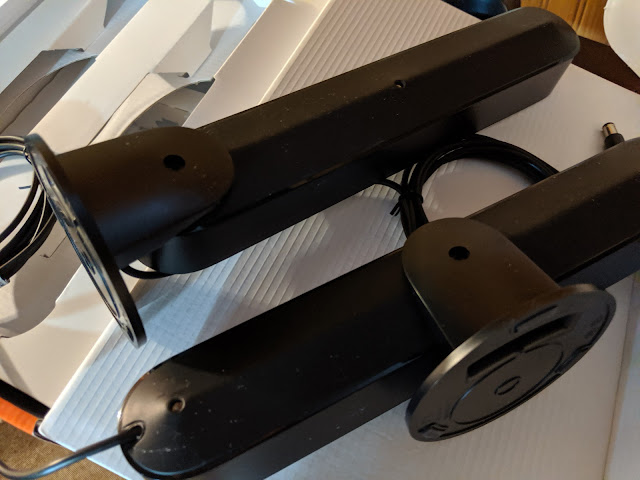 The second 'stand' it comes with screws in but instead of having an L 'foot', it has a spot where you can plop in a sticker so you can affix it wherever you want.  Back of a TV, back of the bookcase. 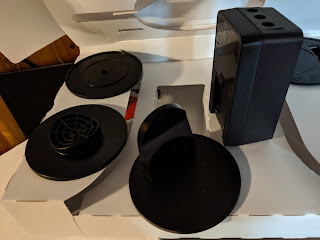 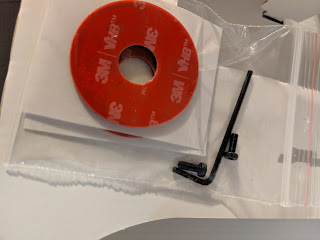 It allows it to be versatile.  Make the room yours.  Man, I need a better interior decorating sense.

It was also neat to notice that the cords will plug into a main plug for the wall, and that plug has 3 spots for lights to plug into.  So I could get a 3rd one I guess.

Once plugged in, you figure out where you want to go (and if you're like me, unscrew and reapply the stand for one of them so that the cord doesn't go in the opposite direction of where you thought it was going to) and put em down. 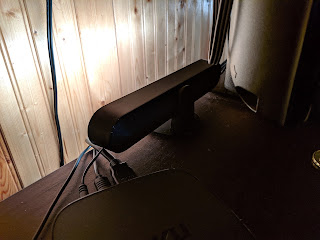 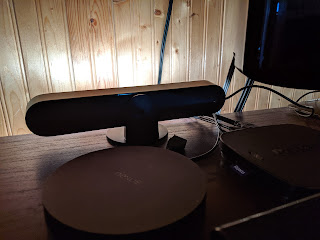 Having them both set up now in place you see what it looks like: 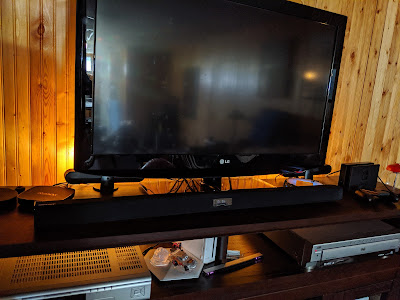 Okay, well, it needs to be darker to get the full effect.

But before I start fiddling, up to now they're just going to be like regular lights.  So you can turn 'em on and off, assign it to a room/zone, change their colour.  All manually like.

Now, the Plays were set up for more tho'.  More than just a fancy light bar.

It starts by you setting up your 'entertainment zone'.  Essentially there's a little room in the app that you show where your lights are virtually by dragging them around so that it knows its more than just a reading light.

Once that's set up (and I don't really know the difference why it's done this way) you then are going to need to go into your computer and set up the Hue Sync app.

There's no phone or tablet app, purely by the computer.    Which kinda stinks.  My computer is old and I don't like turning it on anymore, and it is near the TV where I put the speakers, but what if I wanted it upstairs on that TV where the computer isn't near.

So, I couldn't test out the 'rave party' option to see how it would react to what I watch. 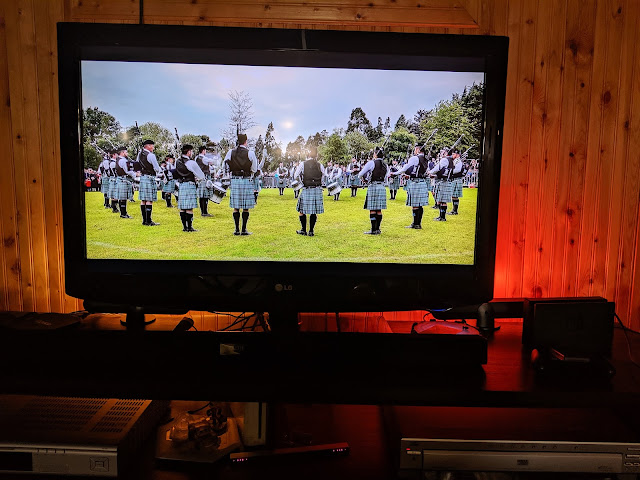 Darn this Pixel 3 getting a lot of light, hard to get a sense of this so I took a little video of it set on a lab of a colour cycle.

But again, the real value in this is getting to play with scenes, matching the accent colour lights with the lights of your stands so that you make real cool gradients.

Talking with an interior designer today she mentioned how the options are really limitless, depending on the person and the room etc...

They're $70 lights for sure, but they really help 'tie the room together' with the lighting.

If you're just putting it in for lights, I'm sure there are cheaper options out there to help you with this.  If you want something that you can change, play with and get ready to get your hands dirty to make it how you want, then it's a small price to pay comparitively.
accessories Hue hue play IOT Lights Philips Review SMART HOME smart lights