The Google Nest Hub - unbox and set it up

Posted by Ryan Moore on May 31, 2019
In my house we have 3 Google Home minis.  They've been awesome to have around.  with the better weather my son is using it to determine if he should bike, helps him with spelling.  I love listening to CBC in the kitchen while I do the cleaning up.

They're just great.  Except, I've never really figured out how the video portion of it works.  We have Roku, and they only just started to work with Roku, but I can't get it to do something like "Play Umbrella Academy on the Roku 3".

The new Nest Hub doesn't really solve that issue, but the fact it has a screen does go a long way.  We got our review unit the other day and the excitement had turned into arguments about where it should go. 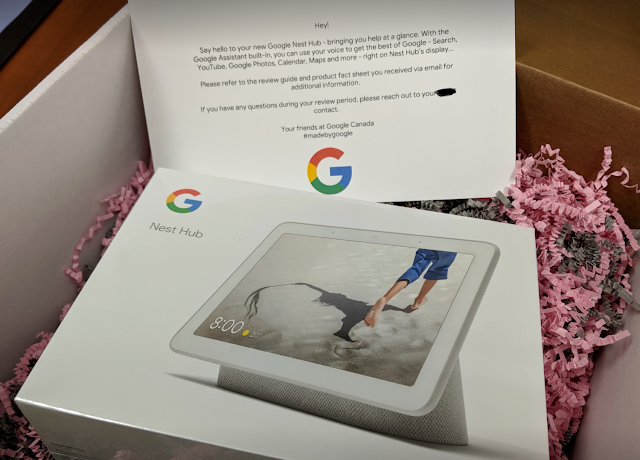 Should it go in the kitchen to help with our recipes?  Should it go into the living room (we've been meaning to even nix the TV there).  In the end we decided that it should go into Dean's room.


Well, I think he decided that.  I let him as often what he has been used it for is his homework and the tricky bit of 'how do you spell comics in French'.  Doing so meant he often had to say "can you repeat that but slower" a few times to get it all in.

With the screen, he now can see it actually spelled out and not have to have it repeated a bunch.

Essentially, this is a home mini but has the interface of a screen.  It costs $169 and the 7" screen does have touch capabilities.


The issue comes into the fact now that it's set up, it's set up under me.  So, even though Dean is connected and I've included them in my 'family' for the 'home' it's under the main items it shows on the screen (the to-dos, commute, etc...) are all mine.  I can't see any way short of wiping it and setting it up via his account initially to undo that.

Minor nuisance.  It makes me wonder if I should re-animate the ol' Moore Family Gmail account I had created a while back in a way to try to have one that encompasses us all... nah, sounds like a headache.

Otherwise, this is awesome.  We can ask a question, see the answer, get more context than just a verbal answer.  See images, play youtube.  My son's favourite thing now is to play some 'soothing sounds' just before bed.

What I did like was once we were all set up on the Home that whenever I ask it a question the little pop banner showing it's recognizing voice would show my face, and when Dean asks, it shows his.  So you can see it's recognizing who's who.  Smart.

I was surprised you couldn't use the device to directly play Netflix or other video services.  Stranger is that I couldn't from my phone cast Netflix to it.  Maybe it's a licensing thing to work out.

We'll keep playing with it - we think it's awesome.  Too awesome as now we may have to remove it from Dean's room as it's too easy for him to just start asking it questions in the middle of the night ... you hear this faint "hey google".