Upset over your cellphone bill? Hit up PayLessToConnect.ca

I heard that recently and hey, it's pretty close.  But not everybody likes hockey, there are some diabetics who can't have the amazing maple syrup (and it's not just Quebec, in my region there's an amazing maple syrup producer) or those weird Keto folks who don't want sugar.... pfft.

Anyways, more universal for us Canucks is the fact that we will complain about 2 things

1 - Weather: no matter where you are, it's an issue and almost a universal greeting to a stranger to strike up a conversation
2 - prices for internet: it's seemingly the highest on the planet.  Especially noticed if you leave near or travel to the US a bit and find out what they pay for internet.  Oi

If you have a specific issue to deal with (as I'm trying to go through with Bell right now) you can go through the CCTS.

But if you want to voice your upset over the system, there's a new process you can look at.  TekSavvy has set up "PayLessToConnect.ca". 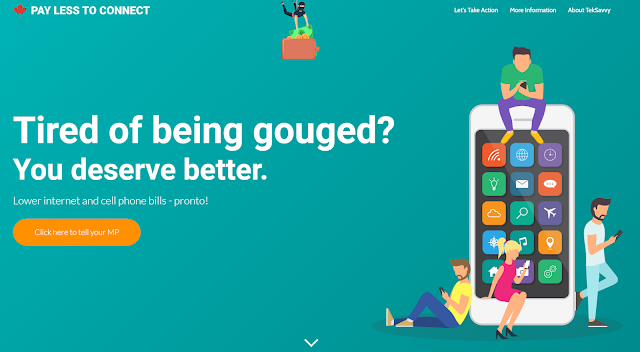 It's a means of trying to get a movement to send the government (CRTC and your local MP) the message that we are upset.

Tired of being gouged? Canadians can speak up, demand lower internet and cell phone bills at paylesstoconnect.ca: TekSavvy

CHATHAM, ON, March 29, 2019 /CNW/ - TekSavvy Solutions Inc. ("TekSavvy") today launched a website where Canadians can voice support for a new directive from the Government of Canada, which orders the CRTC to lower Canadians' internet and cell phone bills with policies that promote real consumer choice. The proposal is open for public comment until April 8.

TekSavvy hopes the CRTC will quickly fix policies that deny consumer choice and keep prices high, such as by removing the 50 Mbps Internet speed cap currently hampering TekSavvy's business in Ontario and Quebec, and finally opening up the wireless sector for competition. "TekSavvy fought and won the right to offer unlimited Internet to Canadians who were trapped paying for metered 'usage'. If the CRTC allows real consumer choice for wireless, TekSavvy wants to be able to bring unlimited cell phone plans too," added Gaudrault.

Consumer choice for Internet services remains under threat, said Andy Kaplan-Myrth, VP Regulatory & Carrier Affairs. "While the CRTC allowed TekSavvy to offer unlimited Internet, the big carriers inflated the wholesale rates for Internet 'usage' – in some cases by over 1300%. These unfair rates nearly drove smaller ISPs out of business and kept retail prices high for consumers."

In 2016, the CRTC rebuked the large carriers for breaking its rate-setting rules and called their behaviour "very disturbing". As noted in TekSavvy's filing with the CRTC today, the large carriers overcharged ISPs more than $300 million that would have otherwise been passed on as savings to customers or invested in new infrastructure.  The CRTC has not set final rates or refunded the overbilled amounts.

"Without companies like TekSavvy, the Internet market would look just like the wireless market today – no choice, no unlimited plans, and high prices," said Janet Lo, VP Privacy & Consumer Legal Affairs.  "This new directive to the CRTC will be a major win for consumers, so we are doing our part to rally public support. Today, we're asking the CRTC to repair the basic building blocks for Internet competition, so that it can apply these lessons to promote real consumer choice for wireless services too."
bills cellphone