Posted by Ryan Moore on February 25, 2019
So there's so much to talk about for phones right now... been crazy busy at work and life and meaning to get to it (jeez, where did I find the time to cover it all before when my kid was young and I could just stay on top of all the releases?).  So bear with me.  In the mean time - let's talk about something not phones.

Something that we still need - some sort of computer.  Me, I love my Chromebooks - still typing away with my Pixelbook as I write this.  But there are plenty of other options out there, depending on what you want. 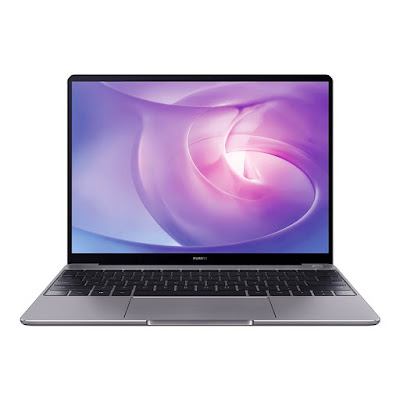 Recently, Huawei announced a few new Matebooks but it looks like only the Matebook 13 is coming to Canada in 2 varieties.

No official date for availability yet, but these Windows devices can pack a lot punch in a little unit.

The displays have some very thin bezels (but not as thin as the Zenbook).

It has dual USB-C ports on either side, similar to the Pixelbook - however only the left one is used for charging.  D'oh.

The fingerprint is the fingerprint sensor (makes sense) but neater, is that there's an NFC tag built into the device for quick sharing.

Check out the press release from Huawei below:

Richard Yu, CEO of Huawei CBG said, “With the advent of the all-scenario era, consumers are increasingly looking forward to revolutionary experiences. To support the hyperconnected 5G period, Huawei Consumer BG remains committed to the all-scenario smart ecosystem strategy. We will spare no effort to drive pervasive connectivity to individuals, office and homes, and create a world-leading 5G all-scenario smart living experience that is unlike anything that has come before.”

Combining craftsmanship with technology, HUAWEI MateBook X features a CNC machined metallic unibody with a premium sandblasted finish that gives the exterior a smooth hand-feel. Available in Mystic Silver and Space Gray, Huawei’s latest flagship is equipped with a 13.9-inch 3K Ultra FullView display with 91 percent screen-to-body ratio. Additionally, it supports 10-point multi-touch and the world’s first Fingers Gesture Screenshot[1] to give users a new, more intuitive way to interface with their devices.

An incredibly powerful device, the HUAWEI MateBook X Pro is powered by up to an 8th Generation Intel® Core™ i7 8565 processor and NVIDIA® GeForce® MX250 GPU with 2GB GDDR5. It also features broadband Wi-Fi, Bluetooth 5.0 and a more powerful Thunderbolt™ 3 port to support all-day productivity. Meanwhile the Dolby Atmos® Sound System delivers an immersive cinematic experience no matter where users find themselves.

Intelligent interconnectivity is at the heart of this new all-scenario experience. The HUAWEI MateBook X Pro supports HUAWEI Share 3.0 OneHop[2], a feature that solves data transmission difficulties between Windows notebooks and Android smartphones. HUAWEI Share 3.0 supports not only image and video transfers[3] between PCs and smartphones, but two-way document transfers as well. Screen recording, too, is easier than ever. By shaking the phone and tapping “PC HUAWEI Share” on the computer, a screen recording of the notebook[4] will be sent to the smartphone. Huawei has also developed a proprietary Clipboard Sharing feature[5], which lets users share copied content from one device and paste it on another nearby device, sharing one synchronized clipboard.

Targeting a young demographic, both the HUAWEI MateBook 13 and HUAWEI MateBook 14 feature a stunning and portable FullView screen engineered to have a 3:2 productivity aspect ratio and a minimalized bezel display supporting 10-point multi-touch.  Both notebooks support new convenience features like Fingers Gestures Screenshot[6], indicative of a consumer-first ethos.

The HUAWEI MateBook 14 is powered by up to the 8th Generation Intel® Core™ i7-8565U and the NVIDIA®GeForce® MX250 and stays cool with a shark-inspired design fan that supports greater heat dissipation. The 57.4Wh (typical value) large capacity battery and Huawei’s smart power saving solution combine to ensure a long battery life.

Meanwhile, the HUAWEI MateBook 13 redefines the standard for display, performance and cross-platform interconnection in the 13-inch mainstream notebook segment. It is powered by up to the 8th Generation Intel® Core™ i7-8565Uprocessor and the NVIDIA® GeForce® MX150 GPU, and is equipped with the HUAWEI Shark Fin Fans 2.0 supporting higher fan speeds and greater air output. The improved cooling performance of the fans helps the notebook stay cool and silent even when running intensive processes. HUAWEI MateBook 13 features a 3:2 FullView display with 10-point multi-touch option and a screen-to-body ratio of 88 percent.

To elevate the experience of HUAWEI PC devices, Huawei offers a smarter way for devices to interact with each other: HUAWEI Share 3.0, which features OneHop and Clipboard Sharing[7] to enable quick and easy smartphone-to-PC cross-platform smart interconnectivity. Other features designed with young consumers such as graduates and young professionals in mind include the Finger Gestures Screenshot[8], Fingerprint Button 2.0, Dolby Atmos® and more—fitting for those that require connectivity on the go and completing the all-scenario experience in which all devices from PCs to smartphones is connected.

5G Foldable Smartphone: HUAWEI Mate X
Reflecting the DNA of the HUAWEI Mate Series, the HUAWEI Mate X represents a voyage into uncharted territory. The HUAWEI Mate X combines 5G, foldable screen, AI and an all-new mode of interfacing to provide consumers with an unprecedented user experience and bringing forth a new breed of smartphone.

A result of Huawei’s bold experimentations with novel smartphone form factors, the 2-in-1 smartphone and tablet HUWAEI Mate X features a flexible OLED panel and a Falcon Wing Mechanical Hinge that blends style with technology. The lightweight foldable smartphone sports a new Interstellar Blue colour wave that epitomizes the beauty of technology and sets a higher bar for future smartphones.

The HUAWEI Mate X is more than a smartphone or a tablet—it is greater than the sum of its parts. The flexible OLED foldable FullView display and the world’s fastest 5G modem chipset Balong 5000 combine to deliver a new mode of interfacing, in which the large-screen experience and portability co-exist in harmony. In tablet mode, the HUAWEI Mate X is the ideal mobile productivity powerhouse. Multitasking is better than ever and users can take advantage of two screens simultaneously for multiple tasks and enjoy a desktop-like experience.

Huawei’s flagship smartphones have always come with powerful cameras, and the HUAWEI Mate X is no different. The foldable design makes it possible for the camera system to play the role of both front and rear cameras, resulting in a revolutionary photography experience.

Possessing leading capabilities in chip, device and communications technologies, Huawei is poised to lead in the 5G era. Equipped with the world’s first 7nm 5G multi-mode modem chipset Balong 5000, the HUAWEI Mate X will be the benchmark of 5G smartphones to come.

Powered by Balong 5000, the Huawei 5G CPE Pro supports both 4G and 5G wireless connections, setting a new benchmark for home CPEs on a 5G network: a 1GB HD video clip can be downloaded within three seconds, and 8K video can be streamed smoothly without lag. In addition to homes, the Huawei 5G CPE Pro can also be used by small and medium-sized enterprises for super-fast broadband access.

In the upcoming 5G all-scenario intelligent era, Huawei has the leading capability to execute on its all-scenario strategy.  Huawei is the only manufacturer with a full-range of end-to-end 5G product, covering chipsets, edge and cloud services. Huawei is committed to enriching the connectivity experiences in 5G use cases, and delivering the ultimate all-scenario smart life to consumers.