Posted by Ryan Moore on January 05, 2019
A lot of people have made resolutions for the new year to be more active.  My gym is definitely busier the last few days.  Whenever I go to the gym, whether it's busier or not (but definitely more so when it's busy) I NEED my tunes.  I need that distraction, I need that tempo/cadence.

There are a lot of headphones out there to choose from, so why not add one more to the options.

These are the Jecoo Bluetooth Headphones, currently running at $28CDN at Amazon.ca. 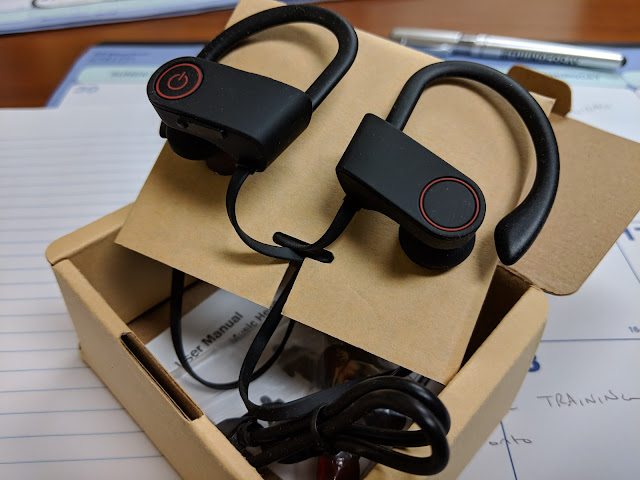 They're comfortable little rubbery earbuds with the hook.

The hook is definitely something that helps when jogging.  If you're just walking to the subway or jamming on tunes at the office, it doesn't matter; but for buds like these that are meant to be bopping around at the gym (they're IPX7 rated so you can sweat away with them) it's a real plus to not worry if something is slipping out.

The downside is that the hook isn't adjustable, depending on the height of your ear.  It fits me just fine.  You can adjust the rubber 'pad' of the ear cone as they have a couple extra in the box.

Speaking of what's in the box, you get a tiny microUSB cord to charge it and a very basic manual. 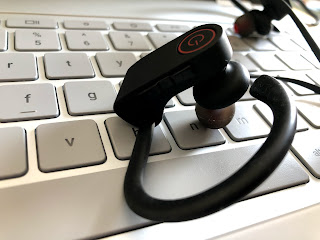 Operating the unit is done via all controls on one side.  It's the standard MultiFunction Button (MFB) - the big red button on the side - and then a +/- button on the top of the unit.

In this scenario, the MFB acts as the power (long press to turn on/off) and then the Play/Pause control.

The +/- acts as volume for short presses and then skip/prev for longer presses.

Now, the device I was sent had a real finicky button.  The + if you just hit it casually registered a - touch.  You had to really be cautious on how you press it ... really careful on where etc...

Were it not a review device I'd have asked for a replacement right away.

Pairing to a device was simple.  Out of the box, when you turn it on it was in pairing mode (it'll be called the U8).

To change pairing from my phone to my Pixelbook was a pain.  There was no way to set the device into pairing mode... you had to power it on, but instantly it would connect to the Pixel 3 XL.  So to avoid that, I'd have to either get my Pixel 3 XL to forget the device, or just turn off Bluetooth.  Then while it's searching for it, I could get the Pixelbook to connect.

If I didn't tell my phone to forget it then there were issues if both devices were on and close when I turned on the headphones.  Wish it were easier. 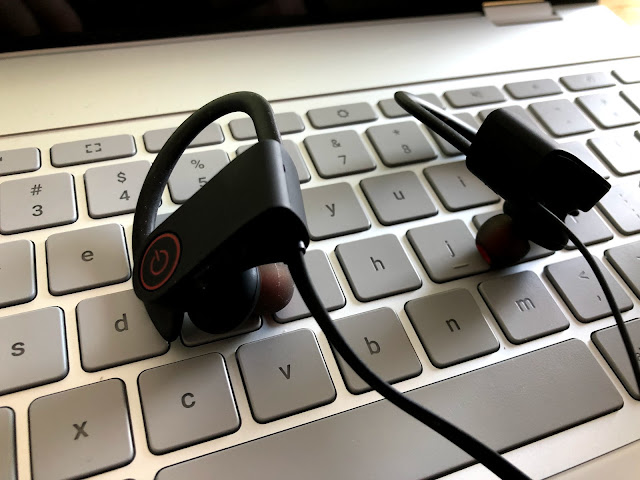 Overall, its not a bad set of headphones, the button issue aside (it eventually just stopped working for the + button).  The volume isn't too loud, which is good its right in your ear canal, so it's tolerable.  The sound is a little thin, not too much bass (not that I listen to much bass'y things, but it's noticeable that it's a very flat EQ), which is fine by me, as I listen to quite the range I want it even.

Battery life is good.  They say 7-8 hours, but after about 2 hours of use around the house and just under 2 hours at the gym and it was getting pretty low.  Easily charged tho' between each use tho' and it does not take long to charge the batteries.

They're not the best headphones I'd ever used, but by far not the worst either.  Just don't be afraid to ask for a replacement if the buttons aren't working.
accessories audio bluetooth earbuds earphones Headphones jecoo Review