intelliARMOR Scout on IndieGoGo is your Swiss Army knife of powerbanks

Posted by Ryan Moore on December 18, 2018
I've reviewed a few portable chargers in my day.  Some are awesome, some are ... not.

In this day and age, as good as the batteries have gotten in our phones, I still think that something is needed for the average person.  Take my typical day yesterday... go to work and I was in meetings for most of it, some on site, some off.  When I go off-site I don't have my charger near me.  I only had a 10-20 minute drive to charge up my phone.  It might not be enough.  Then I went to the gym after and had a meeting to go to after that.  I wasn't home until late.  I needed my phone to be working all day.

And, because I'm one of those weird people that want to have a device for work and a device for play (and I like to have a mix, so work uses an iPhone and play is my Android) I need to have different adapters/plugs.

I could keep different cables with me, or adapters, but they can be a hassle.

Let's introduce the SCOUT by intelliARMOR.  I'm calling it the "Swiss Army Knife" of  portable chargers. 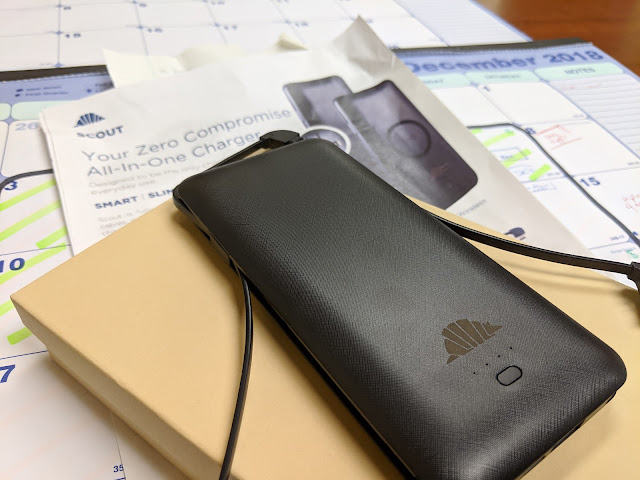 So, built by intelliARMOR, a company who already makes several dozen different types of accessories, I feel they have some capacity to know what they're doing; so despite the fact it's an IndieGoGo campaign, I feel assured they can deliver.

The idea is that you "Charge Anything, Anywhere" and has my favourite 2 features of portable powerbanks built in. 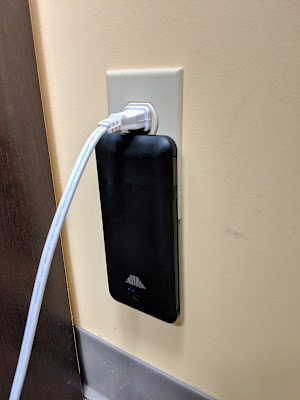 First, it has the AC plug built into the unit.  That makes it super easy to charge it.  No trying to find a microUSB cable (they're getting rarer around my house) to charge it - although, you could it you want - just plop it on to the wall and it charges up.
The other feature is that the cables are already attached to the device.  So no extra cables to carry around. 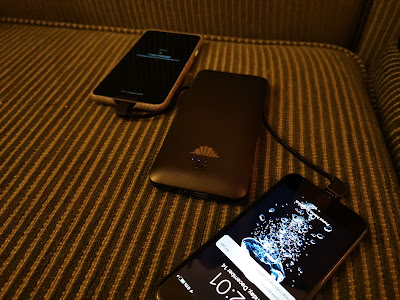 Everything's already all there.  A microUSB cable output, a lightning plug and a USB-C.  It even has a USB-A port (2.1A output) if you don't think 3 is enough. 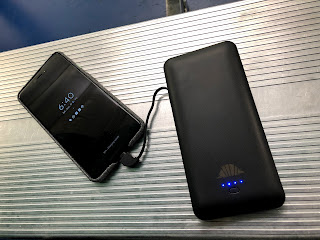 It also auto-senses the connection of a device to turn on the charging.  I have had a couple other banks where I've forgotten to hit the button after I've plugged it in.  No worries with the Scout!
Currently the Scout comes in 2 models.

Best of all for me with the Pixel is that the USB-C output is recognized as a 'rapid charging'. 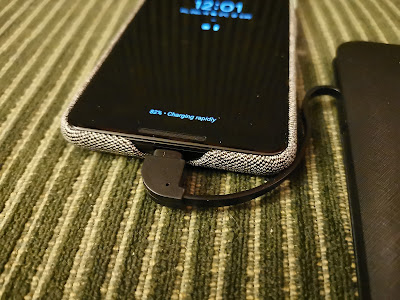 Either are the same price, so you would have to determine which is more important to you.  HUGE bank of power, or Qi.

Right now on the campaign, the early bird price is $25USD ... which is a great price for what you get.  You could get both for just $39USD.

It's a bit of a wait to get them in a few more months (expected delivery would be March '19), but a great deal, and I have the confidence that this company isn't just about to pull up stakes and disappear... heck, they were able to send review units out already.

I'm torn, 10Ah is HUGE.  It's great to not ever have to worry about if it's got enough... but Qi is always useful (I purposely chose to get the work iPhone 8 just to have Qi in both my phones).

The device isn't that much bigger than the Pixel so it's okay to keep in a jacket pocket (it can fit it my pants pocket, but it's a little awkward looking and feeling).