You can get Amazon Prime Video on Roku now

Posted by Ryan Moore on October 01, 2018
Was just listening to an interesting article about the changes in the consuming behaviour of people these days.

We really don't watch TV when it comes on anymore.  I was trying to give my son some perspective as we sat down to eat and turned the TV on - the arguments we had when we were younger about who gets to watch what... now we can always say "it'll be on later, you can watch on demand". 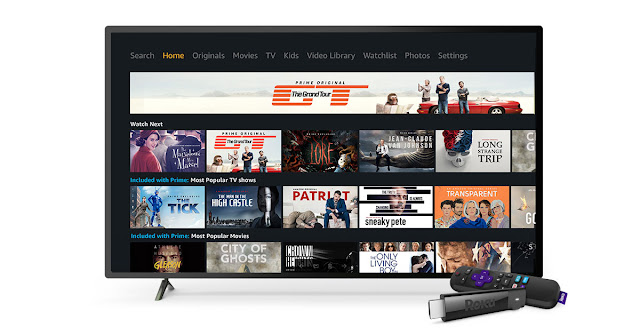 See below for more information from their press release

LOS GATOS, CA – October. 1, 2018 - Roku Inc (Nasdaq: ROKU). today announced that Amazon Prime Video is now available on the Roku® streaming platform in Canada. Prime Video offers Roku customers easy access to a popular collection of movies, TV episodes and Prime Original series available exclusively on Prime Video to instantly stream at no additional cost to a Prime or Prime Video membership.
“Prime Video offers consumers access to an exciting entertainment selection that can be streamed in HD and beautiful 4K HDR image quality,” said Tedd Cittadine, vice president of content distribution at Roku. “Prime Video is a very popular entertainment destination on our platform in the US and UK, and we expect it to be a hit in Canada.”
With access to Prime Video’s extensive collection of popular and award-winning Prime Original series, movies and TV shows Roku customers will be able to instantly stream popular titles available in HD and 4K HDR such as the recently released Tom Clancy’s Jack Ryan starring John Krasinski, Emmy and Golden Globe winner The Marvelous Mrs. Maisel, American Gods and new seasons of popular favorites like The Grand Tour, The Man in the High Castle and Goliath, starring Golden Globe winner Billy Bob Thornton. Customers can also look forward to upcoming series like the highly anticipated Prime Original series Homecoming, starring Julia Roberts, directed by Sam Esmail (creator of Mr. Robot) and coming to Prime Video on November 2.
“Our focus with Prime Video has always been to provide great content for our customers around the world. Part of that lies in making movies, TV shows and Prime Original series like Tom Clancy’s Jack Ryan easily accessible and simple to find,” said Tim Leslie, Vice President, Prime Video International at Amazon. “As we expand access to Prime Video on the Roku platform around the world, we look forward to making our service available on new devices for customers around the world.”