Posted by Ryan Moore on August 31, 2018
Back over in Berlin, the IFA continues on and announcements are rolling in about all the neat things being talked about.  And I'm sitting here, looking out my rain-soaked window stewing about how I could have been there... le sigh

Today, Huawei announced 2 things - a new Kirin 980 chip and a new colour style for the P20 Pro for us Canadians

You can read below for the full media release. 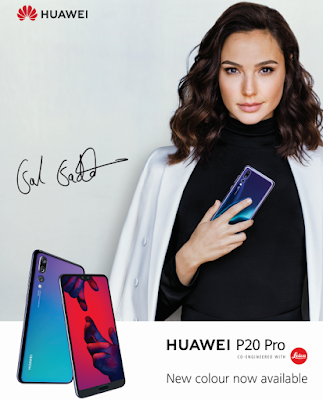 Essentially the new chip is better than last year's 970 and is readying for their next device (a new Mate?  I was thinking it would have been announced today).

Then there are new colour 'gradients' for the P20 Pro, 2 of which aren't coming to Canada, but the "Twilight" style will be coming and will likely be shown off at TIFF (they're a sponsor and the phone will be the 'official smartphone of TIFF 2018').

Oh look, there's a shot of Gal Gadot holding the phone with the new colour style.

Who wouldn't want a phone that even Wonder Woman uses?

They also released a "Morpho Aurora" and "Pearl White".

Check out the full release:

“Last year, we showed the world the potential of On-Device AI with the Kirin 970, and this year, we’ve designed an all-round powerhouse that not only features outstanding AI capabilities, but also brings cutting-edge raw performance to consumers,” said Mr. Yu. “Equipped with all-new CPU, GPU and Dual NPU, the Kirin 980 is the ultimate engine to power next-generation productivity and entertainment applications.”

The Kirin 980 chipset will make its way to Canada later this year in the next highly anticipated HUAWEI device.

Starting September 6th, HUAWEI’s Twilight P20 Pro will be available to Canadians at Bell, Rogers, TELUS and SaskTel. The Twilight is an iridescent and gradient colour created by applying eight alternating layers of oxides and nitrates on the glass – five layers of colour coating, one diamond-like carbon layer and two layers of anti-fingerprint coating. Making its Canadian debut at the 2018 Toronto International Film Festival (TIFF), the HUAWEI Twilight P20 Pro is the Official Smartphone of TIFF 2018. The HUAWEI P20 Pro was recently named Best Smartphone of 2018 by EISA (European Image and Sound Association), and will be capturing all of the excitement from the red carpets to the TIFF x HUAWEI Portrait Studio.

The Kirin 980 is also the first SoC to embed Cortex-A76 cores, which are 75 per cent more powerful and 58 per cent more efficient compared to their previous generation. In an octa-core configuration, the CPU in Kirin 980 is comprised of two high-performance Cortex-A76 cores; two high-efficiency Cortex-A76 cores; and two extreme efficiency Cortex-A55 cores. To take full advantage of this unique configuration, HUAWEI developed an innovative Kirin CPU subsystem with Flex-Scheduling technology that flexibly allocates the right cores to the right tasks. This solution designates the large high-performance cores to handle immediate, intensive workloads; the large, high-efficiency cores to provide sustained performance; and ultra-efficiency cores to tackle everyday, light activities with extreme power efficiency. Running at higher clock speeds compared to the prior generation, Kirin 980 enables quicker app launch times, better multi-tasking and a generally smoother user experience.

The latest Kirin SoC represents a new era of On-Device AI. The Dual NPU Kirin 980 elevates the On-Device AI experience with greater processing power and intelligence.The synergy between the Dual NPU results in an image recognition capability that is greater than the sum of two—the Kirin 980 can recognize up to 4,600 images per minute, up 120 percent compared to Kirin 970, further demonstrating Huawei’s industry leadership in the On-Device AI space. Additionally, Kirin 980 supports common AI frameworks such as Caffee, Tensorflow and Tensorflow Lite, and provides a suite of tools that simplifies the difficulty of engineering On-Device AI, allowing developers to easily tap into the leading processing power of the Dual NPU.

In pursuit of the best smartphone photography experience, HUAWEIintegrated its proprietary fourth-generation ISP into the SoC. In addition to a 46 per cent increase in data throughoutcompared to its predecessor, the new ISP also provides better support for multi-camera configurations, as well as an all-new HDR color reproduction technology that can manipulate picture contrast to highlight objects on various parts of an image. In addition, Kirin 980 utilizes the Multi-pass noise reduction solution that accurately removes artifacts without scrubbing away image details, resulting in better quality on images taken in low-light scenarios. Another new feature of the ISP is improved motion tracking. When a user attempts to snap a photo of a moving person, the ISP can still recognize the subject with 97.4 percent accuracy, so any user can capture fleeting moments with ease.

The rise of video-centric social media platforms brought together with it a surge of demand for video capture features. Kirin 980 adopts a new pipeline dedicated to processing video captures, allowing the camera module to shoot videos with 33 per cent shorter delay.

To deliver the best connectivity to users of Kirin 980-powered devices, Huaweiintegrated the world’s first modem supporting LTE Cat.21 with a peak download speed of 1.4Gbps. Additionally, the Kirin 980 supports carrier aggregation, even across frequency bands, so users are free to choose their mobile operators and still enjoy the same premium connectivity experience, regardless of where they are.

At IFA 2018, HUAWEI also announced the launch of two new gradient variants for the HUAWEI P20 Series: Morpho Aurora and Pearl White, expanding its range of gradient colours to four. When creating these two unique hues, Huawei once again turned to nature for inspiration. The Morpho Aurora was inspired by the Morpho butterfly, while the Pearl White exudes the same elegance as the iridescent mother-of-pearl. The new gradient variants are now available at HUAWEI Authorized Retailers. For more details, please visit HuaweiCanada.ca.

The next-generation AI experience is around the corner. Stay tuned for the launch of the first Kirin 980-powered Mate Series device, which is scheduled to arrive in October*.
huawei IFA Kirin 980 P20 Pro