Posted by Ryan Moore on August 30, 2018
I love smartwatches.  I would not be caught without one anymore.  And I need it to be a timepiece, but I also want to run with it, put music on it...

So, Wear OS is where I'll always look.  My older 360 Sport is starting to show its age these days so I'm starting to look for something new.  Lots of the options are sleek out there, but I want something that could take a bit of a beating.

Let me introduce you to the Casio PRO TREK.  This is the WSD-F20 model (there was just the announcement of the F30, but that won't be available until January 2019), and man is this thing big. 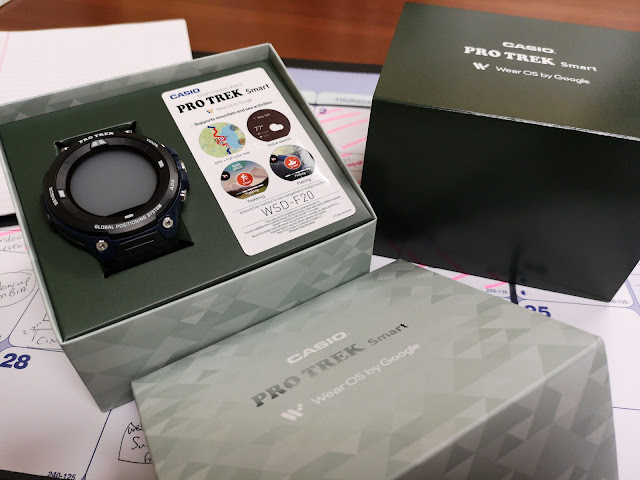 Now, along with the large feel of this watch (it almost dwarfs my 360 Sport) it also will hit your wallet fairly hard as well.  This is a $500CDN watch via their site (and found on Amazon and others for way more).

Is it worth more than say the Galaxy Watch?  Let's dig in.

First up, let's talk the specs of this:


So the most important bit I think we find as you look at those specs is a 'second display?'.  I want more information.  We'll get to there.

I first want to talk about the physicality of this thing.  If you're a GShock kind of person, you're familiar to this size... this bulk ... because you want it to be able to get knocked around.  But it's big.  It feels big.  Not so much heavy, but just big.

The strap is very bulky and feels like a bit of cheaper rubber/plastic than I'd had in older Casio watches.  I was hoping that it would 'relax' over time but hasn't really happened yet.  It feels pretty much like a 'spy watch' we bought my son where it's just plasticy and clunky.

The strap also is 'hard' for me to fit.  The strap doesn't have much 'give' as you pull it through the loop and the little latch has a hard time getting into a spot.  It's gotten slightly easier over a week and a half, but not by much.  And, the holes don't seem appropriately spaced for my wrist.  It's either too tight or too loose (and with the bulk, it'll swing around and find itself on the side of my wrist ... very awkward).

The housing itself looks sturdy, but if you press on certain areas it has a 'creak' to it like it's not quite together (or maybe that's just some of the waterproofing stuff in between the seams).  Just feels weird, but easily ignored day to day. 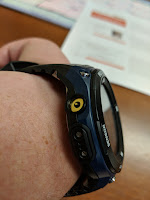 Going around the watch you'll see that it has a typical Casio backplate, which means there's no heart rate monitor, also, there's no Qi charging... so it has a proprietary charger.  And replacements/extras are not so easily found.

It connects via a bit of magnet but it's not so strong that if the cord is slightly askew while it's laying down it may pull itself free.

Looking over the watch from the box, before I turn it on, you see it's got a really 'murky/whitish/greyish' look to the screen at a certain angle.  I thought it poor quality at first, but quickly realized that it's the secondary display. 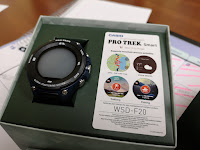 Now, I'm not sure exactly how it works, but Casio has done the awesome job of fusing 2 displays in one.

Hearing that you might go "yeah, so what... big deal.

It actually is.  I've had a few times where I go on a trip and forget my charger, or just my battery drains to the point htat ... crap, now it's just a weight on my wrist.

Well, this secondary monochrome display is just that... when the battery runs low, or you want to save some battery, switch it to the "Timepiece" mode and it's a neat LCD display. 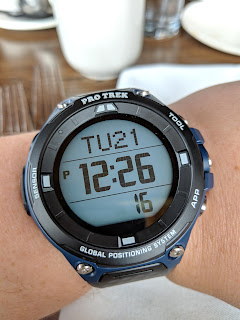 I have the watch set where the 'always on' is turned off, so whenever the display times out it switches off the TFT and then the LCD shows up.  So it makes finding the time even easier.

While we're talking about the secondary display, it tends to be a matter of battery, so let's talk battery.

You'll see in the specs up above I have question marks.  Well that's because we just don't know what the mAh of it is to compare against other watches.

I noticed that if 'always on' was left on, I could get to the end of the day (about 8am until 11pm) it would still have about 20% battery left.

With 'always on' off, it would be 51% for the same time.  (I did about 2 hours of 'activity where I was biking and measuring and found that by the end of the day it was about 35'ish%)

So that secondary display really saves the battery.

I just wish you could customize that Timepiece display... ah well.

There are 3 buttons on the side, one's to launch the apps, and the 2 other are for their own (but you can remap it to a shortcut you want).

Now it's on the wrist, let's go through it.

Wow, for pretty much the same specs as my Sport 360, it feels a lot more fluid. 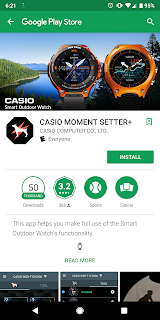 There are a few Casio apps in there and you have a phone app to control one of them called Moment Setter.

The "Tool" button is what this works with and it brings up a few funky screens that have information.

It's supposed to be: Compass, Altimeter, Barometer, Sunrise/Sunset, Tide graph, and 'my graph'.  But for some reason, it doesn't always show all of those when I click the button and swipe around there.

That's alright, to be honest, those features don't really appeal to me.

In the app you can also set up the Moment Setter for different activities.

So you have a few options for climbing, fishing, cycling etc... you start the activity and it keeps track for you like any activity tracker.  The settings has options for when do you want to be notified for whatever milestone you've reached during that activity.

To be honest, it's a little confusing.  The biggest upset for me was that I would set it up for a bike ride, go and then finish and it would go "hey you went X far in Y time".  And then I'd pat myself on the back and then it would disappear so I could never see it again.  Luckily, Google Fit would auto track that activity for me so I could go back and see what I did and where and for how long.

There's the Timepiece app which essentially shuts off the smartwatch part and you get the LCD display only.  To bring back the smart features you have to power it back on.

The App button is where I notice that it's pretty sluggish.  That button brings up a map and it looks like an early Android 1.0 Google Maps app.  You can use a button to magnify or zoom out (or if you want to get your fingers in and pinch and expand).  With this, you can mark places on the map and leave a memo.  I was hoping you could trace a route, but nope.  Same with any hiking, it doesn't seem to (or at least that I can't find) trace a route for you to either follow again or retrace to get home.

Outside of that everything else that Wear OS can do, this can do and it does it well.  I have to admit, everything seems fairly fluid and no real lag at all.

So, it may be more than a 'flagship' Galaxy Watch, which isn't a sport, but isn't a fashion model... but you gain the full "G-Shock" style of it.  And the battery can last 2 days, so definitely a day is fine.  And when I went camping on a weekend I just left it in Timepiece mode when I knew I wasn't going to be using the smartwatch features, and it barely used battery power during that time.

If your need is more for the outdoor enthusiast than the money is well spent here.  If you're more middle of the road (not quite outdoorsy ALL THE TIME, more 'business casual') then it may be a bit overkill for you.