So a while ago I did a quick review of the Jurassic World Alive game.

It's pretty fun ... you can read it here if you like:  https://www.androidcoliseum.com/2018/05/the-dinosaurs-comes-to-your-phone-with.html

Oddly enough I've become quite the fan of the game and play it fairly regularly now.

I'm not bopping up and down all over the city, but when I get a moment with the phone I take a peek at the map and see where I can send a drone off to get DNA.

Anyways, it's been fun.

Yesterday they brought in an update with some new features. 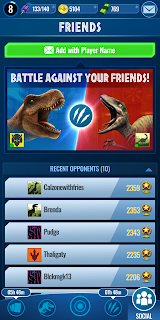 First up is the friends area.

There was the 'arena' area where you battle other players for a ranking and a chance to get incubators.  Which really starts to play a big portion of the game.  Chances to get DNA you might not see otherwise, extra coins and darts.

Now, you can add a friend and 'battle' them.  I haven't tried it out to see whether it's a 'live battle' or just a computer-generated battle against their team.

But you have 'friends' now.

Additionally, you also get a 'history' of your arena battles to see who it was you were up against and what levels they were (like "what WAS that hybrid that knocked my guys out?").

There are some graphical improvements to the game where it has dusk and day looks to the scenery and the stops are now a contrasty orange (special events are still green).

You also can't watch a video to skip ahead the 15min wait time before you can spin again.  That's gone, except for in special drop spots (i.e. parks or events).

There are even some new drops or adjusted locations, which is really helpful. 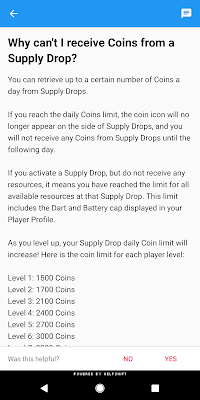 And something I don't think was in there previously, but just noticed now is a daily limit on how many coins you can acquire.

Which sucks, as now that I'm levelling up my squad to some good levels it's REALLY costing to power them up.  Like 8,000 coins a power up.  So my personal limit of 3,700/day would take me 3 days to get enough for one power up.

That seems pretty silly and petty to limit that.  Just a drive to make you want to pay more.

Mind you, you can use your 'cash' to buy coins, or win more coins with more battles or incubators.

Anyways ... an update is an update.

What do you think?  Do you play at all?