Posted by Ryan Moore on June 14, 2018
So, I had left my rootin' and rommin' days back in the past.  I haven't loaded a custom ROM or unlocked a bootloader in ... ooh, quite some time now.

I want my device (potentially) bug-free.

Then the other day they announced that the Android P beta version DP3 was out and ready to be installed on compatible devices.

I checked the list, and of course, my Pixel 2 XL was there (still bummed that the Canadian Sony XZ2 isn't listed).

I hm'd and ha'd about it for a bit.  I was out of town at the time and didn't want to get stuck with issues or have to reset my phone while I was away from home.

But I took the plunge and installed it.

Then after reboot, my phone stalled ... like no response while I was swiping down the notification shade.  Twice!

Really panicked ... what did I do?

Third time it hasn't had a problem since (well, once now a week later, but still... pretty stable).  And I like that it's as stable as it is.  No big hiccups or anything.

So what's new, what's awesome, what's not?  If you've watched the above video, you probably already have my scenario, but let's run through it.

First up, I noticed that the clock is switched.  It's now on the left hand side.  So we've reduced the 'width' of the right hand (and you'll even notice that Bluetooth 'B' isn't there until it's actually connected to something), but then we start populating the left hand side with notifications too.

Speaking of notifications, you're now getting some further 'threading' in messaging apps.  So if you respond in-line you can see a few messages more than just the latest.  Also, what was really kind of a pain at first was that if you want to 'reply' you have to really click that 'reply' word, whereas in Oreo and earlier, anywhere on that line would open the text entry.  Now only just that little target, hit the wrong spot and you leave the app you're in to go to the notification app.  Ah well.  Lost a few Boom Beach battles because I left the scren.

Another cool feature around notifications is that the system learns and will ask "do you want me to keep showing this notification" if it's something I often swipe away.  Makes you think.  Thanks Google. 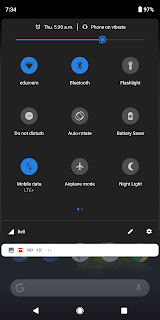 Staying with the notification area, as you pull down the shade, you get the quick toggles.  Now it only shows 6 toggles and when you swipe down further you can see 6-11 more.

Previously, you could swipe down the first level and slide the toggle bar to see further ones.  You can't now.

Plus, in Oreo you could swipe down to the first level and then see the 'Settings' gear.  Now it's only viewable at the second level of swipe down.  Double poop.

My most unfavourite change up is the in the multi switch area.  So, standard navigation buttons you have the multi-task button and you are brought the 'task viewer' (I'm totally making up the actual names here, sorry).  Where it was like a deck of cards vertically, it's now horizontally.  Meh.  But worse, instead of 'stacked' they're separate whole 'cards'.  So if you want an app a few apps ago you really have to swipe through. 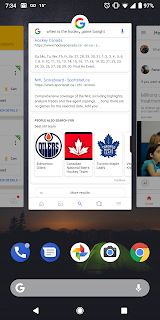 I get it tho'.  With a bigger / fuller view card, you can do more.  There's the option for that app you can see, and you can even long press on the card to select text on it (that's kinda handy, and it even works on areas that weren't selectable text while you're in the app). 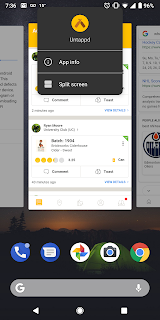 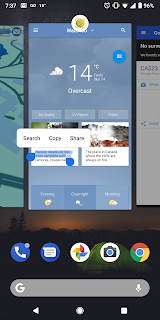 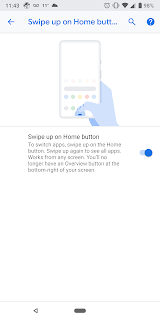 You can get rid of the navigation buttons and just go with the home and back buttons and have to use a swipe up gesture (from below the screen) to bring up the task switcher.

You now get a cool rotation lock feature.  So where you can click the toggle for auto-rotation it rotates EVERY time you tilt the device.  Toggle it off and it'll never rotate. 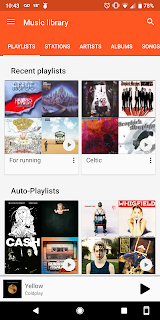 That's how it used to work.  Now, toggle on works the same, but when the toggle is off you now get a mini little animation next to the multi button showing the screen rotating.  It's alerting you that the screen could rotate, and if you tap it, it'll manually rotate for that one instance.  Pretty handy.

If you read books and then lay down on your side it'll help prevent you getting the screen to re-render itself. 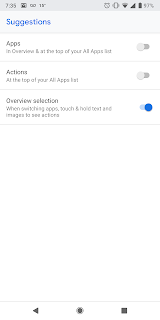 
For my last thought about it, I'm going to give you a bit of a story.  I like to play games on my phones.  Not a lot... but one of them is Boom Beach.  And seconds after tapping the icon it plays the iconic sound for Supercell...

Usually, before I do that, I like to tap the volume button to make sure the media volume is down.  If I was in an app that's not using the media volume, it shows 'ringer' or whatever and then there'd be a button to tap to bring down and show the other volume settings.  So, easily I could tap the drop down, and adjust the volume slider for media volume.

I got used to that ... and when I have a new system I launched the app while I was in a course and loud as could be everybody knew within a second that I was playing video games.  Woops. 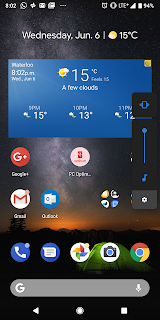 The volume toggle now shows on the right hand side, which is neat because it's next to where your finger is and it looks intuitive.

Except that you can't adjust any other volume than the one that's being used now.  So, if I was in the homescreen, tapping volume only adjusts the 'ringer'.  If I want to adjust the media volume and not be using something with media, I have to tap the little gear and then I leave the app.  Boo.

I loved that little volume slider dropdown and I've filed my 'bug' to have them bring it back... hopefully.

Anyways, that's my thoughts on it so far.  It's not bad, there's bits I don't like, but there's really not anything in it that's making me go "OH GOD WE HAVE TO ALL GET UPDATED TO IT NOW".

Have you given it a try?  What's your thoughts?