Posted by Ryan Moore on May 16, 2018
When we had microUSB cables we had to worry about what way we plugged in the cable... was it upside down?

We kinda envied the lightning connector.

Then we had USB-C.

Despite that, we still had to plug the cable actually in.  This is why I love Qi charging.  The minimal amount of effort needed and I get my phone topping up.

But wireless charging is slow.

The Anchor cable sets out to help solve that by allowing you to connect your phone for charging (and I guess transferring data, but who does that in this day and age of 'cloud'?) with minimal effort. 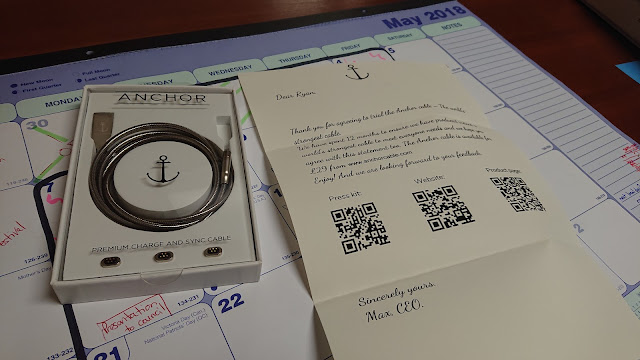 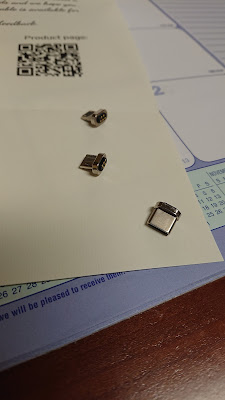 They do this with a neodymium magnet in the tip of the cable that connects to a plug that you leave in your phone.

This is nothing really new, to be honest.  Macs have had a mag adapter for some time, and there has been a bunch of magnetic tip accessories for this in the past, Znaps comes to mind.

So the cable, which is available on Indiegogo after it's been successful on Kickstarter runs you $40USD.

This comes with 3 tips, a microUSB, a USB-C and a lightning.

You can buy more tips at $7USD each.

You plug the tip into the phone and you leave there. 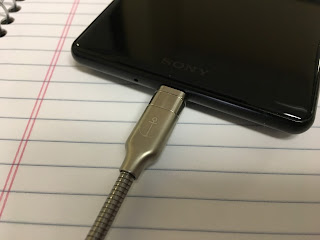 Then you have the 4' cable.  One end is obviously the USB connector to go to the charging wort of your choice, and the stub end of the cable has a magnet that automagically attracts to the end.

Works as intended.  It's pretty snazzy.

And that cable... that cable is awesome I do have to say.  They sent me a prototype before they put on the magnetic end and it's been awesome.  The metal feel gives me the confidence that it's going to resist some bending (the back of the box reminds you they've flex tested it 60k times without issue ... if you flex/bend it 100 times a day, that's almost 2 years of use).

Well, a couple issues that do need to be addressed with it.

First up is the connector itself.  Sure it's not at all that big or noticeable when left in, so no issue there really.

But when you look at the connector there's a directionality to it. 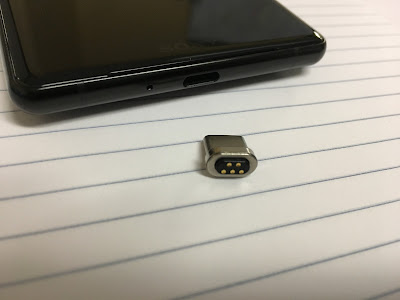 There's 3 pins at the 'bottom' and 2 on 'top'.  Now with lightning or USB-C it won't matter which is top ... but the cable will care.  It'll snap to it only once it orients appropriately.

Keep in mind tho', it does this to ensure that the right pins line up to the right pins and doesn't have any shorting going on.  Other cables that let you 'go both ways' means that the cable's nub end has to be HUGE... and Anchor's is tiny.

So, a little bit of a 'oops' there.  If you approach the cable to the adapter upside the cable will try to flip.  Not a big whoop-dee-doo, but still.  Using C or lightning the point is to not care which way I'm approaching.

The big elephant in the room here is the fact that you've just married your phone to that cable ... 'forever'.

Once you plug the tip in (and you hope it stays in and never falls out, or that's another $7) the only way you can charge it is with that base cable.

If you're like me you have charging 'spots' all over.  Night table, living room couch, computer, office desk, car, etc...  Not even to mention the portable batteries spare charging blocks for travelling etc...

So, to want to take advantage of the 'nub' you have to bring that cable EVERYWHERE.  Or buy just the cable.  I can think that I'd have to buy at least 5 or 6.  And that's just for me.  And then my wife who doesn't have the tip on her phone can't use it (though I have multi USB ports for charging) so I might as well buy her a tip too.

So this might get a little costly (and they don't list the price for just the cable).

If it's a superior solution, then it's going to be worth it, but for me to think it's a 'worth it' endeavour I have to replace everything - so unless you're ready to dive in or not have a lot of current 'setup' to eschew you'll be fine (I know a ton of people who only have the one charger for their device, so for them it might be fine).

Anyways, that's my thought on them.  Great cord, but for me, it's having to change my 'ecosystem' of charging and without shelling out huge to replace EVERYTHING it isn't for me.

How about you?
accessories anchor cable Review USB USB-C