An afternoon with the new LG G7 ThinQ

Posted by Ryan Moore on May 02, 2018
So, this isn't a review, these are my thoughts after having about an hour and a half handling the device at a sneak peek event in Toronto.  I found it somewhat ironic that they invited a Thunder Bay boy down to Toronto and then hosted their even in the "Northern Ontario Building" (they don't even know what 'northern' means, heh). 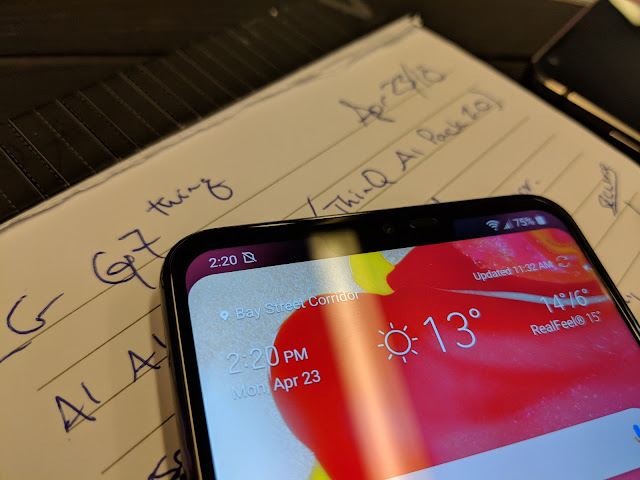 Okay, so let's dive in.  Note that it might seem like a lot of writing, but it's not a complete review, so bear that in mind. 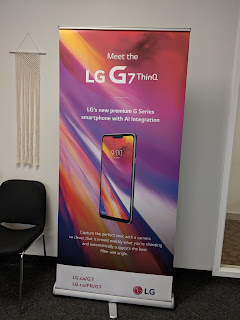 It's here, we can finally touch and play with the new LG G7 (again, I'm going to omit the ThinQ portion... that's just annoying)

At the event, we were presented with a device already set up, and we were not permitted to put in our own info on it so that we could take photos and share them anything before being allowed.  So, photos on this were taken with either the Pixel 2 XL or the LG G6.  I'm hoping to get a device for longer-term use and give you a full review later one.

The device sitting in front of me is just like you'd probably seen in all those leaks and reveals.  It's about the same size as the G6, not a lot different just looking at the cold slab.

We then had a presentation by the LG team about some of the innovation that went into the device and I'll cover those points as I do my walkthrough of it.

After the presentation, we were free to walk around the room which has a few stations set up to really showcase the feature they wanted you to talk about.

Okay, the first thing to mention here is that, and they said it multiple times in the presentation, AI.  AI plays a real prominent role in the G7.  They discussed how some of the automation features they unveiled way back in the G2 actually 'freaked people out' and dialled it back from that waiting for the right time.  With the advent of Google Now and then Assistant, they really dove back in.

A big portion of using machine learning / AI was the idea of privacy.  They mentioned that they had continuously surveyed their users for features they wanted (hence the loss of IR in previous models) - and a big concern (especially lately) has been around privacy.  They wanted us to make sure we noted that the AI features we were playing with were independent of the internet.  The devices were initially no SIM and no WiFi.  Cool.

Also, I noticed they talked about it being ThinQ AI Pack 2.0.  Meaning they've been playing with it on the V30's variant and well, hopefully, updates to the device may be hardware independent.  That software patches and updates can continue to make this an ever-improving device.

But first, let's talk about the device casing. 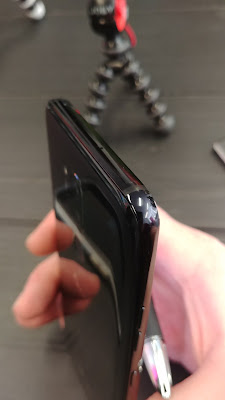 Walk your hands around the device and it is eerily reminiscent of the G6.  Just slightly taller.  Still has the headphone, nice round edges.  The backing feels more like plastic than the G6 (apparently it's a painted Magnesium-Aluminum alloy to not feel as heavy).

One note was that the fingerprint sensor on the back is no longer a button.  It's just a sensor.  Tap it to unlock the device.  There is no gesture features with it currently.  So to turn off the screen you actually have to hit a power button 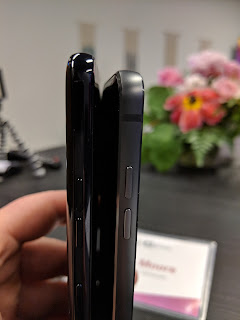 Oh, yeah, it has a power button on the right-hand side if you want to use that.  And you'll need it to turn off, or you can double tap the 'status bar' at the top.

On the left-hand side we have the volume buttons, but then also a new button.  This is the 'Assistant' button.  It's made to load up Google Assistant.

They claimed it was the first of its kind for a phone to have a dedicated Google Assistant button (because Samsung has Bixby ... and not sure if you call 'squeezing' a 'button').

The device is still IP68 rated, with MIL-STD810G protection (meaning it's durable) and will still have Qi and PMA wireless charging.

Another feature of the casing they wanted us to know was that they had designed the chassis to acoustically augment the sound it produces.  Similar to how Bose does that with their speakers.  They call it "BOOMBOX" and can produce 9dB (I'm used to hearing it expressed in Watts tho').

Let's turn it on.

How about that screen?

It looks amazing.  It was cranked all the way up to the max, mind you.  And then they showed off this feature that you can crank it even further (to 11?). 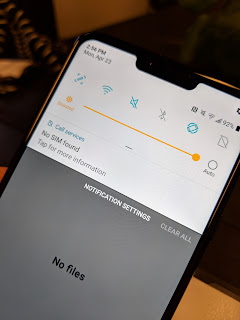 If you bring down the notification shade and see the brightness slider, if you tap the little sun icon, it'll light up and go into a BOOSTED mode where it can deliver 1000 nits.  Other phones run about 600 at their brightest.

A point they wanted to bring up here was that their panel still is an IPS LCD, but they are now using a super bright WHITE+RGB display.  Meaning having white within the LCD helps ensure it's got some real punch to it.

Similar to the G6 the display is capable of HDR10. 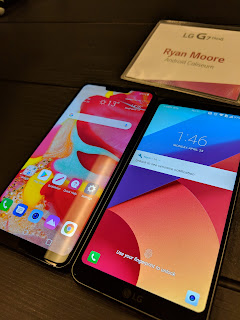 Now, what some will probably ridicule this phone over is the implementation of a notch.  Sure, it allows them to now say the viewable screen is larger (6.1" vs last year's 5.7") and I was wary when I first got a hold.

But it's something that you stop noticing after a while.

Really, what it does is push up the system icons/notifications up higher so they're not obstructing the view.

And then you can customize it somewhat. 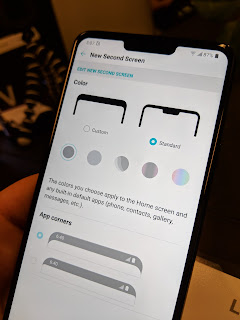 You can have the "second screen" look like every other part of the display with colours, or you can make it just all black so it's 'invisible', or you can give it an accent colour.


That was kinda cool.  Personally, with less than 90 minutes with it, I thought I'd like to 'hide' it, but I preferred to not hide it.

Okay, the feature they really wanted to hype up was the camera.  The camera is suped up to 16MP this year, but the main update here is the AI component.

Turn the camera on and there's a little button that lets you put it into AI CAM mode.

The AI mode then scans the scene and tries to recognize what it's seeing.  You'll see little texts appear on the screen (which aren't at all as intrusive as you might imagine) and based on what it finds it tries to adjust the exposure settings accordingly.

They had a cutout of a dog on a green fake grass, and the phone picked up the little pupper as 'dog', 'animal' and 'pet' etc...

Aside form just taking a good picture, the AI then tags the photo with some of what it thinks the image is of. 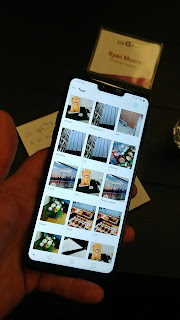 When you go into the gallery of the phone, you can look at you AI shots under the labels it applied to the shot.  The same photo may appear in multiple tags.

The tags are a set list from the ThinQ AI Pack.  I can't remember the number of tags, but they said thousands...

What wasn't clear was if you could manually remove an item from a tag.  If it thought my dog was a cat or something.

They mentioned that more tags might be possible down the road, so looking at adding specifics like Instrument to having Guitar etc...

A very cool feature, as it's something I love showing off in Google Photos.  So they'll have an option too.

So how does it compare.  It was hard to give real side by side comparison of a photo of what it can do compared to last year's, or without the AI features attached.  So bear with these simplistic chances to do it.

Because I couldn't take the photos with me, I tried to take a picture of it's picture... so ... it is what it is until I can get you real shots. 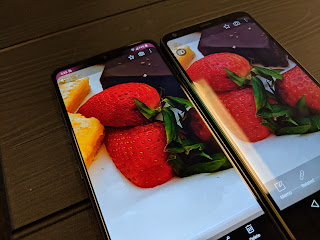 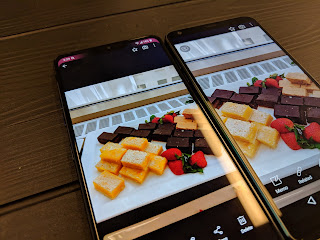 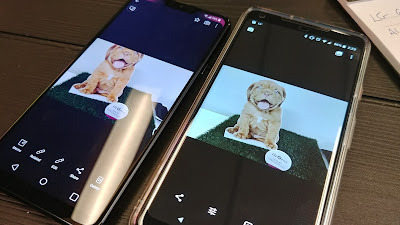 Overall, I'm excited to really play with this device.  The Pixel 2 really was able to keep the G6 out of my hands, even after trying to go back.  Will the G7 throw down the P2XL?

He said that the V is their opportunity to 'play around', get creative and try something new.  Something for the 'early adopters'.  If it sticks, then it goes into the next G.  Interesting answer.

They didn't talk price, because they said that it's really up to the carriers, so we can't speculate at what it will go for.  We'll have to wait until closer to the June 1st launch.

Okay, so that's about all I had for my first impressions.  There's more, like the Audio features etc... but I'll save that for the full review.

If you had any questions, just let me know and I'll do my best to answer.
G7 G7ThinQ initial impression LG Review sneak peek