Review of the Samsung Galaxy A8

Posted by Ryan Moore on April 23, 2018
There's no doubt that often when someone thinks of Android, they're probably really thinking "Samsung".  Just talking to friends who work for the feds and they're excited because they can finally ditch Blackberry and get 'that other kind... Samsungs'.

Samsung does make some amazing devices and they're very well known.  And lately, they've come into the prestige so they can start charging the prestigious prices.  The S9 is over $1000 to purchase.  Not a lot of people can pay that amount - so there's an option.

Want to have 'one of those Samsungs' and not pay a lot?  Here you go, the Samsung Galaxy A8. 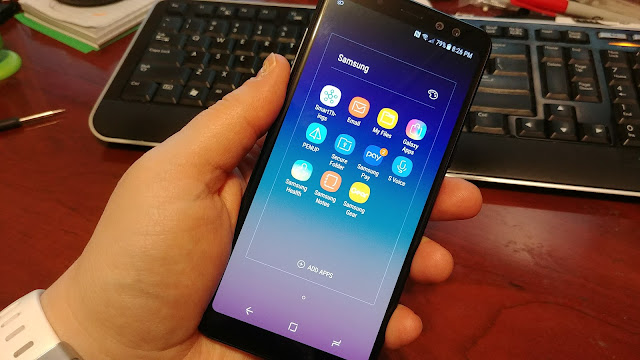 For what you're paying it's a great phone, sure, not all the super bells and whistles of the top end S series, but for a large majority of the population, they'd never even notice.


Comparing it to the S9 the big differences are going to be:
- Display: slightly smaller and not QuadHD.
- Storage: half the storage
- Camera: well there's a lot going on here that's different
- Battery: no Qi charging option

So, for the most part, those are features that most people are not going to notice.  Cameras... well maybe you'd see the difference, but if you're picky (like me).  The processor is hard to compare the Exynos to the Snapdragon, but again, for most people, it'd be hard to really differentiate.

Let's walk around the device a little.

It's a solid hand feel that feels just about the right size.  For me, it's a little on the smaller size.  The back feels like plastic, but the edges feel like aluminium and it has a nice heft to it to feel solid.

There's still the headphone jack at the bottom.  And that's where you notice something different. 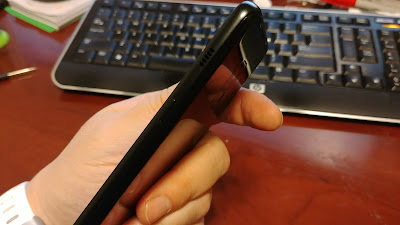 The speaker is now located on the right-hand side.  It's ... just awkward to be up there.  I can't explain why.  I guess it doesn't really matter WHERE it's put.  In fact, when playing games in landscape mode I'm not covering it at all.

Walking around the phone you also notice that there's no Bixby button like on the S8 or 9.  Which is good.  Weird to have a button.

And then like the S9, the fingerprint sensor is in a way better position than the S8 had it.  Definitely way easier to find.

Note, that although the fingerprint sensor works just fine when operating (love how you can set gestures for it to bring down the notification shade), but setting it up took seemingly way longer than it should have.  Plenty of mis-hits and having to move it slightly.  It was really frustrating. 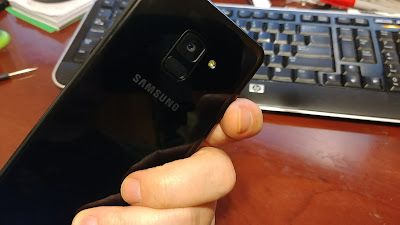 But it paid off in the end.

So, that's the outside of the phone, let's turn it on and see the 'inside' of it. 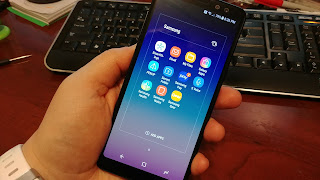 First things first tho'... after getting into the phone, go into the settings and flip that navigation button layout.

Seriously... is Samsung the only one that puts the multi button on the left and back on the right?

You can also have the navigation bar hide by tapping that little dot there, so it'll only show up if you swipe from the bottom.  Tap it again when you see it in order to keep it there.

They also have some third-party apps like Amazon and Microsoft (which is funny that every Samsung device I've reviewed it always shows that folder in Spanish ... don't know why that is).

The app tray is accessed by swiping up from the bottom and is totally customizable on how you want it ... folders, order etc...

And that's about it.

One thing I did notice that going through the Samsung apps and all is that Telus put in one of their own apps which was pretty cool actually.  It's just a phone 'tester' where it checks the health and status of a few things.

I would have loved to have something like that back when I was fixing phones.

Overall, many of the features on the device we've seen before.

My favourite is the Game feature.  I love it and I kinda don't.  Enable it and it allows you to have features like record etc... while you play recognized 'games'.  But doing so also throws all your games into a 'games launcher' folder.  It's a folder, but it looks like an icon on the homescreen and in the app drawer.  So it's very easy to forget that all my games are in there.  "Hey, where's Hitman... I can't find it... it ... oh, it's in this launcher thingie."

I do have to laugh that part of the launcher is it getting to recommend other games... and there are now 2 icons recommending PUBG for me.  Okay, I get the hint...

Let's jump on to probably the favourite feature.  The camera.

Again, no big surprises here for anyone who's familiar with the Samsung camera features.  Fairly large and easy to use.  Just point an shoot (they do have some more manual controls if you like).

And the results are really good. 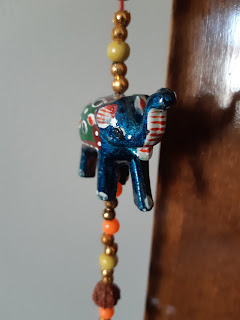 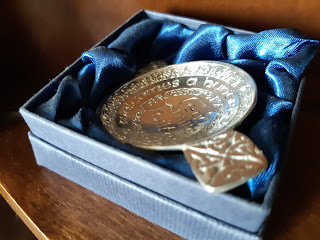 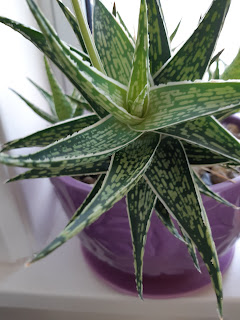 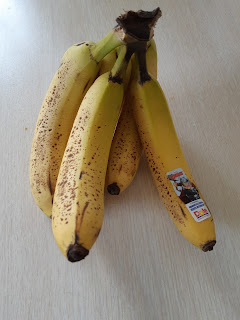 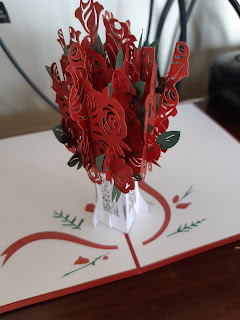 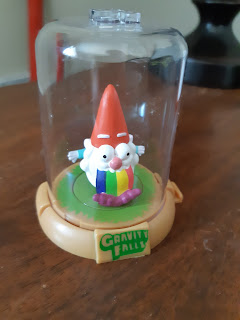 I've seen better, but I've definitely seen worse.  For the 'better', that's something probably only a handful of people would be able to definitively say 'better'.  For most people it's more than adequate.

Bixby with the camera, called Bixby Vision, is there as well... and I don't recall there being the 'nearby/AR' option before.

Tap the little map market button with AR on the camera main option and you're shown a little 'radar' screen and when you rotate the phone it starts to show where places of interest are in relation to where you are.  Pretty neat!

Overall, I was impressed with the little device.

For what I've been using it for, it's quite snappy.  It would take some real push for me to notice some lag.  It's not screaming fast, but I wasn't at all upset with how it handled.  Good RAM goes a long way.

The battery was also very good.  I didn't have it for data usage or anything like that, but an hour or so of screen on time it drained only about 20%, which is pretty good.

All in all, for the $650 it's a good price point for the value.  Definitely for that user who knows 'Samsung' but doesn't need to pay for the top end everything.  Sure, for less you can get some decent phones as well, but you can't go wrong here.
galaxy a8 Phones Review samsung video