Posted by Ryan Moore on March 12, 2018
So lately I had been reviewing some cases.  One of them was from Peel, an extremely thin case, that looked nice, but like the other cases I'd reviewed my concern was 'what if I put my phone upside down?'.  Not that I do it a lot, but with the right case I can do it and not worry.

Slim cases mean there's no lip to cover the glass.  So, let's protect the glass.

I can't tell you how important that is to me.  As it is, I baby the crap out of my phones and obsess over the tiniest of abrasions.  On my Pixel 2 XL there's already a couple of small little nicks.  And they glare at me every time I look at the phone.  I tried to take a photo of them, but even with some lens adapters to get macro, I couldn't get them to really show up in a photo... should tell me that it's fine.  But I still want to protect it.

Well, Peel makes a glass screen protector too!  $37CDN ... a little on the pricey side, but if you're a perfectionist like me you'll want to protect that pristine glass. 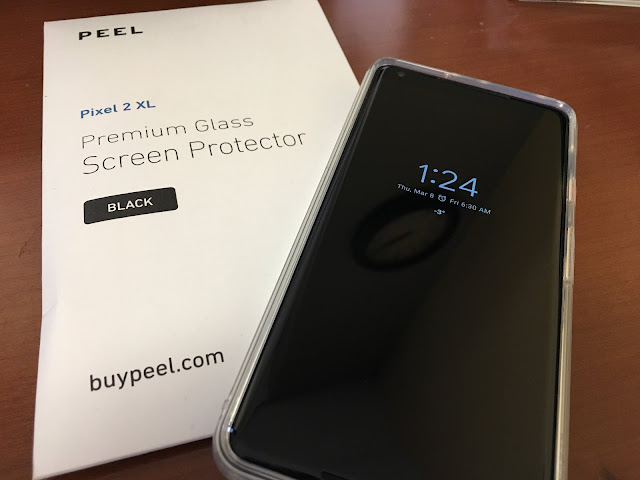 I've got to say, I've never been a fan of glass over glass, I don't know why... well, there was this really poor quality one way back when that kinda soured me on the whole deal.

But, the alternative is those thin plastic things, which is just an OCD nightmare.  This is where glass is a lot easier on your mind.  Sure, it's more expensive, but you don't have to worry about buying a pack of 5 of them for when an inevitable dust bit gets in there or a corner snags and you have to toss it out and reapply.

The package to install is simple. 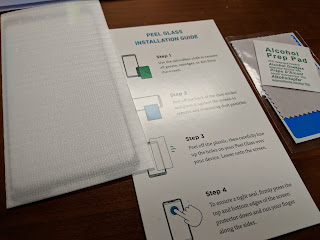 Just clean the screen as much as possible.  Get all those little flecks off of it. 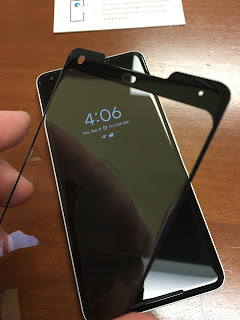 Peel off the backing of the glass and then apply.  Line up the notch/cutouts with the speaker grills (it's really easy with this phone actually) 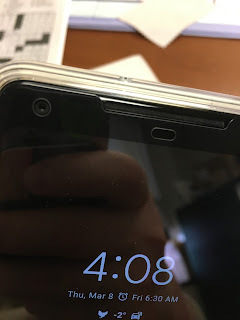 And you're good to go.  The device has the adhesive around the edges of the glass, so you don't have to worry about pushing out airbubbles.

The rigidity of the glass makes the application super easy, no flimsy plastic flapping around.

And it works just fine.  No 'weak points' in the glass where your finger doesn't pass through.  You can make out the faint 'dots', which I'm not sure why you always see them in glass protectors.

Best of all the edge has the black display that really makes it invisible against the bezel of the device.  Looks sleek.

And again, this is just me being picky of course.

First up, there's a big 'greying' look when you look at the display from an extreme angle when off.  A totally stupid thing for me to point out, but it's what I notice.

It's hard to capture on film, but you can see on their website ...


It just reminds me of like my first few Android devices that had that bit of a glass gap.  I'm sure it's nothing 'bad', it's got to be something about the index of refraction and the fact there's a thin air space between the two...  It's just there.

The next is something to deal with that.  Not sure what is causing this, but it looks like there's a bit of an 'oil blob' in the middle of the glass.  It reminds me of a 'fractal' look. 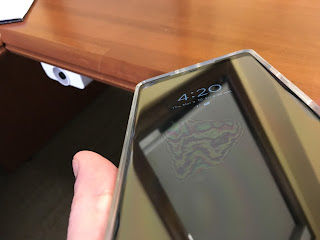 Again, hard to really see except in the right angle, but it's there.  Not sure how it happened, and I'm afraid to try to lift up the protector and maybe see about re-cleaning everything (would the glass break?).  I've waited a few days and it's still there, if slightly grown.  I was hoping that it might fade out over time, but not yet.  I'll probably own this as an installation error.

The last is the least little concerning thing.  With the Peel slim case and this protector, I feel secure now.  Except there's a bit of a gap now between the lip of the case and the lip of the protector.  So just find myself constantly running a micro fibre in there to clean out any dust.

I have to emphasize that in NO WAY do these tiny little things affect the way the screen operates or looks.  It looks and is still usable 100%

So, a few little niggling points.  That being said, would I not recommend it ... absolutely not.  Worth it to protect my glass.  Everything I can live with and it's just minor cosmetic / vanity issues.  Still better than getting one of those ungodly sized cases with flimsy films.