Google Homes can connect to your favourite BT speaker

Posted by Ryan Moore on March 30, 2018
Well, chalk this one up in the "I thought it already could do this" column.  Way back when I got my Google Home Mini I went through the settings, and I swore I saw that feature about what would be the default speaker ... I could have sworn that I saw there was a Bluetooth option for its default speaker.

Maybe it's a new update, but a couple days ago I saw the folks talking about it being a new feature so I had to try it out. 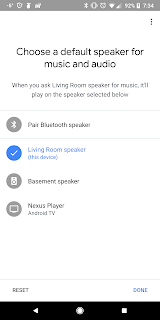 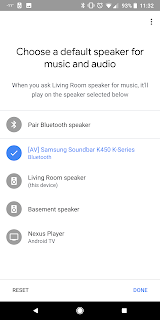 To set up you go into the Google Home app and pick you Home speaker and then in the settings there you'll see the option to choose the default speaker.  You'll see an option to pick one of your devices or pair a new Bluetooth speaker.

So, I set my Soundbar into BT mode and had it pair to the speaker.  Pretty simple.

Now, when I ask Google questions it'll answer on its own speaker.  When I ask it to play some Simon Fraser University Pipe Band or CBC Radio (who doesn't love Under the Influence) it'll play over my soundbar.

... my soundbar is also my HDMI switcher for my TV.  Even when the mini isn't playing something it's having the soundbar switch to BT, so if I was trying to watch my Roku it switches back to BT and thus the video doesn't flow through the bar ... so it was kinda annoying.

I'll have to find a separate BT speaker that can be dedicated to the mini.  But, which...

...apparently it's around 10W so any of the speakers I have to use will have to be better than that.