Google Home Mini - helping us all in the house 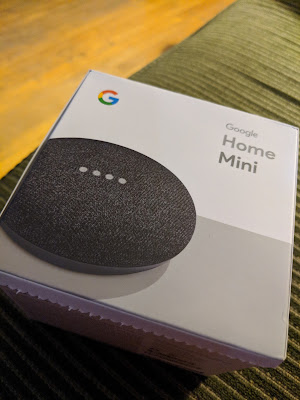 So, if you've been following CES lately all the talk lately has been about AI and assistants.  So many assistants.

Well, before Christmas I decided to get a couple Google Home Minis like most others out there it seems.

The sale of half off definitely helped in my decision.  Regularly it's $79CDN.

I had bought 2 but couldn't wait until Christmas to open it, so we played with one of them.

My son was happy to play and talk with Assistant.  He even enjoyed the trivia game.

The second I wanted to put in the kitchen but we have a smaller space so another cord wasn't going to work.  Plus, the sensitivity on these things are pretty killer, it would have heard us on both.  So, downstairs it goes.

Immediately, using the Home Mini has some novel uses.  We like asking it to tell us jokes, we like seeing what Quidditch role we'd play, or my son asking it about Siri (if you think I'm an Android nut with apple hating tendencies [I'm not against Apple], my son really really is).


But to get it working just right we have to set it up.  And as simple as turning it on and running, to get the most out of it we should play with what settings we have.


So, let's talk about the actual setup. 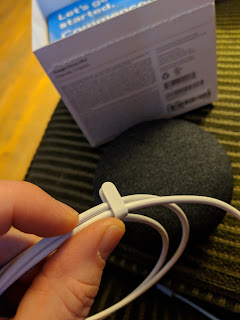 The device has the speaker and a cable to plug in, it really just uses microUSB, so I guess you could use any microUSB cable you have laying around; but it does come with a fairly long cable.  Personally, I'd love to order one of these wall plug mounts, but they don't ship to Canada.  Plugging it in, it takes a little bit to boot up. 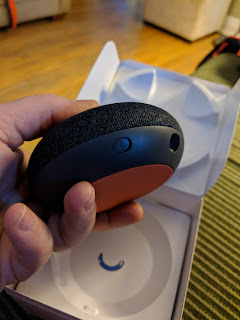 In terms of physical buttons, there's a reset and a microphone off switch if you have your tinfoil hat on.

There are some 'controls' with it, but you can't really see them.  There was a button on top, but it was disabled.  But you do get the side controls. 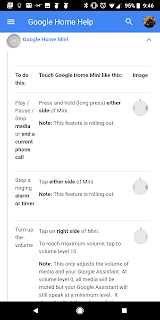 Essentially, the left side lets you turn the volume down, the right side turns the volume up.

Then, in order to get it all running, you need a device with the Google Home app.  Once you load it up you add a new device.  And away we go.

Where it gets awesome is to be able to set up voice matching.  See, just setting it up you can ask the Assistant questions, but it doesn't know who you are so it can't personalize.  It knows that it's in a specific location, but that's about it.

But if in the app I set up voice matching for my account, then it'll know from then on when it hears my voice to answer appropriately for my account settings.  We set up my wife and my son too.

Once the original novelty wore off, what else can we do?


We had done the reminders, the timers, little silly games, jokes ... but for us, what could we use it for.  My wife found that if you asked it to play CBC Radio, it actually turned on TuneIn to CBC Radio Thunder Bay.  That was awesome.

Once we set up in the app the rooms and 'zones' with names etc... we could do the 'broadcasting'.  Meaning I could be at the office and ask Google to 'broadcast I'll be home soon, anything needed?' and it would broadcast what I said on both speakers.  Or, if I was upstairs and did the same thing, the upstairs speaker would broadcast to the downstairs one (or v.v.).  Now this is getting handy.  My wife's always wanted an intercom.

It was then that I had seen the website that Google had put out about commands that it can do:  https://assistant.google.com/explore?hl=en-GB

Now, we can really look through all the options and good things.  We should get more used to these commands as Google has promised Assistant to more screens in the future.

Until then, asking it about cat jokes is still pretty fun.  (my favourite has been when my son burped, and I said "what do you say?" and we asked Google and it responded "Sorry, I'm not sure how to help with that yet", which is what he now says every time he burps)
Google Home Mini Review video