Posted by Ryan Moore on November 28, 2017
So, when you're still in the business sector in Canada you still see a lot of BlackBerry devices out there.  Plenty of the... well, let's admit it, greyer haired folks handling something with a keyboard (heck, maybe even a trackball still).

But, eventually, they're going to have to get off that older device and onto a 'real device'.  So, why not a device that they might be more comfortable with, something they can at least recognize the brand name of ... BlackBerry.

Now, there's the KEYone, something with the keyboard if you must have it, but really, if you're upgrading why not just get into a proper smartphone with a full screen, no keyboard.  It's the mature thing to do (hahahah, sorry Rob). 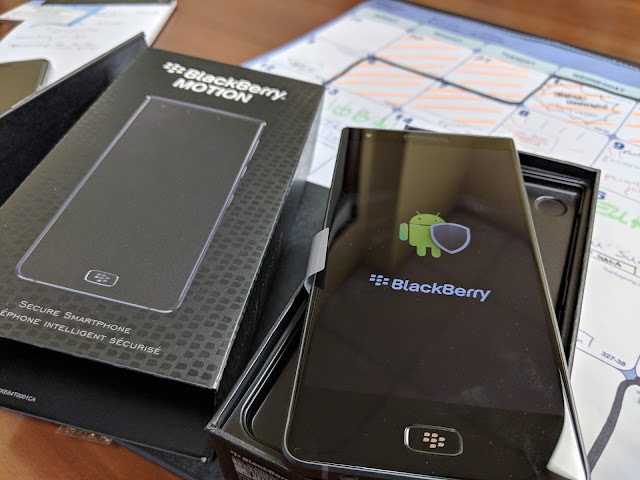 With wanting some brand that's familiar and no keyboard, well that's the Motion.  And to boot, it's got IP67 protection; the first of its kind from BlackBerry (and great for this time of year).  Let's dive in and see what it's about.

First up, before I start anything, let me just start off by saying that much of what I saw in the Motion, I also saw in the KEYone, so for the discussion on software, go check out that article:  http://www.androidcoliseum.com/2017/06/review-blackberry-keyone-for-those-that.html

On to the review!


First up, let's talk about the specs:


So, I'm liking first up the fact that it's got a 4000mAh battery and the SD625 is not power hungry so it'll last a good amount of time.  But more on that later.

It's not got the top end specs, but for the market that's eyeing this up, they don't need a screaming fast Lamborghini.

Besides, $600 outright is a darned decent price for what you're getting.

Let's talk about the build quality.  It's very iPhone 5'esque with the square'ish edges, a little chamfering, but feels really solid.  The top is rounded over front to back to just break with the monotony. 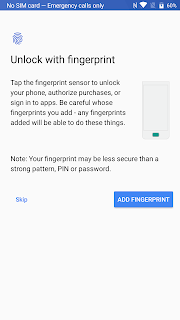 But it's also an actual button, similar to the old Galaxy devices where it acts as the home button.

Coolest of all it's got swipeable gestures.  Similar to the Pixel line, if you swipe downwards it'll lower the notification shade.  Very cool. 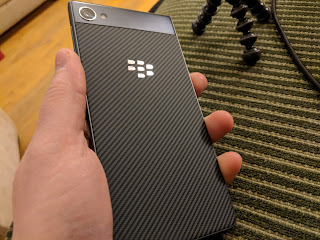 The big detail here is the back its got the nice textured, diagonal 'ribbing' reminiscent of BlackBerry devices.

On the side with the buttons is the volume rocker and a power button.  To me, they are a little high for my taste.

The opposite side of the grip is the nanoSIM and microSD tray. 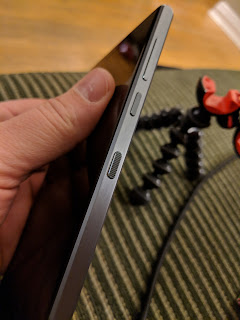 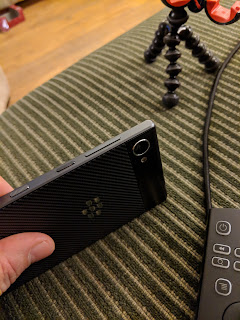 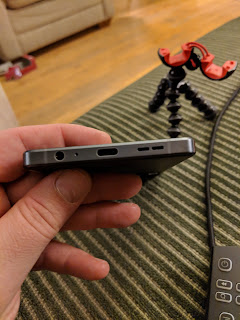 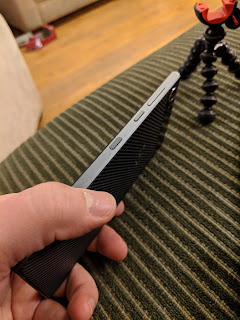 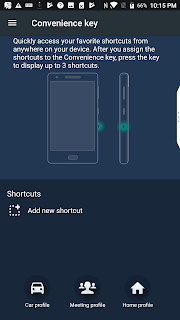 Back to the other side again there's also the convenience key ... you can set it to do ... something.  Whatever you want.  It's got some lines on it so you know where it is.  But for me it's in the exact spot I might expect the power button to be.

So I keep hitting it by accident.


But, you can set it to just about anything tho'.  So that's a bonus.

While we're on this, let's talk about the software.  Again, most of the software we've already seen in the KEYone, so check out that article for a lot of that discussion, I'm just going to talk about some of the newer options that it didn't have.

First up, I'm not sure if the KEYone had this or not, I don't remember, but being able to double tap the screen to wake it up, or double tap the homescreen to turn off is very welcome. 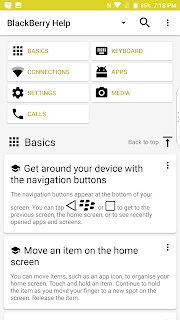 The other I don't remember the KEYone having was the 'BlackBerry Help' app.  This is something that maybe neither you or I would need, but for that client who this might be targeted at where it's maybe their first real smartphone device.

Providing help is going to be critical, and this app does make it look very simplistic so that it's super easy to use and comprehend.

Everything else is similar to the BlackBerry features. 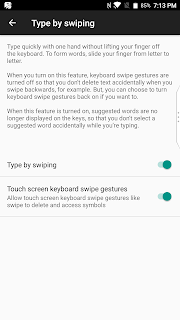 The slide out edge, the DTEK security check-up, the cool way to flip upwards on icons to bring up a widget window.  Oh, and the hub and other BlackBerry software like BBM, and their keyboard (personally, I hate the keyboard, even to just turn on the swiping feature took a while to find ... and they do that obviously because they like their own autocomplete feature where you swipe up). 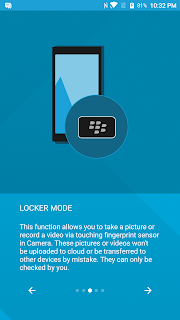 The coolest feature that it brings in is this new 'locker' feature.

Where I first ran up against it was in the camera.

So, taking a picture this way 'secures' the image.  It takes it but it's going to be hidden and can only see it if you enter your lock code or your fingerprint.  So, if you have something rather ... errmm... sensitive you want to take a picture of.  Let's say legal documents, use this method.  Photos taken this way won't show up in the Photos gallery at all.  The only way to see the photo or even to show it's 'hidden' is by going into the gallery from the camera itself. 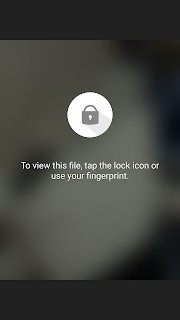 You'll see the photo heavily blurred out and asking you to give the security.

Alternatively, you can get to it through the new Locker app.

Start it up by providing your security to get in and you can have a whole bunch of files and what not in there.

Okay, the final thing to talk about here is the camera.

And this is something many of the BlackBerry devices have always fallen short of.

Nothing super amazing here, no wow'ing features to talk about (aside from that cool locker feature).

Photos are okay.  See below for some examples.  Nothing to write home about, but far from some of the better shots I've seen out there.

Overall, this is a decent phone.  Solid build, sturdy performance.  Not a lot of lag noticed.  It's not blazing along, but it's not chugging along slowly either.  I threw some games at it and some web browsing, some videos and things were okay.

Best of the performance bit is the fact that it has a huge battery and just keeps on trucking.  No issues here about it lasting a long day's worth of work and not needing a top up.  Even if it did, the fact it's got QuickCharge 3.0 it won't take long to give you the energy you need.

And it's only $600.  No flagship phone pricing here, and for the majority of people (especially taking  into consideration who I think the target market is) there wouldn't be a noticeable performance difference.  I'll notice it.  But will you? 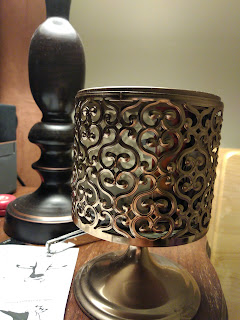 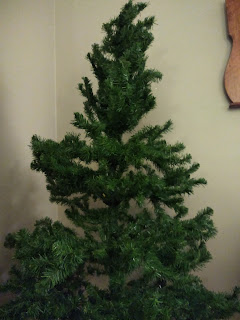 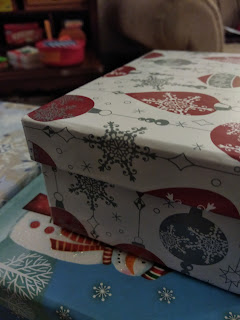 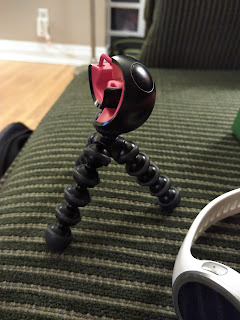 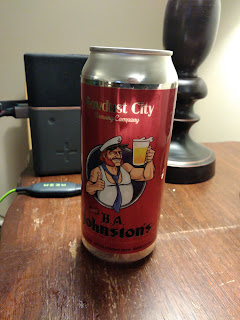 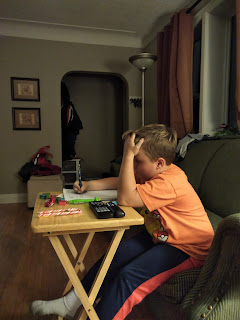