Posted by Ryan Moore on October 12, 2017
So, here I am at a conference at a table and I hate pulling out the laptop, so it's my phones and tablet to do any notes etc... all those devices will need a top up at some point.

And not just m, I'm looking around and the 6 of us at the table are all doing the same thing.  A phone or 2 on the table, any outlet close has a plug and a device plugged in just sitting below.

Well, Tylt to the rescue here. 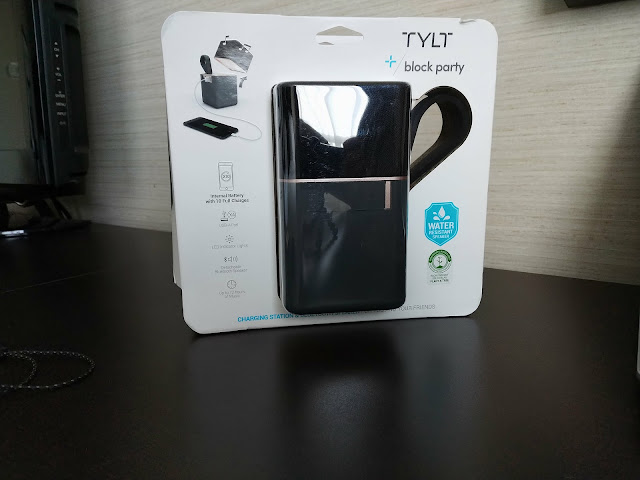 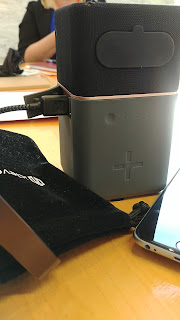 I can put this device in the centre of the table and most of us can plug in our devices and not leave them dangling below a wall plug or on the floor like a homeless device.

The new Tylt Block Party is a massive block of battery with 4 outputs to charge devices and then has a detachable speaker as a bonus.  Currently, it's available for pre-order on the Tylt site for an early option of $99USD


If you're familiar with Tylt, you'll know they do well with taking something making sure it's functional and making it somewhat aesthetic... not chic, but it's not ugly; but there's no doubt that it is what it is.  This block has their familiar vinyl/rubbery texture surrounding it, with flaps to cover 2x USB ports on opposite sides (at 2.0A each).

It also has a big strap for you to carry it around, and that's nice.  It is heavy tho', and so it'll hang a little awkwardly due to the angle of the strap.  At that angle you do have to watch to ensure the top speaker doesn't fall off.  Eep... it happened to me.  Grabbing it I think I might have picked it up too fast and the magnet holding the speaker on gave way to gravity.  It's a strong hold... but things can happen.

As such I have a 2 small marrings on my speaker now.  A little rip on the speaker cloth and a chip in the painting of the connector.  Sigh... sometimes I wonder why I'm allowed to have nice things if I just mar them.  It's the only thing I'll see on it now.

Outside of that it's a very cool device.  I'll let you watch my review video below:


As you can see, my main issue is how it charges.  It uses a standard AC cord which is fine, it'll charge in about 2 hours.  Using a USB cable would take a lot longer.  You may think that 2 hours is a long time, but it's 20,000mAh to fill up.  That's more than 6 of my LG G6 devices... to charge that up that many times would take a while to do.  It just means having to carry another cable around if I want to top it up.

The speaker is a 5W thumper and can be detached from the top and has its own 1050mAh battery (it's not clear if that is included in the 20,000mAh total or on top of it).  That should give it about 6-8 hours of play time.  Connect it to the stump for battery power and it'll last 72 hours.

It connects by either bluetooth or 1/8" line in.  Controls are play/pause on a flap and then on top there's a +/- which acts as volume (or skip/prev if you long press).

Quality of sound is quite good.  It filled our little conference room no problem.  At top end it was a little too noisy for the enclosed space.  I can imagine in your backyard or balcony you'll be pleased with how well it would perform.

Now... $100USD could be thought of as high.  But look around at similar speakers or batteries separately and you'll be probably coming to the same price.  Except this is as one device.  For that purpose, it's a good deal.

I'll be bringing this camping with me for sure.  Being able to charge my device 6x over a weekend camping trip I won't have the need for the extra cable.