Posted by Ryan Moore on August 29, 2017
I love camping, I love getting outdoors and unplugging... the right trip can just be so 'tranquil'.

As much as I said I like unplugging, a lot of my books are on my device (my son and I are reading the Harry Potter series, and it's on his phone), our camera is a phone.  Heck, I even have a USB powered fan and LED lights to help make the tent a little more bearable.

Going out for a day may be alright, but any more and I'm going to need something to power those devices.  Using the charger for my car could cause a bit of a drain on my battery (my CLA power stays on even after the car is off, very handy), so I don't want to leave the site and find my battery has died (although, I do have a car starter battery just in case).  I have in the past years brought my multiple battery packs.  I have several.

Or, I could just bring this one from dodocool, not only is it 10,000mAh; it also is rechargeable by the sun.  Something that (hopefully) is in abundant supply 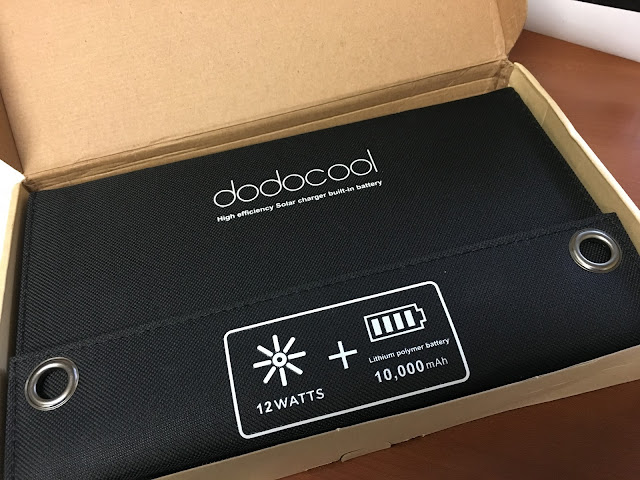 It's great that not only do I have a great amount of banked energy for use, but I also recharging itself via the sun.  No using the battery of your car to recharge, or having to crank it up.  Just place the solar panel (which is about slightly larger than an 8" tablet) somewhere in the sun for some hours.  And it'll charge 2 devices at once. 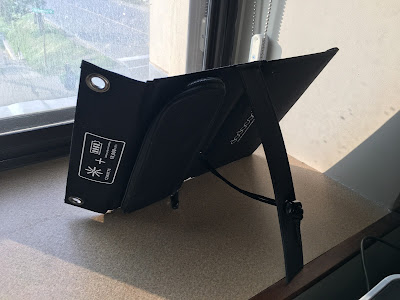 Now, it claims that at 12W of solar energy, with 22% efficiency it can charge 2 devices (~2.4A output) and still charge the battery (it will charge devices over charging the battery). I find that hard to believe, as I put it in the window sill of my office (which faces East) and after a full day (sure, we're starting to lose some sunlight power and by about 2 the sun is not really directly facing that window) it had gone up only about 25%.  Maybe in the strong sun during the height of summer (up in the North our angle isn't as strong elsewhere) it might charge faster.

I like how the lay out of it has a built in little stand.  Flimsy, but does the job. 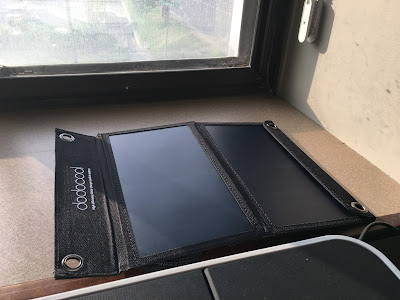 angled is better than laying flat, depending on where you are

I drained it one day, put it in the dash of my car while parked and after 8 hours it was a little more than half full. 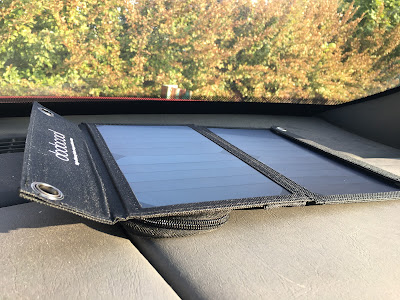 Still... getting free energy is still better than nothing. 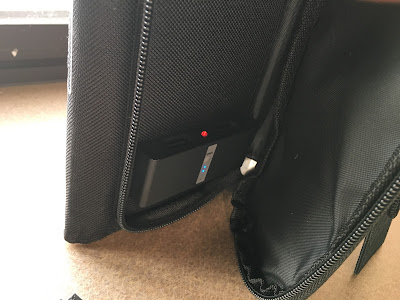 To help you gauge how much power it has there are 4 LEDs, which makes guessing easier than those 3 LED colour guesses.

You'll find it (with the USB ports in a little zipper pouch on the back - they show you can put your phone in there, but I don't want a cord scratching my phone so I wouldn't put it in there myself).

The device is very portable, folds up very neat and has magnets to keep it shut.  There are grommets on it so that you could clip it to a tent or tree, backpack, etc... which is very handy.

Overall, for a $43CDN investment, it really is helpful for camping.  A couple devices with moderate use and a good sunny day is easily handled by this.  So save bringing a bunch of different and bulky chargers (I ended up bringing an equivalent of like 20,000mAh with several banks, and I had friends bringing a huge 30,000mAh pack) with just this one.  The fact that it'll recharge itself will make up for the large need you may have on a camping trip.