Posted by Ryan Moore on July 17, 2017
I love me my mods. And you need the right mod attached to the Moto Z as it's just a little too skinny to be on its own.

So what do you want to have on it at all times?  A nice style shell to make it look cool?  C'mon, you guys know me, I could really care less about how things look.

For me it's about function.  Having something that does something else will be helpful to me is important.  The speaker?  It has it's perks, but not something I need connected all the time.  What I do like is to ensure I have enough battery.

Most dadys, the regular battery of the Moto Z or even this new Moto Z2 Play is enough for me.  But it's always nice to have more.  In my messenger bag I usually have my 8000mAh and my 5000mAh battery, but then it starts getting bulky.

Last season there was the Incipio Moto mod, and it was good.  This round there's the new Moto TurboPower pack mod. 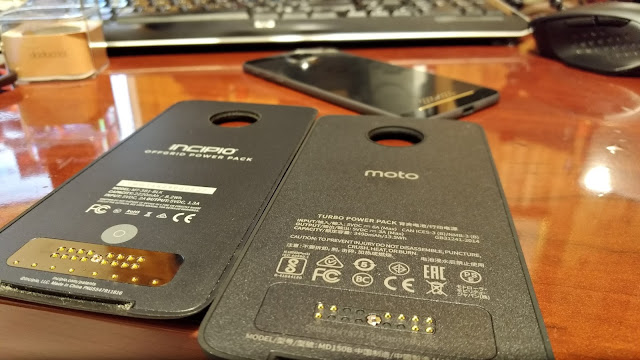 It's listing for about $100CDN, and what does it offer?

So, if you remember from the Incipio, it offered 2200mAh, but only at 1A output, which was fine.

With the new TurboPower pack you get 3490mAh for the same size! 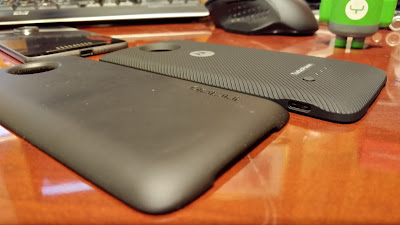 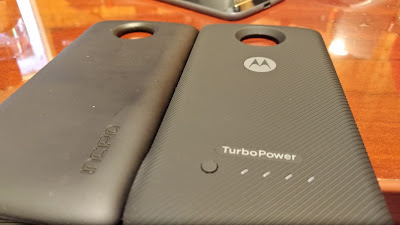 Not only is it more power, it's MOAR POWER!  It will turbo charge at 3A.  You won't notice if you leave the mod in 'efficiency mode' (that's where it lets the phone go down to 80% and then just sips away at the power keeping it there until the pack is gone).  But if you used the phone for the day and plop the pack on it'll charge it up pretty quickly for you.

It even has a nice texture on the back for you to hold it. 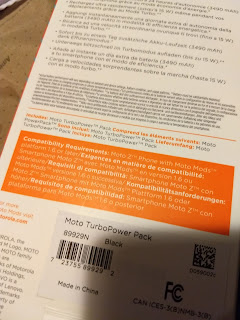 Now the caveat here is that it's compatible with the Moto Z family devices that are running mod platform 1.6 or higher.

For some reason, my Moto Z is running only at 1.5.  All my research says that the Moto Z should have gotten an update in May and put it to 1.6, but I can't seem to find any way to force it. (you'll find that the Moto Z software update page for UK and USA show that it had the update, wherease the Canadian page doesn't show that update) 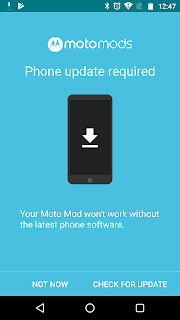 When I connect it to the Moto Z it just says "you need a software update" and that's it.

So if you're on the Moto Z, you're out of luck until an update hits.

If you're on the Moto Z Play or Moto Z2 Play, you're fine.

The other nice thing is that it has a charging port on the side of the battery so that you can charge it when it's not in use, or just charge the battery via USB-C.

With the other model the only way to charge it is to have it on the phone while charging, and once the phone is 100% the pack will charge (unless you're using a turbo charger which can charge both).

Now the glitch here is that this mod port does not like my ICZI cables.  It is very weird.  I've never had a problem with anything else, except this pack.  It's like it's not recognized.  Oh, well.  [update - it starts to work, but takes a few moments for it to recognize and doesn't seem as fast - use basic cables and it's fine\

Still... $100CDN will be very well spent for whoever gets a Moto Z family device and needs extra juice.  With the Moto Z2 Play I was getting easily 2 days with this mod on and still having juice to spare.