Posted by Ryan Moore on May 18, 2017
So, I wasn't a big fan of tablets over the past years.  I don't know why.  I really loved my Galaxy Note 8 back in the day.  Well, there's a new contender to get me to love tablets again, it's the latest Galaxy tablet.  The Tab S3. 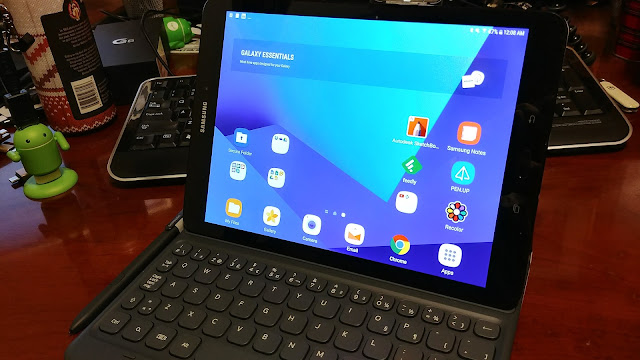 Now, Samsung really makes some great hardware, and you really can't go wrong with them; premium stuff.  It is expensive, so you have to go into it with the willingness to spend some money for something good.  So the device goes for $750 (on sale currently at BestBuy).

What puts this tablet over the others is the S-Pen.  It's amazing!  Oh, and the keyboard (but I'll do that in a separate review).


So, let's take a look at the specs contained within this device


Not super impressive stats there with the exception of the battery.  That's a huge battery, and you better believe it lasts seemingly forever.  I watched a couple hours on Kodi... in 2 hours I only lost 25%.  That would put me about 8 hours of viewing time.  The box says 12, which I could see if I tweaked some of the settings to make it last longer (watched a video on the SD card instead of streaming, adjust brightness, etc...).

When I used the tablet for some work (like I'm doing now, I'm actually writing this review with the tablet and keyboard) in about 2 hours of work I lost only 20%.  Very good for the size of the screen.

Okay, let's get into the hardware.

It's a thin tablet.  Really thin, but it still feels very sturdy.  Which is good.  I'm still not completely sold on the 4:3 ratio, especially when you hold it in portrait mode.  Landscape mode it's not bad (especially when in the keyboard case).

In typical Samsung fashion it has the navigation buttons and the home button that's a fingerprint sensor.  Now, I had a lot of issues with this.  Like, it was literally 1 out of 3, and became faster for me to just punch in the code.  Just starting week 3 with the device and it seems to be picking up better (of course, just as I was recording the video it works fine).

Another piece of hardware, and one of the main attractants to the device is the S-Pen.  This is pretty amazing.  It's odd because unlike other Note devices there's nowhere for the pen to go.  So, they've put a clip on it so you can hang on to it like a regular pen.  But, even still, I wish there was some way to clip it to the device some way.

The pen is amazing.  It has the same floating action 'command centre' we've seen in other Note devices and is absolutely fluid.  It really feels like a real pen being used.  Heft is right, nib sensitivity... it's awesome and it's really hard to use the tablet (without the keyboard) and use the handwriting with the pen instead of tapping keys on the virtual keyboard.  It's really good.

How's the screen?  Well, it's Samsung and they do a great job.  I'm not going to say phenomenal, but really good.  It has the ability to view HDR videos, but so far there's no way to watch them as far as I can tell.  Netflix only recently updated for HDR/Dolby but only supports the LG G6 at the moment.

Now, I wasn't sure if I should include this comment in the software or in the hardware, but one thing I do notice as I use the device, especially when you scroll.  There's a bit of a 'fluid' look to it.  It's like you slide downwards and the one side goes and the farther side of the screen gets pulled along slightly behind, having a bit of an elastic like look.  I only really notice it as I've seen it in other Samsung devices in the past.  Other folks have had a hard time seeing it.

The only real complaint I could come up with is the odd feature that the USB-C port is slightly off centre, which is just... well, my OCD flares up.  I guess that it is sort of balanced by where they put the headphone jack... but I digress. 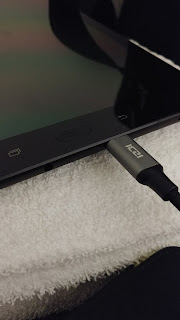 Oh, and I should also talk about the speakers.  Did you hear that there's 4 of them?  In each of the corners and it's pretty loud.  It has a slow ramp up but nearer the top end it gets loud.  Apparently they're Harman Kardon, but we don't have the sticker on the back like the website.  It's really great in landscape to watch videos in real stereo.  Too bad they couldn't reroute when in portrait mode for stereo that way too.

Now, let's talk about the software.  Sure there's the typical Samsung complement of 'bloat', but I'd hardly call it that.  You stuff the items you don't use away, and way less than used to be included with Samsung.  The real culprit comes into the fact that they're including some 3rd party software, like the full Microsoft Office suite (which, because I'm not using it for my work, I'll never use) and then a couple of extra apps like Pen.Up (a drawin app where you can really make use of the pen, but I'm not artistic enough) and Recolor (like those adult colouring books you keep seeing... but I just can't figure out how it works between drawing and 'filling').

My favourite app that they include is the Samsung Notes (remember S Notes back in the day).  A real robust note taking app that lets you scribble, type, paste images, etc... one place for all of your notes while sitting in a meeting.  I used it a fair bit while I was away on a course.  The only downside is that you can't export them outside of Samsung's cloud, except as a finalized PDF or JPG.

As with the past couple Note devices there's also the cool feature of being able to write on the lockscreen when the device is off.  It looks so cool to be writing on a black screen, reminds me of the old blackboard days!

You'll see in the video that I did (above) that we did a project on some development and this tablet came in super handy by allowing me to draw our proposed plans laid over top of Google Maps.  The group was really impressed and allowed my portion of the project to just be that piece.  Suckers!

One of the downfalls of the Samsung apps is that it set their browser as default (I thought they finaly did away with it - but I want Chrome.  Getting it to set Chrome as the default was very hard.  I was only able to do it because I know how to go into Settings / Apps and clear defaults for their browser, allowing me the next time I click a hyperlink in an email to choose which app to open it with.  Was kind of a pain.

I won't say PHENOMENAL, but it's really good.  For me to do browsing, viewing media etc... it more than aptly handles it.  Even when I was doing the project and I was flipping between Google Earth, Google Slides, the note taking app, a browser and Sketchbook, I didn't notice any slow down.

I've already told you about the stellar battery (I've been typing and working on this device for almost 2 hours and down only ~12%).

Overall, this is a great device.  The pen is the true highlight.  The only 2 real hold ups I'd have over this is that the pen has to be kept in a pocket or something ... and the big obstacle to overcome is the price.

I feel bad to say that $750 (on sale) is expensive as it is a great device.  It's worth it, and I've had a few people kinda nod at the price suggesting that they think it's probably accurate, but probably higher than they were willing.  I'll say it's worth it, but it's hard to say it's great bang for the buck.

It's up to you to say that the money is worth it for you.  For me, I don't think I'd use it as heavily as I would like (I can't hook it up for work due to IT policies) so it'd be a hobby device and then it's hard to justify the price... for me.  If you know you're going to have a lot of heavier use, then for sure it'll be a perfect item.

OH, I didn't talk about the camera... but then again, do I need to?  Who's really taking pictures with a tablet?  The front facing is good enough to videoconference... so that's all that really matters. 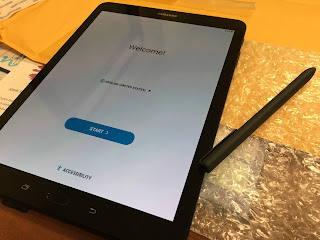 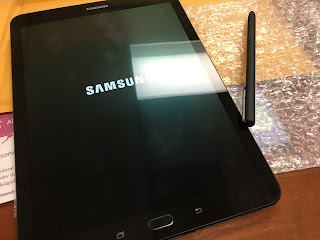