HTC U11 announced - and it's squeezeable

So, today, HTC announced its latest flagship, the HTC U11.  This is the follow-up to the U / U Ultra, and as much as it's just another iteration, it has a bit of a new cool trick up its sleeve.  You can squeeze. 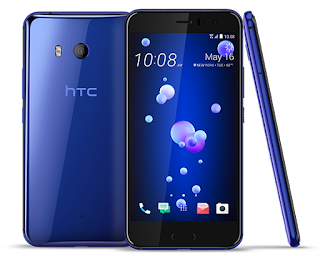 
That's some impressive processor.  The likelihood that Canada will get the 6GB RAM version is pretty minimal, so I'm not holding my breath for that.

On the pre-order page, it's listing it as 4GB with 64GB storage (which should be the absolute minimum these days) for $900.  Pretty pricey, but hey, you're getting their fancy USonic noise cancelling earphones as well as a dust cloth. :)

The neatest thing about this device is the new thing that nobody else has.

Sure, iPhone 6S and later had 'force touch', but the new HTC U11 has 'squeeze frame'.  That's the term I'm using, and every time someone mentions it I think of this.  They call it Edge Sense (which is a little close to the Galaxy Edge stuff... even though they're not really using that terminology anymore).  This will be super handy, as often I find myself trying to take a photo at a weird angle that holding the phone and trying to get a second hand down there or the thumb to reach the right spot is a little tricky.  Well, now you can just squeeze the device and it'll trigger the action (which you can set... is it Google Now/Assistant, is it opening an app, is it taking a pic).

The other highlight is (and I feel like we say this every new device) it received the highest marks from DxOMark of 90.  That's pretty good.

Well, we'll find out in June.  Hopefully, the price comes down by then.
announcement htc Phone squeezeable U11