My wife's review of the Moto Z Play 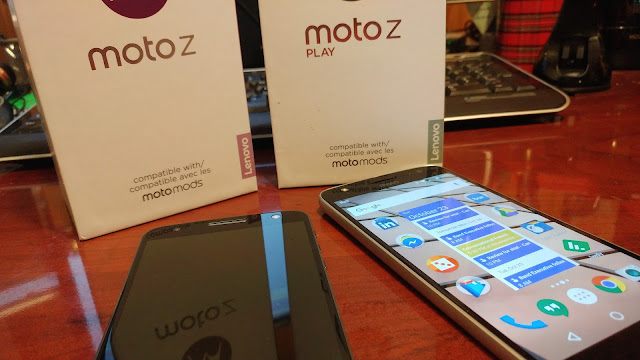 So, I've been loving my Moto Z - only recently have I switched back to the G5 (I was testing a couple products for it and figured I'd stick with it until the G6 review time).

I've bugged my wife for some time that she should use my Z Play I have on the shelf so we could both be on mod devices. (for those of you who would like a refresher, here's the comparison between the Z and the Z Play)

Well, with her LG G4 going the way of the bootloop, she opted to finally give it a go.

I set her all up and let her play with all the mods.  She enjoyed them and was happy to have a new device and one that wasn't stuck on some logo screen (more on that later).

After a few days I asked what she thought.

It's what I really liked about that phone too.  Not much difference spec-wise from the Z, and nearly no difference performance-wise.  But that battery lasts for days.  I offered to let her try the battery mod and her comment was "no point".

After a few more days she did come back and say the mod that she really liked was the speaker mod.  She could set it up while she worked around the house (prior she used to use bluetooth speakers or try to prop up her phone somewhere... this is 'all in one').

Most curious of all, is that I asked if she noticed anything different.  She had been on LG for almost 2 years and Samsung 2 years before that (and Nexus prior)... she said no.  No difference in the feel or interface.  "Oh sure, it looks a little different, but I can change that".  That's good to hear.  As a lot of us Android 'purists' out there extoll the virtues of a stock Android and seem to want to abhor any OEM UI ... but to the average user, it doesn't make that much difference at all.
lenovo mod Moto Z Play Review wife