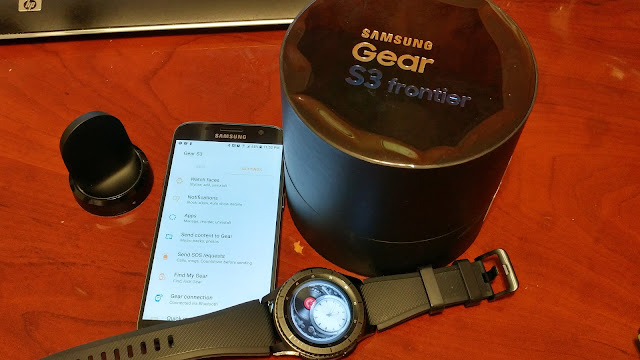 I love my smartwatch.  Ever since putting on the G Watch I've loved wearing something on my wrist.

Today, I'm sporting the latest Galaxy Gear, the Galaxy Gear S3 Frontier.  There's 2 Gear S3s out there, the Classic, which is the 'classier' device and the Frontier is the sportier one.  I'm more sporty than I am classy.  Yeah, I know what I said.

Now this is a bit pricier of a watch than others I've tried out.  This goes for $470CDN.  That's not pocket change by any stretch of the imagination, so let's see if this is something for you or not. 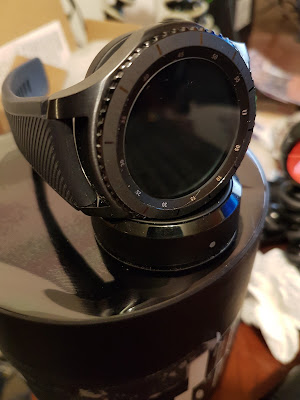 First up, let's run over the specs:


It's no slouch in the specs. It's funny tho', it's slightly smaller than my Moto 360 Sport, but feels WAAAY bigger.

And it's hefty, it's a noticeable chunk of weight on your wrist, but you get used to it fairly quickly, surprisingly enough.

Now, most of that heft comes from the crown/dial on it.  This is one of the main ways you interact with the watch.  You also have 2 buttons.  Top is 'back' and bottom is 'home/apps'.  Hit it once to go back to the home/main screen and then hit it again to bring up your app list. 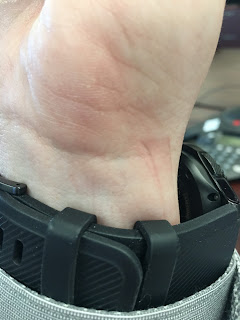 But before that, I want to talk about the strap.  You have 2 'holders' for the strap after the clasp, and I kept finding that they would pinch.  Not comfy at all.

Now, the watch is replaceable, if you want to find something else.

Personally, I just pushed the 2 together and then pushed them both up against the clasp.  It meant having a long 'tongue' at the end that flapped about, but it was better than being pinched.

Now, let's interact with it.

Like I said, the majority of interaction is done via the dial.  You also could swipe with your fingers, but it's not nearly as cool as fiddling with dials and buttons on your wrist.

Rotate it to the left and the screen moves to the left.  From the left of the main screen is where you have your phone notifications.

Notifications can be interacted with the same way as they can on the phone.  Swipe up to dismiss it entirely, or tap it and then you'll see what the message is, then 3 buttons on the right which give you your interaction options (like delete email, reply, etc...).

Replying from the watch is very cool.  It has voice, as per normal, but it also has a keyboard!  It has a T9 keyboard, which really makes me feel old school.

Rotating the dial to the right moves the homescreen to the right and that's where the widgets are.  Widgets are... well, if you have Android, you should know.  There's clocks, weather, app shortcuts (that's my favourite because finding apps is tedious).

Again this can be all achieved via fingers and swiping.  Which is a point about the interface.  You do a lot of dialling with the face, but to actually select something you have to tap it.  In the settings, there is an option to have it 'auto select' an option if you dial around and let it settle on something, but I didn't want it to have any accidental selections so I choose to tap.

Makes me think it should have had an extra button there to do your 'picking'.

Okay, that's the interface.  And it works... I was so surprised how well it actually is functional.  You look way cooler checking out your watch by the dial than sliding your finger over it.

So what else can it do? 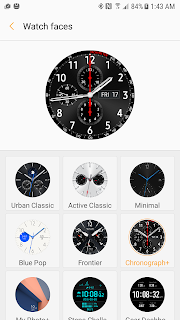 Pretty much a lot.  There's plenty of options for apps and watch faces that you grab via the Galaxy app.  You do all the customizations via the app as well, arrange the order of apps etc...

There are some really cool watch faces out there and like Wear they are 'interactable' (i.e. you can tap bits on the screen for extra info).

As for the sensors, they work very well.  Heart rate sensors work and Wifi is good, GPS is pretty accurate.  No complaints all there.

I hadn't had an opportunity to test out the NFC of it, and it's supposed to work with Samsung Pay (but I've never really used that either), and apparently it has MST for more than just regular tap to pay.

Now the downside is that most of the health activities goes through S Health (but chances you are already a Samsung user), so if you're a Google Fit like me, then it's not going to work properly (although it's supposed to). 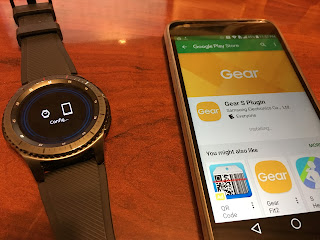 Now, you can use this with a non-Samsung phone, just check the compatibility list:  http://www.samsung.com/global/galaxy/gear-s3/device-compatibility/

I put it on my G5 and it worked just fine, you just have to install the Gear app, the Gear plugin and some Gear accessories app to make it work.  And you'll also have to install S Health to do any of the activity tracking. 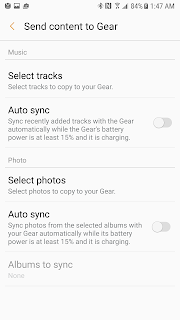 Other features it has, which is pretty neat, is the speaker.  With the Gear app you can transfer music files over to the watch and have it play out of the speaker.  Cool.


You could also use it to answer phone calls this way, and that's handy.

But, the best of all feature is the super battery they've put into it.

380mAh isn't that much more than others... about 25% more than my 360 Sport.  But the fact that there's no ambient display (i.e. an always on display) means that the battery lasts super long.  I had 3 days of use and it was still at about 20% life.

That's a big feature.  Sure, it's because I have ambient display on my other watch, but I don't think it would last that long.

So, in the end.  $470 for a very solid device that has a cool way to interact and a speaker to be all Dick Tracy like.

Is it worth it?  My opinion is that it's a little on the pricy side.  For the $180 more I'm not sure I'd get the usage out of the extra features.  But it is a solid watch that I know will be durable.  In the end for me, it comes down to the strap.  As much as I know I can change that, it still has me looking elsewhere, because as awesome the features are, it also has to be comfortable.
Galaxy Gear S3 Review samsung SmartWatch