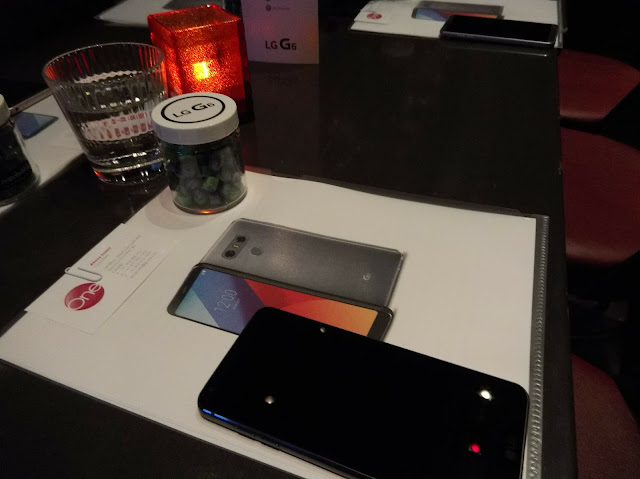 Some days life just works out.  For me it was an opportunity to attend a few work meetings in Toronto, on the same day LG held a private event to showcase the new G6.  Being a writer in northern Ontario makes it really hard to be able to get access to these kinds of events.  Sure, anybody can scrape the news circuit and come up with opinions, but getting an early shot at a device so that you can have a truly formed opinion and provide something of substance is really important.

I'm glad I was able to go, even if it was a few hours with the device and I didn't get to take it home (LG formed a veritable wall of staff guarding the only entrance/exit to the meeting room to ensure devices were handed back).  Hopefully I'll get to be able to spend more time with it soon.  To me, it was that good.


The TL;DR version is I was impressed.  The only piece of nitpicking I could find is that the black becomes a fingerprint magnet.  Everything else I liked.  It's a shame it lost the IR blaster, but it makes up for it in other ways.

First off it felt like (what I would expect) a speed dating event.  You got into the room and there were seats and at each seat was a phone and spec sheet.  Take your pick of the seat. In Canada, we'll see the 2 options of the phone, black or grey (I forget their real names, but that works).

We sit down and immediate we can play with the phone, read over the spec sheet and munch on some cool candies before we have an LG trainer run through the highlights of the device.

We're then allowed time to play with it and ask the trainers in the room specific questions.

I'll try to be brief with my impressions as it's not a full review, that will hopefully come later.

I brought my LG G5 for comparison, and it really is the same size in the hand as the older phone, which to me is my ideal feel.  5.5" phones (like my Moto Z) are doable, but that's my upper comfort limit.  So, not only does this feel comfortable in the hand, you get a screen real estate of something much bigger. 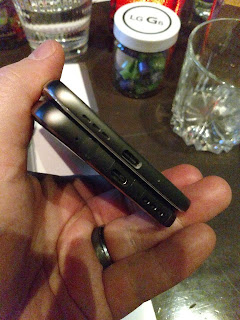 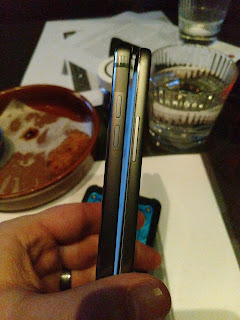 I still really miss the back buttons for volume, but I'll live, it does make doing screen shots harder to do.

Really, this phone felt comfortable to use.

Little things, like the camera bump on the G5 (which was barely noticeable before) is just not there at all on the G6 and makes for a nice device to just lay on the table. 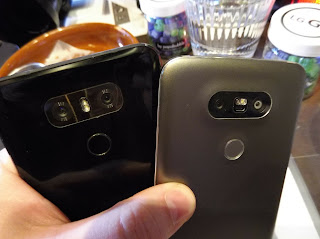 The only issue I had about holding it was the black back really attracted finger grease and I had to keep wiping it off for a snap of it. 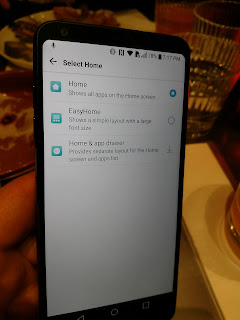 Now how about that display.

You were really hit in the face with the real brightness, but they had it turned WAAAY up (the room was kinda dimly lit, but still it was a bit of a trick).  Setting it to the same levels as the G5 there wasn't much difference in ho it looked quality wise.  What was better was the tall-ness.

Yeah, it's not really noticeable that it's taller, until I put it next to the G5.  Which was really cool.

Then there's the rounded edges.  I thought I'd hate that, but really, I didn't notice it until much later when I was putting the other phone next to it, and I looked at the angled corners and went "that's weird".  Especially as you really only see it on the top of the screen as the bottom is handled by the black bottom navigation in most cases. So it was a very seemless transition. 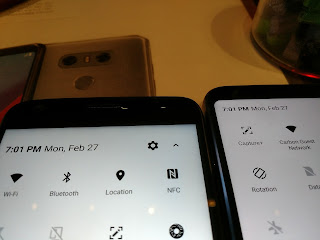 Now, it touts that it has HDR10 / Dolby Vision quality, and there was a video to watch, but I couldn't see much difference between the G5.  Maybe when I get more time, I'll watch some flicks and see if I can see any difference. 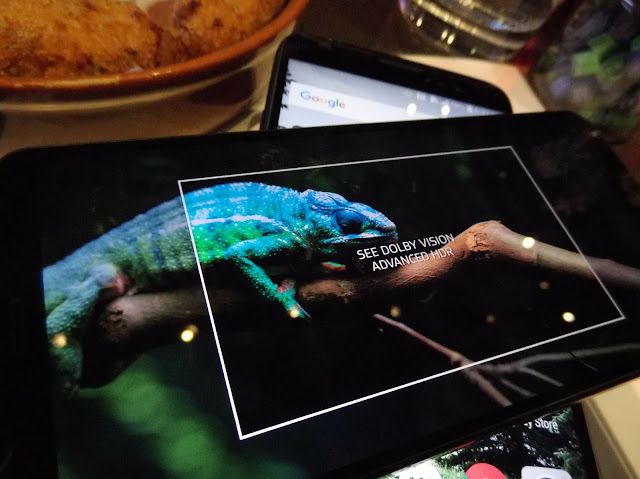 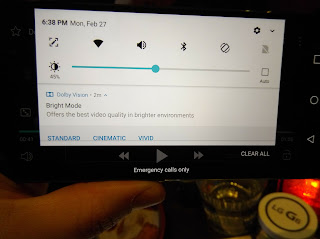 Now how about using the software?


Sure, this is where people are going to say "but the BLOAT".  Really, I think those are the final holdouts of purists to say why thye shouldn't like anything but Nexus.  The bloat is pretty minimal. What they did add was practical.  The navigation was fairly simple.

There's some learning to do in the camera mode stuff, but I'll talk about that later.

All the typical LG stuff is there that I like, KnockOn and KnockCode (that took me a while to find for some reason, probably because we couldn't do a fresh start on the device so when you do it from the beginning setup).

The settings menu looks the same except for the fact that the icons now have a little bit of colour.

The icons are the same but now have rounded edges on the 'frames'. 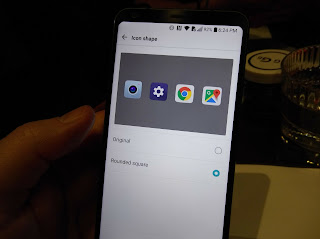 With the 'tall' display you can get a little more 'work' out of it when you turn it into landscape mode.  Now they had a neat feature where you can have a FULL display, so no navigation buttons on the right and get a few more pixels out of it, then they'd have a floating navigation button. 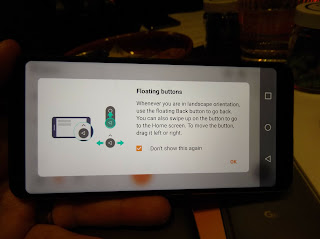 But it's ONLY working on just the calendar app.  Weird.  You would have thought they rolled it out to more of their built apps than just the one.  Will be interesting if they roll that update to other apps or even roll it back out of the

Now, my sad moment was realizing the feature of the IR blaster was gone.  Shucks.  Their reasoning behind is that they were really looking at what customers used.  The trainer giving the presentation anecdotally suggested that he's used G line devices as long as I had and can say he's only used it a small handful of times in all those years.

Where it was made up was the inclusion of Assistant.  Sure, other devices will get that, but this is built in.

Now, like in UX5.0 there's no app drawer.  You could load up the home screen UX4.0, but it feels like a backward step.  You could install your own launcher.  Or, depending on what you need, if you swipe down from the top you can search through apps, so it may not be as fast as what you might like, but it's a new fun way to do it (very similar to how iOS has that feature).

Now, how about that camera?

Personally, this is where LG has for years been able to shine.  So it was a shot in the arm when they announced that the CCD is now only 13MP.  Now, they moved it to a lower MP so that they could put 2 in there.  Whereas last year's was 16MP but the second lens was 8MP, this year, there's parity.  They also said it helped keep the camera bump down.

For me, looking at the photos that it churned out (visit my album of a few samples here: https://goo.gl/photos/mURobrnBR7SRwo4x8). 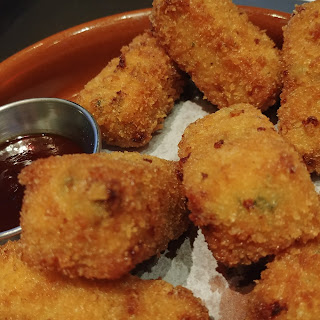 It was a dimly lit so it wasn't ideal conditions, however, I think it did a good job of getting a good shot (almost better than my Hasselblad mod).

It was nice to see the wobble of the optical lens in video mode was way better.  There was still a little bit of a liquid feel, but much nicer.

There's a ton of options to play around with the camera feature, and when I get the device I'll do a full review on just that.  But you get the real sense that this phone is all about the camera.  I'll leave some photos below on some of the options.

It's a great device that you wont' notice that it's an awkward ratio... you'll just use it.  You get a great handfeel with a great screen real estate, very little bezesls, great display...

There's some flak out there that it's not the most recent Snapdragon 835.  I can't believe someone would say that as they've never seen how hte 835 handles, to say it's noticeable over the 821.  I've used the 821 in the V20 and if you think that's not enough... give yer head a shake.  The 820 in my G5 is still more than adequate for me.

What's especially nice about this device they've added is it's IP68 rated (and 810G).  But my favourite feature is that it's PMA & Qi compatible.

Really, how many years?  Since the G3 I've been talking about the odd way that some of the devices were or weren't compatible with wireless charging.  It's nice to know that we will have it, and in both flavours.

The only hold out now will be the price. 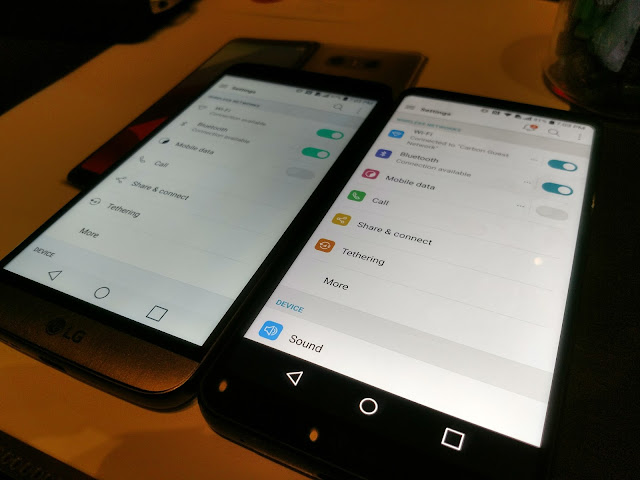 Some more shots of the camera features: 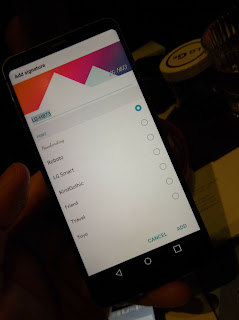 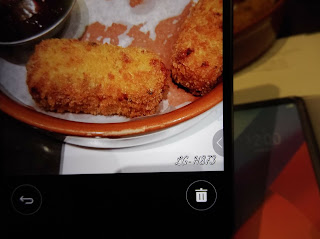 you can put a signature on all shots 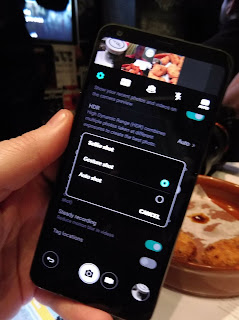 still has the hand gesture, but also an 'auto shot' for selfies

difference between both back lenses 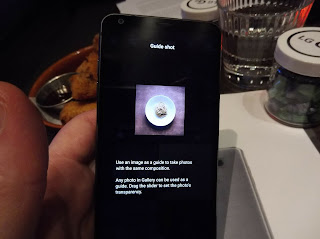 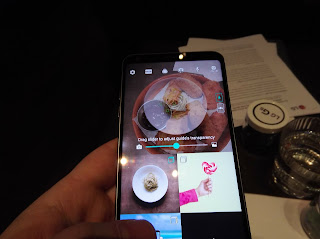 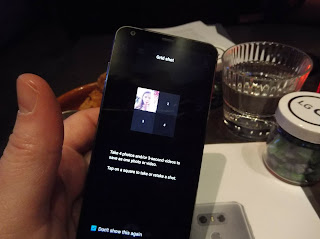 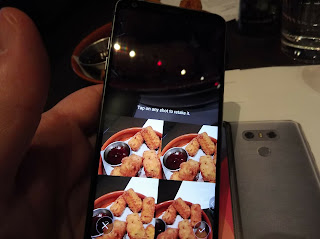 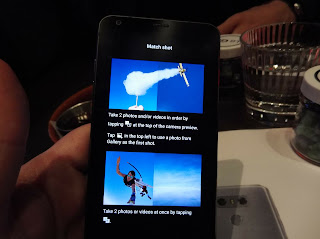 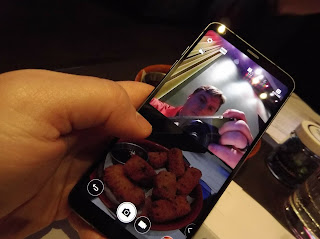 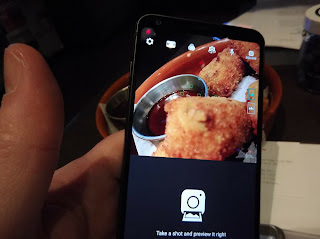 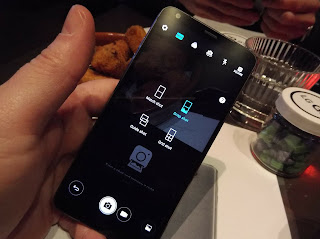 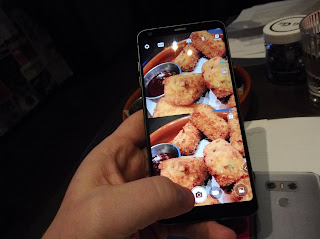