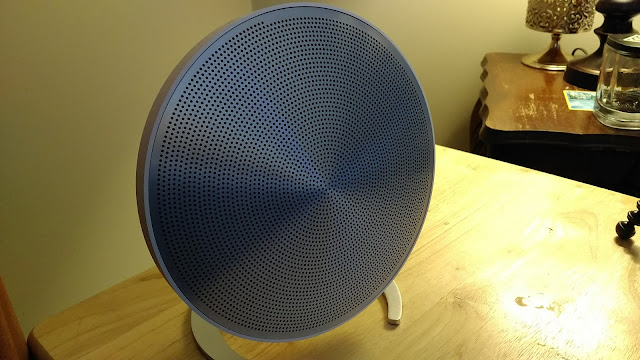 Okay, so this thing looks like a fan... but it's a speaker. (it's the first thing my son said to me when I pulled it out of the box "oh, I thought it was a fan")

But use it, and it's actually hella impressive.  I mean, look at it, it looks like it's a bold statement on something, and fire up some music and it will blast you out some tunage.

Inside the 'disc' there's two 10W speakers, with some really good bass, as it can really make things vibrate (well, for its size, I'm not going to compare it to my 350W subwoofer for my surroundsound).

It's a real 'looker' as it doesn't quite fit in to my decor really, but it's neat.  Almost retro in a sense.

Behind the disc there's the ... I'll call it the 'bass end' (like it looks like a big subwoofer and that's where the magnet coil would be) ... they have the input stuff underneath (so turn it upside down).

You see there's microUSB to plug in and charge the 4000mAh battery (which should net you about 8 hours of play time), a microSD slot and the 1/8" stereo input (both for direct playback).

Up on the top of the fan part we have the actual controls. 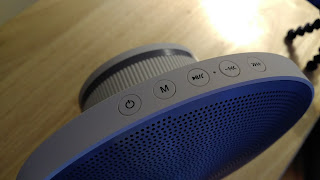 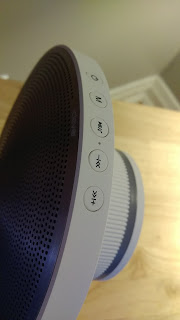 There's power (you'll have to hold down power to turn it on for about 6-10 seconds I've found, versus usually just a couple - this also lets you adjust the light ring intensity with a short push once it's on), M (let's you switch between SD card, line in or BT), the Play/Pause/Answer button (yes, you can use this as your speakerphone and answer calls) and your Prev/Skip buttons (and *sigh*, yes, you have to long press for volume, I hate when they double up the buttons)

Anyways, pair it up to your device of choice and it'll act like your normal speaker.

And let me tell you, not only is it true stereo (you won't get too much channel separation because they are fairly close) it actually really thumps out some bass.

At full volume you do not want to be standing next to it.  It'll definitely fill a medium to large size room for you.

Now, for this odd-looking duck with great sound you are going to be looking about $100USD (sorry Canada, no options for shipping yet, but I'm pressuring them) but it's on sale at the moment for just $80.

Do I think it's worth that price?  I must say, for its size I can't think of something that really punched out that volume, but it's a lot of money to put out.  But I can see it having a place in the right medium to larger sized room with a modern deco look, it'd fit right in.