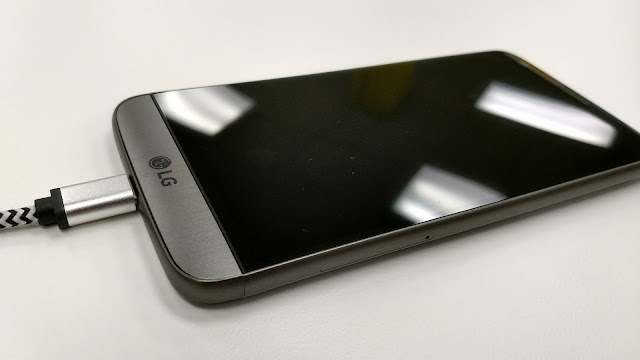 So, I have a struggle... every day I look at the phones on my desk and pick up my Moto Z.  I do, because I just love the mods.  It's got some issues still, it's not PERFECT (which phone is tho'?).

The struggle is that next to it is my LG G5.  Loved that phone.  Still do

The camera is awesome (feature I miss the most), size is just right.  Too bad about the mods tho'.

Well, the new G6 is around the corner, last year's came around April 1st, and even that was earlier than previous years.  This year's is heading to come out around the end of February (which makes sense as MWC is February 26), and then be ready for sale soon thereafter.  The thinking is that they probably want to get the device out quickly after what's being called a 'flop' of a phone, the G5 (not the words I'd use).

Well, the phone has had some details let out, and some rumours, let's take a look:

The next bit comes in as it's to have QuickCharge 4.0 and have wireless charging.  This comes from a discussion I had with an accessory manufacturer who suggested that that rumour might have some merit, and how they'll be releasing some QC4.0 and Qi charging (note, Qi, not PMA) charging around the same time

Yes, that would be cool! It seems a QC 4.0 devices with wireless charger

Just rumours, but we will release some QC 4.0 chargers and new wireless chargers at that time.

Android Authority has done a good job of collating all the other rumours, if you'd like to take a look at their article:  http://www.androidauthority.com/lg-g6-release-date-price-specs-features-738704/

Again, mostly rumours, so take it with a grain of salt.

The company will supply the panel to LG Electronics for its next flagship smartphone this year.

The most notable feature of the new mobile display is its “18:9 aspect ratio.” Displays, which take up the largest area of smartphones, have evolved from an aspect ratio of 4:3, to 3:2, 5:3 and 16:9; lately, a 17:9 ratio display has been introduced. Due to increasing consumer demands for bigger screens, LG Display developed the 18:9 aspect ratio display to provide more immersive viewing experiences.

The new 18:9 aspect ratio represents LG Display’s direction on how displays should evolve, while meeting the rising trend for watching videos on smartphones. The 18:9 aspect ratio is also optimized for multi-tasking, using dual-screen functions.

The new product not only provides excellent touch responses, thanks to the company’s exclusive inTOUCH technology, but also helps achieve a thinner and lighter smartphone due to the absence of Touch Cover Glass. The module (excluding the cover glass) is super slim, being less than 1mm thick, and has reduced bezel width by 0.2mm (20 percent) on top, and by 0.54mm (10 percent) on the left and right sides, compared to conventional QHD LCDs.