SCAD.edu's AR catalog is a glimpse into what this new tech can do

Posted by Ryan Moore on January 06, 2017
Sure, Augmented Reality and Virtual Reality have been around, but it's in that "well that's cool... put it back on the shelf" sort of corner forever it seems.

The other day I was sent a prospected/catalog from the Savannah College of Art and Design and it's just filled with a bunch of cool things you can do with both AR and VR.

We just saw yesterday that Asus ZenFone AR will be both useful with Tango and Daydream (AR and VR), so I think there's going to be some neat pushes in that direction in the next while.

The kit it comes with comes with the catalog, and a cardboard VR viewer.  Very cool. 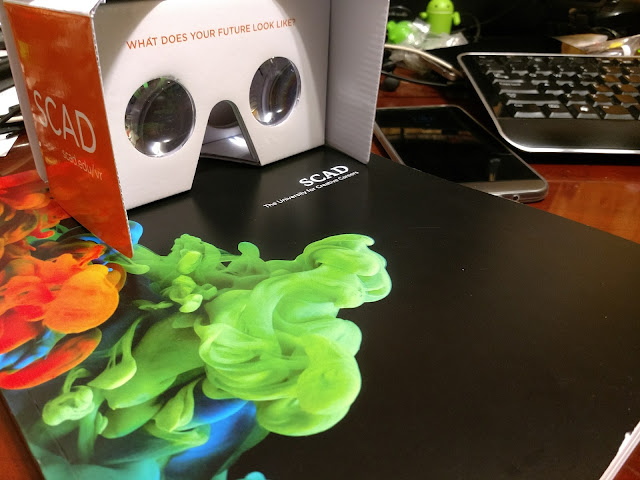 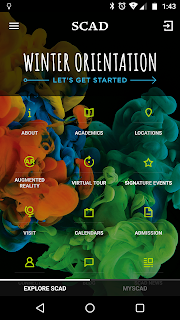 You download their app and then go to town.

With the app you can choose the AR option and then use it to view the catalog.  Where in the catalog it says you can point it, go ahead and watch the interaction dance away on your phone.  It's neat.  I've seen several AR things before, but this really takes it to the next level.

And, given that who this is geared for (those in the creative fields) it's just a perfect blend.

Throughout the book there are over 100 AR pages that you can make some magic happen and it's just neat.

I'll show some examples below. 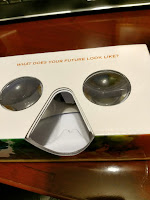 There's also the Virtual Tour option for you to use the VR viewer, but I couldn't get it to work.

Regardless, I had a ton of fun flipping the pages and letting the features jump off the page.

It was a little hard to try to show you how it works, but you can see.

In some pages a video starts up (like you can see on the front cover), on others there's mini boxes to tap and take you to more information on their site, or other videos or seeing items in 360.

It's a real neat glimpse into what this tech can do in the right hands.