Posted by Ryan Moore on November 07, 2016
So, this phone was already reviewed by +Martin Guay a couple of weeks back and you can view his review here.

My review will be shorter than his as I don't think there's need for a lot of duplication. So for a lot of screenshots and photos, check out his review, mine's just going to be the video below.

Essentially, and let me preface the entire review on this, this is a phone for $300 (or less).  Outright.  For that money, you're not buying a Ferrari ... so don't expect it to be as good as some of the top end devices out there.  But for what you did pay for, you're getting a decent device.

Something that many would be totally sufficient with.

Personally, I noticed that it wasn't as fast, staggered a bit on heavy duty work ... but for typical reading emails, watching videos, etc... it zipped along just fine.

So, determine what you're looking for in a phone and if it's not going to be meant for a lot of heavy duty work, then this will be a perfect companion.  Great for that phone you want to pop a ROAM SIM card into when you travel.

Anyways, let's take a look at some of my deeper thoughts on the device. 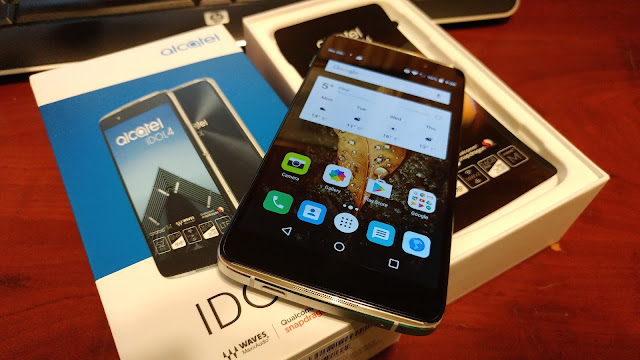 When we look at the specs:


It can leave a lot to be desired.  16GB doesn't get me far in terms of apps to put on it (I still refuse to put my trust in SD cards) and the 2GB RAM doesn't hold a lot in there for switching back and forth.

But for most people it's probably just fine.

What you don't notice in the specs that it really has that's great is the display.  Sure, it's only 1080p, but the colours look great!

Also, the sound is awesome.  How rare is it these days to get true stereo speakers.  And not just 2 tiny speakers at the bottom of the device, but separated by the display... so real distinction between left and right.  And it's clear sounding too.  Good volume.  I've had to keep it fairly quiet when I use it actually.

The build of the device feels sturdy, with aluminum, glass and a wee bit of plastic.  It feels good in the hand.  Personally, 5.2" is a bit small for me and I actually struggled to keep hold of it.  If it were just a little bigger, that would have been ideal.

The big difference this year from the Idol 3 is that there's the addition of the Boom Key.  It's positioned and shaped like you would expect a 'power' button, but it's not (although it can wake the phone up with it).

The key can be set up to perform a bunch of different tasks ... by default you can use it to:
- display a weather animation from the launcher home screen
- bring up the camera (if you tap it 2x from when the screen is off)
- turn on boom sound when listening to music
- cycle through a bit of a slideshow / rearrange a collage in the gallery

And more, but those are the main ones I've noticed.

Getting into the software, you'll notice that it's still very much looking like AOSP, which is fine, but the keyboard is the AOSP variant, and then has the swiping turned off, which is a shame (but easily fixed by downloading either Google Keyboard or SwiftKey, etc...).

I still love that you can flip the phone up 180° that the phone just 'flips' and then keeps on trucking.  So cool.

There's the DJ mixing option with the music app, I just ... personally, don't get it.

The launcher has a neat bit of 'parallax' to it (i.e. the background shifts slightly as you move the phone) which is neat, and with a good photo, the quality of the screen really shines and makes it look really cool.

And then there's the camera.

I was less than enthused at the quality ... but keep in mind the price of the device ... but it has some really neat options to play around with, it even has manual mode (max shutter time is only 1/2s tho').  Even neater was the option to play around with the editing of videos.  Very simple filters to apply for your Vines or Instagrams or whatever you use.  Nothing "Adobe level", but simple to use.

And that's what most people want.  Something simple to use.

I've given the phone over to a couple of teenagers and they instantly loaded up (after I factory resetted it) their Snapchats and Facebook etc... and they didn't notice any issue.  Simple, straight forward.

For me, I'm a heavy user and I noticed that there was lag going back and forth and loading up multiple accounts of everything.

But, for the right customer, $300 will be very well spent.
Alcatel Idol 4 Phone Review video