Posted by Ryan Moore on October 14, 2016
So, for the past year I've been running.  Not a lot, or not as much as I would like, but I do run.  And when I do I need my tunes.  Carrying my phone with me is treacherous and I'm afraid I'll drop it, and finding running wear that has zippered pockets is impossible I'm finding.

Often I'll just get my watch to sync music and pair a set of headphones to that.  That's been the easiest.  But then to share anything or log anything on the phone requires me going back to the locker and entering it in after the fact.

Sometimes I'd like to take my phone with me.

For those times this bag from Mpow might come in pretty handy. 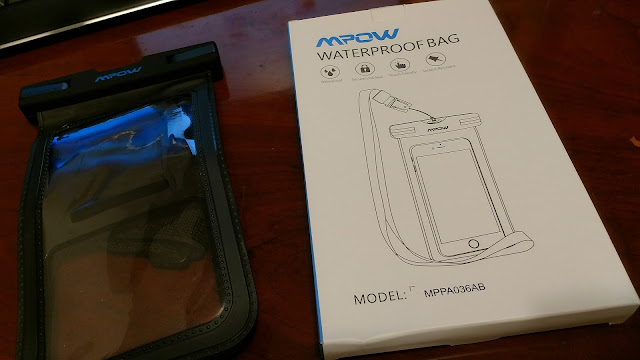 I used to have a dry sack like this a long time ago, when phones were smaller and loved using it for going camping.  So at the least, it's a great companion to take with me when I go canoeing or something that I know the possibility of getting wet is there.

The latch is pretty easy to get on, and it is IPX8 rated (meaning it can survive submersion).  I didn't test it as I thought it might be a little 'too easy' to open and close - but it'd definitely handle just about anything I could throw at it.

The downside to the clasp / latch pieces can come off, and if you're not careful could get lost and then you've lost all protection. 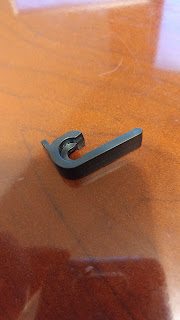 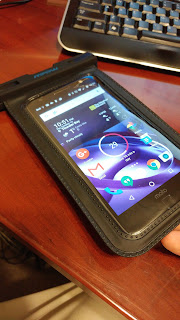 Surprisingly enough, it fit my Moto Z, when it says it's initially for iPhones, but compatible for up to 6.0" phones, I'm a little skeptical, but it worked, and actually was the perfect fit. 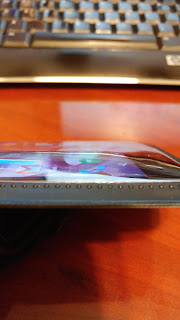 When putting your device in these kinds of bags tho', you have to be careful to squeeze as much extra air out as possible.  It'll be okay to tap the device, but doing any swips or pinching, dragging gets very hard if there's air in the way.

Depending on the phone as well, it may be hard to activate any of the buttons.  Like the buttons are just essentially at the very edge of the plastic, making it hard to reach.  For my G5, the arm band pretty well blocks the power button.  Also (as I'm sure it has to be pointed out) the fingerprint sensor doesn't work, and if you set up a pattern lock, it may be hard to draw.

One thing to note, the rubber/plastic they used you can tell that it's fairly newly formed when they throw in the cardboard 'sheet' in the case for shipping (it's a sign that says what it does, you take it out and put your phone in) as there's an imprint of the ink from the cardboard on the plastic.  You can clearly see the logo and the "IPX8" on the plastic in the right angles.  It doesn't impede, just looks funny.  I tried getting in there with a lightly damp cloth (don't want any real water getting in there as it'll never dry out easily) but it wouldn't go away. 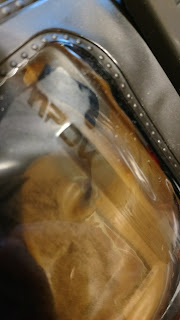 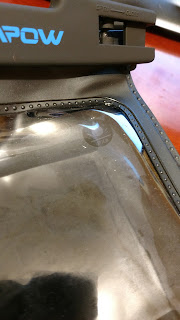 Then there's the arm band.  I was excited, because I've been looking for one that isn't a million dollars or only meant for wee tiny phones. 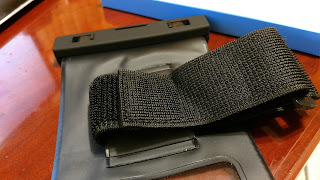 First up, the band can completely come off the back.  and getting it on your arm requires some dexterity.

I was surprised how well the velcro held actually.  See, the band is pretty narrow, compared to the overall case.  So, I expected to the 'case' move around and flop on my arm, and it did somewhat.  It felt pretty bulky, what with the waterproof topper.  All throughout the flopping (I only used it for some short jogs around the block, as I've been pretty hectic with little time for a real run) the velcro actually held. 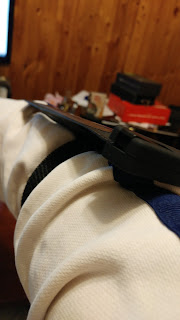 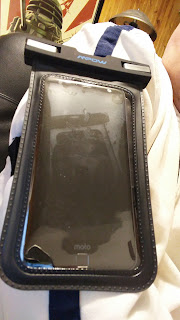 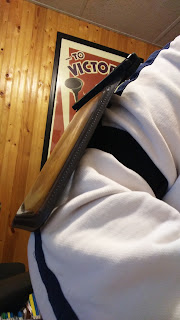 Now to ensure that it didn't flop around TOO much, I cinched up the velcro pretty good.  I'm not sure how tight it SHOULD be, but I did it where the point like it almost feels like a blood pressure cuff.  The 10 minute jog and the 20 or so minutes I've been wearing it here at the desk I haven't noticed any ill effects at how tight it is... you may have to find your 'sweet spot' on the velcro.