Posted by Ryan Moore on October 03, 2016
I just had reviewed a few bluetooth speakers, because it's nice to have speakers to enjoy your music.

Well, this new Moto Z series has some tricks up its sleeve so that you don't have to fiddle about with a bunch of separate accessories and have something ready to go as simply letting the magnets touch.

So, today's Motomod review is the JBL Soundboost speaker. 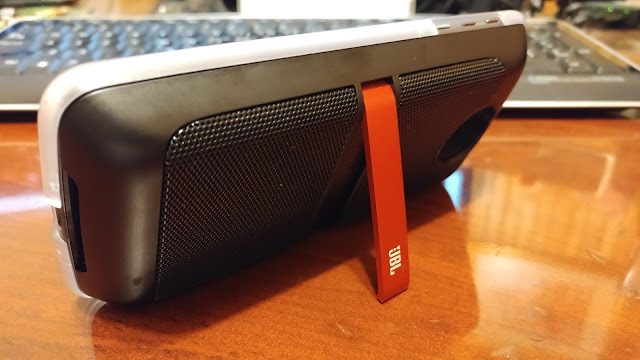 It is quite the bit of a hefty mod.  Much bigger than anything else, and it has to as it's got to pump out 6W of stereo sound (that's more than that iClever speaker I just reviewed).  And yes, I said stereo.  There's so much more clear sound with true stereo.

Sure, $100 for the speaker is pricey, but none of them snap on and work as easily as this does.  So you will pay for that convenience.

What's nice about this compared to other speakers is that because it's a Motomod, not only is it faster to start working, it gives you the proper readout of the battery on the device.  They have that persistent notification.  Going into the settings there's not much there to really muck about with, and why should there be?  Just listen to music. 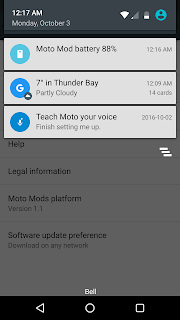 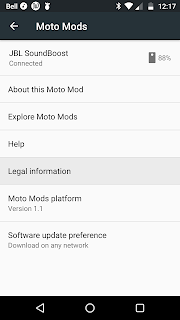 The sound is clear, it's just unfortunate that it faces away from you - but it still does a pretty good sound volume to still fill a smaller room.  To help, it's got the little kickstand to keep it upright. 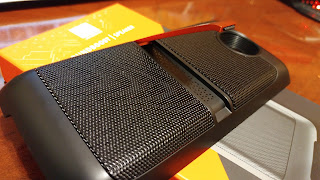 The sound should continue for about 10hrs (1800mAh of battery).  The only downside is that if you want to charge up that battery you have to plug it in off of the phone, it can't charge both for some reason (unlike with the Incipio powerpack or the Insta-Share).

While it's charging you can check the battery by touching the little button on the back and it'll give you a light. 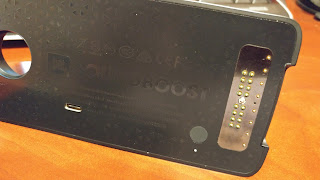 So, yeah, it is a little bit pricey compared to other speakers - but it brings it and you'll appreciate it for what it is and what it isn't (separate, clumsier...).  It's just simple. 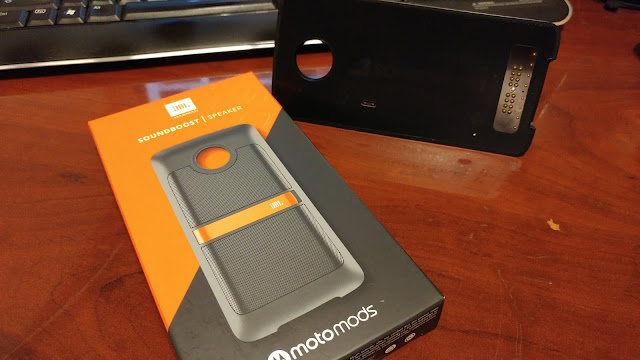