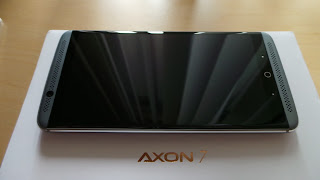 Axon 7 by ZTE. A beautiful phone at a great price, but it does have some flaws. Should the flaws be enough to prevent you from buying it this Axon 7 apposed to the wildly explosive Note 7 at double the price? Get my opinions and points of view in this review of the ZTE Axon 7

UPDATE: I've updated this article to reflect the recent OTA just a couple days after I published the Review. You can find the article about the OTA Update and its Changelog Here.

I'm not the first to review review the Axon 7, but far from it to be frank. So for this review I'll be doing my own personal review, but also tackling some negative and positive responses and playing with them a little as well. So let's get into it. 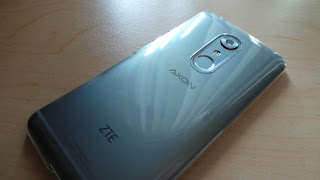 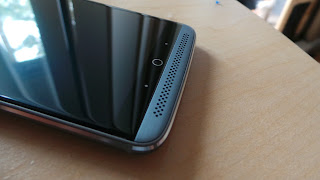 The quality of build is through the roof on this Axon 7. Holding it in your hand, you cannot tell it's $500, half the price as all the top competitors of equal specs and quality. Other people and reviewers have made many comments that the phone feels slippery if you don't slap a case on it, personally for me I didn't suffer such issues. However, I do use the clear TPU case provided for extra protection, and it itself is also very nice feeling without any sharp little corners that some cheap TPU cases have at the corners.

Navigation buttons: Pretty much every single reviewer has pointed out the dislike for the navigation buttons being too close together. I must admit, it was a little odd for the first day, but you get use to it really fast. However you don't notice the benefit to this until a day or two later. Because the navigation buttons being closer than normal, this also allows me to access both back and multitasking button easily while using the phone with a single hand.  On my past phone Galaxy S7 Edge, holding my phone in my left hand, was always a drag trying to tap that back button all the way on the other side of the phone. So that being said, I can see why some people hate it, but I feel it does add some usefulness as well.

If you want to be one of those guys or girls who wants to be flossy walking down the street turning heads, this phone is going to help you achieve that goal. 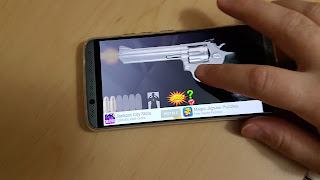 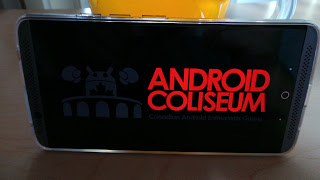 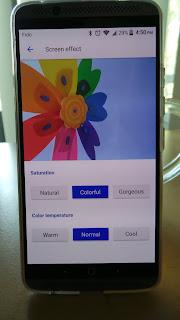 Of course the pictures above don't show justice for the screen, but coming off of a Galaxy S7 Edge, I'm comparing the Axon 7 to one of the best displays on the market today. I can honestly say the quality is on par, however the Axon 7 is a little dimmer, but not by enough to ruin any experience, even in bright sunny environments.

This 5.5 inch 2K screen isn't going let you down in any way, and if you feel the colors are slightly off, they give you the tools to adjust it yourself to your own personal preference. I personally use it on stock, as I feel the display is just amazing as it is. There really isn't a whole lot of details I can give without getting all geeky with specs, but honestly, who really wants to read a bunch of numbers anyway. This display is rockin'. 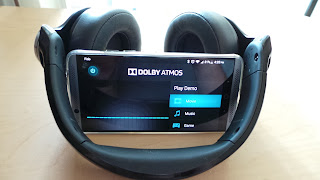 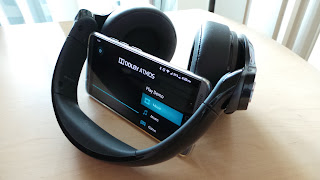 Now sound quality is where the Axon 7 shines the most.
The 2 front facing speakers are simply the best I've ever used in an Android phone, and I'm comparing to all 40+ devices, Sony's, HTC's, Nexus', etc and this $500 Axon 7 simply destroys them all in quality of sound, clarity, loudness, and tweak ability to really push that sound, and get it personalized for you.  I'm able to lay this phone down on my bathroom shower table and turn on my music and crank the audio and hear it loudly and crisply past the noise of the shower and bathroom fan, this Axon 7 can put smaller bluetooth speakers to shame.

If you're lucky enough to order the ZTE Axon 7 from NewEgg in Canada where they're offering the Monster nPulse headphones for free for a limited time, you'll have an even sweeter deal on your hands and will be stuck with a tough choice. These nPulse headphones sound amazing and are probably one of the better headphones I've ever used, but combined with the 32bit Audio DAC the Axon 7 provides that the nPulse takes advantage of, they harmonize beautifully. The tough choice is, do you sell BNIB for $150-$200 for extra money saved, or keep and use them. If you sell, the total cost of the phone is now about $350.

In short you can blast the Axon 7 speakers in almost any level of noise environment within reason, and have no issues watching videos and listening to music with your friends. 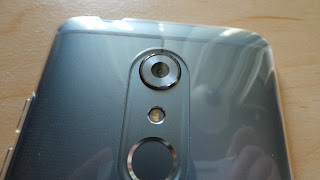 So, the camera on the Axon 7 is very hit and miss. I'll post a few of my own personal shots down below.

Coming from the Galaxy S7 Edge, I was expected to be let down, and sadly I was, but not by as much as I thought I would be. You simply cannot compete against a top of the line camera with another device and expect to be impressed, that being said the Axon 7 camera isn't terrible, but lacks some polishing of the $1000 range phones.  The Axon 7 is a little more prone to getting blurry pictures with moving subjects, and lacks a good burst shot. Limiting me to 20 photo burst over 1 second is okay to work with, but then the poor gallery provided shows them as a stream of 20 photos on which I have to manually select which ones I want to delete and keep, which is not the most ideal setup, and feels very clunky.

Well lit shots come out pretty great, colors are very accurate, however when you go inside to lower lit areas is where you start to see the issues. A night mode is provided, but I found it made things brighter, but made all the colors go crazy as well.  There is one useful feature to help remedy this, and that's a solid on flashlight within the camera app.  Rather than just a flash while taking the picture, you also have the option to just simply turn and keep the light on to help you get that focus and shot, on top of that you have a 1-7 brightness slider to ensure you don't white out your image with an excessively bright light.

All in all, the Axon 7 will get the job done, but don't expect to impress your friends with it. This is probably the weakest point in the Axon 7.
In an argument, I like to lean on the phrase when someone says my camera could be better, I reply with "Yup, but I can buy a $700 Camera with the money I saved by not buying an iPhone"

UPDATE: Since the OTA update V1.0.0B27, the camera has drasticly improved, and low light shots have also been easier to work work. Granted it's still not at the level as Samsung's Galaxy S7 or Note 7 camera, but it definitly improved things.

The battery life on the Axon 7 is a little hard to tell at the moment. I estimate that it's about even with the Galaxy S7 Edge, which gets me through an entire day. I normally get 4-6 hours of screen time depending what I'm doing. I know my descritption is vague, but it honestly hasn't been long enough to give a full detailed list, and I don't want to mislead anyone.

as of right now, It's fiarly good.


At the end of the day, I sold my Galaxy S7 Edge in replacement of the Axon 7, Why did I do it?

So, it's time to get down to the nitpicky of things. I don't often like to harp on little things here n' there, but the sake of reviews I do. So let's smash this phone around a bit.
Nit picking the best I can, that's all that I can come up with.
This is an amazing phone for $500, and it can easily compete with the $1000 phones of today. If a poor camera is enough to scare you off, just take the $500 you saved and go buy a good camera that'll kill any phone out there.

There are things I missed in this review, but I don't want to drag it on overly long, so I just hit the major key points. If you have questions, feel free to post them below, and I'll try to get to all of them I can.

Final Thoughts Update: Pretty much every single minor issue I had with the Axon 7 a few days have all been fixed with the V1.0.0B27 update pushed days later.  I have to give major credit to ZTE on this one, they are seriously on top of their game here. ZTE Axon 7 even got the September 1st Security patch before many others, including Samsung.