Posted by Ryan Moore on September 14, 2016
I should start a series of "Ryan gets burned" by cheap accessories online.  It's the part of being a bit of a gadget guy, you tend to look pretty easily at the odd assortment of accessories online and go "aw, heck, why not".

Often, I get exactly what you think I'd get.  Something cheap.

Yesterday, I ordered this case from eBay - it's a flip case for the G5 for $4.  What can go wrong? 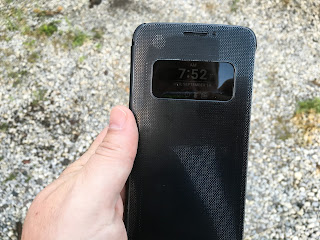 Well, it does work as a flip case.  There's the nice window where you can see the always on display (or if you have that turned off it'll display if you tap it).  The front of the flip has a bit of a 'perforated' look to it as it's meant to work if you have a phone call, there'll be the barely visible icons for answer or hang up and your touch of the case actually works through and can answer. 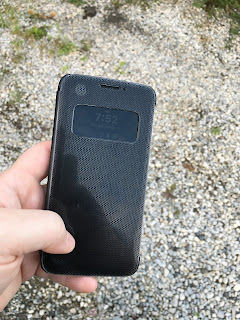 Now, the case doesn't sit itself super flush with the face of the display.  In others, there's sometimes a magnet to hold it in place (and what's used for it to recognize when the flip is opened), but the magnet is closer to the spine, so if you leave it sitting, the hinge can leave it that the end of the flip is slightly above the glass (you can see it at the front as a bit of a white circle).  Not a big deal... but makes me go meh. 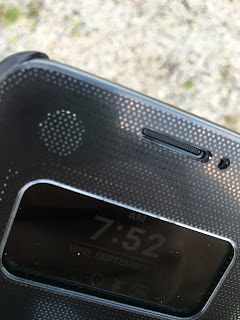 The back is a harder plastic with a bit of a 'lift' away from the back that the fingerprint sensor needs to be a little more 'exact', versus very easy to use.  Not hard, but just not as easy as it once was. 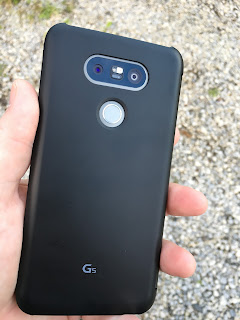 I was going along and saying "not bad" actually... maybe I'll actually use it.  Then I flipped the lid around.  I'll mostly use it that way, and 2 things happen.

First the window slightly obscures the fingerprint sensor.  It can just about read half of the time (which is cool because about half the finger is touching it). 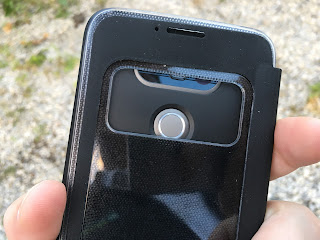 Secondly it obscures the cameras almost entirely.  So if you want to take a photo with this case on you've got to look like an old person and hold both the case flip lid and the phone.  To me, that's a deal breaker. 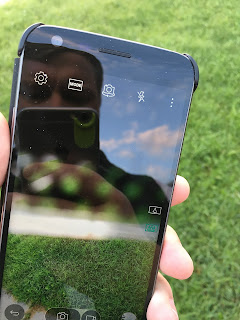 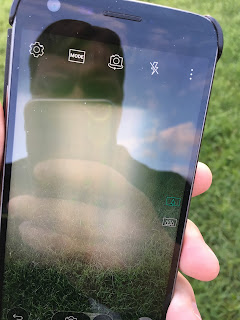