Posted by Ryan Moore on September 27, 2016
So, the other day I received a package from Moto as I missed out on the release party, and it was the new Moto Z, Z Play and a bunch of the available Motomods.

I have to say, I'm loving the phone immensely.  And even more, it's these mods.  It's what really makes you feel you're using a 'future device'.  So fun.

Today, I want to showcase the Insta-Share projector.  When I saw the release my jaw dropped.  I've been looking at pico projectors for some time, and really liked the idea of the Galaxy Beam (but it was hitched to such a poor phone) and this was the best of both of those ideas.  A pico projector that isn't permanently attached.  Use it only as you need.

When you plunk it on the to connector it will pop up with how much battery it has.  The device has an 1100mAh battery which should last about an hour of viewing (I got about 70 minutes in testing) before it starts to drain on your phone's battery. 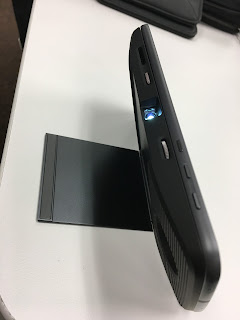 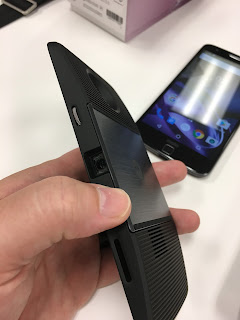 The mod can be charged while on the phone or off (use a QC2 charger or it may drain about as fast as charging, which can be rough on the battery)

To start watching you hold the power button on the mod, and in seconds whatever's on your screen will display on wherever you pointed it.

Hopefully you put it on something in landscape mode, else the display looks a little tiny with the display forcing the portrait mode in the smaller height... you'll see what I mean if you try.

You can lay the phone down to project vertical, or there's an arm that can go almost a full 90 degrees to project on the ceiling (I love doing that).

The display can be up to 70" and you'll have to adjust the focus manually (but it's neat that it'll actually adjust for the keystone on its own... it's cool watching it adjust as you track it across the ceiling adjusting the angle of the arm).

The display although big, is still only at 480p, and you can notice that it's not in HD, but only just.  For the most part watching videos or playing games you're just happy to play away.

Personally, I love plopping it on the bed, turning off the lights and watching Youtube or playing games on the ceiling.

In the home, I don't know how practical it would be.  The battery life makes it a little limiting (not often would we have a charging cable long enough to reach where we'd want to set up the projector in the middle of the room or so).  I see a lot of options however in the workplace.  Want to go to a sales meeting and just bring up your phone (heck, we adjusted and edited the Google Slides on the phone, why not just keep it there?).  Also, think of the 'wow factor' it would provide to your client!  :)

At $300USD (still waiting for a Canadian retail price) it's what really makes it out of reach for most household usage ... it's a little hard to justify that it's 'cool' for the price.  But when pico projectors are about that price already, and it works for the phone simply... that's neat.

The other drawback is the fact that at only 50 lumens it makes it a little harder to see when you use it in even a dimly lit room. 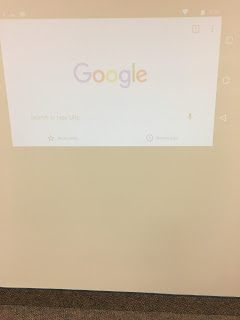 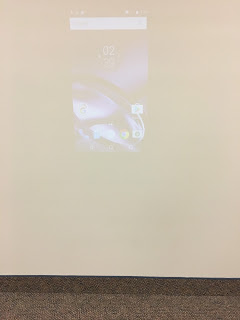 Which is too bad, but then again it's still viewable for the main jist.  But you often wouldn't do a presentation in a well lit room.  But just be conscious of it.

Also, personally, I wish there was a little lens cover slidey thing to protect the lens when not in use.

Another little picky point is that after some time if you have the phone near you, you can start to hear the fan a whirring.  Not loudly, but one of those things you don't think about when you hook up a projector to the laptop and have it a VGA cable distance away.

One neat thing about using it is that not EVERYTHING displayed on your phone shows up on the projection - for example your notifications or pop up notifications.  This is at first something I thought was a pain (dang, I can't see what the email is that popped up while I'm playing my game), but then think about it... you don't want to be doing a presentation to a client and then your buddy texts you "hey, you finished with that time vampire yet?" ... that'd be embarassing.

Overall, this is one cool novelty household accessory and would be hard to justify the cost; but for the office it's an easily justified item if you're used to making presentations.  Just the space savings alone is worth it (I hate lugging my laptop and bag, then the projector bag and finding all the cords and cables).

Just wish for the price they could have included a spare USB-C cable to charge while you use it.  They did include a carrying pouch (probably to protect the lens when not in use as there's no cap or cover). 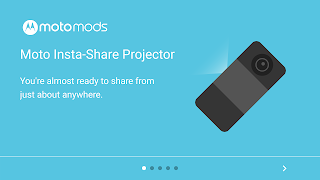 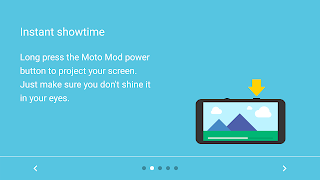 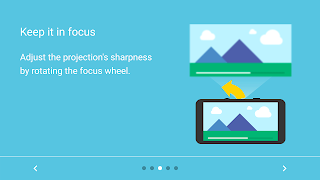