Posted by Ryan Moore on July 19, 2016
So, up until now, the list of friends that the LG G5 has had was pretty small, a battery/shutter button, a VR headset, a 360 camera and then 2 elusive ones, a rolly bot and a digital headphone adapter.

In Korea today they just launched the new Action Cam. 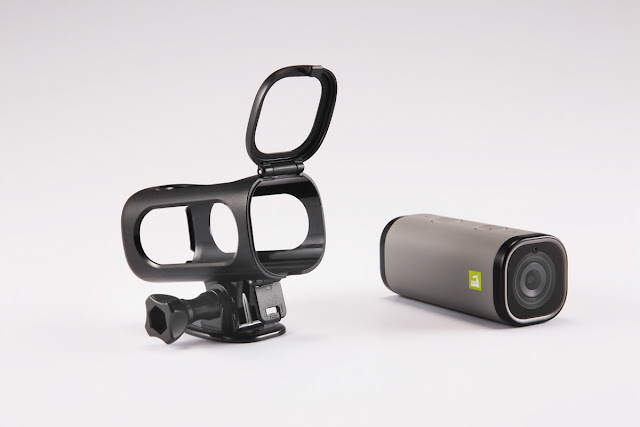 So, the idea is that it's an action camera that you can have connected to the web via LTE and stream live through to Youtube.

As it's only in Korea at the moment, there's no listing of price yet.  If I had the choice, I'd still pick the 360 Cam over this.

Here's their press release and you can see their specs at the bottom, but with out price it's hard to say whether it'd be worth it.

SEOUL, July 19, 2016 ― LG’s latest Friend smartphone companion device rolls out today in South Korea to be followed by other key markets in the weeks to come. LG Action CAMLTE offers robust features that allow for filming in dynamic environments and its built-in LTE connectivity, powered by the Qualcomm Snapdragon™ 650 processor, means users can stream directly to sites such as YouTube Live via wireless 3G or 4G networks.

Rated IP67, LG Action CAMLTE is dust- and sand- proof allowing it to be immersed in up to one meter of water for up to 30 minutes. In addition to the included mount, this rugged camera is compatible with various third party action camera mounts and accessories to capture smooth footage while attached to helmets or moving vehicles.

“LG and Qualcomm Technologies have worked closely together over the years, and we are delighted that LG is extending the Snapdragon relationship, adding the LG Action CAMLTE to the existing 360 CAM and of course the amazing G5 itself,” said Anthony Murray, senior vice president and general manager, IoT, Qualcomm Technologies International, Ltd.

“LG Action CAMLTE offers a new and exciting experience with unparalleled features and innovation,” said Juno Cho, president of LG Electronics and Mobile Communications Company. “We are committed to developing a range of new Friends for LG G5 as well as premium LG smartphones in the pipeline.”

Earlier this year, LG organized developer conferences in Korea and the United States and distributed an SDK to encourage development of LG Friends as well as sponsoring a competition to attract the best Friends ideas.

Price and exact date of availability will be announced locally.

Key Specifications:
* Feature to be available with upcoming software update.