Got an Android Box - you'll want a wireless keyboard [review]

Posted by Ryan Moore on July 28, 2016
So, slowly but surely I'm starting to get used to using Kodi on the Android box I reviewed but my biggest complaint is at being able to properly search.  Using the remote to move around the on-screen keyboard takes a LONG time.  I plugged in a mouse I had kicking around, but that didn't help much as I still have to get up and use it.

Best bet was to find a wireless keyboard with a trackpad, and comes with it's own USB receiver (as the box didn't have Bluetooth built in) - and I found this one online.  And I ordered it, because hey... $10 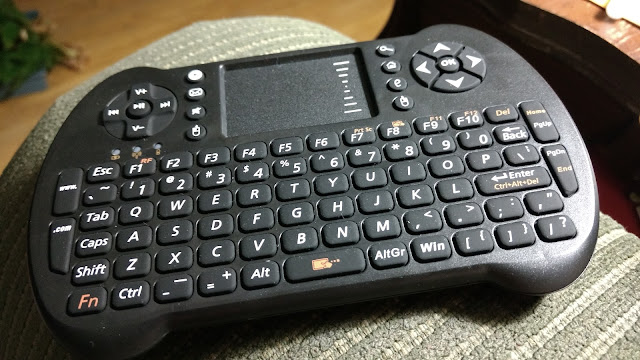 Was it $10 well spent?  Well, it's not the greatest keyboard out there, but it certainly did the job.  The trackpad tracked well enough and the side swipe for scrolling worked too.

The keypad buttons were nice and have good feel so that it wasn't slippery and had good spring.  It feels somewhat like a game controller too how it fits in your hand.  The space button feels a little hollow tho'... like it might be the one that'll break first.  But, at $10... who cares.

Now the only weird thing is the button layout beside the trackpad.  The search button works for the universal search, the home button didn't do anything, the 'e' acted as the home button and sometimes hitting the ... I'm guess it's a right click ... just froze up the keyboard and I couldn't even use the trackpad then.

Nothing crazy, so just use the mouse or the directional pad and type when I need to... don't get caught up in weird buttons.

It got a little weirder as I plugged it into the USB port on the LG G Pad 3 and my Nexus Player.  Same weird button configuration... so don't mess with it.  But then I would find that it would go along just fine and then for some reason stop working.  I'm not sure why, but this happened on teh G Pad a lot, and for some reason the G Pad when I would plug in the receiver to the USB port it would start up the iOS backup feature.

Well, for $10 it's not for everybody, but for using it for just the Android Box to watch Kodi, it's doing just fine.

Now, you power it up with 2xAAA batteries, and when you look at the top you see that there's a covered up port for a microUSB (i.e. for charging) and it makes me wonder if I had held out for a few dollars more to pick one of those up, but so far the battery's lasted a couple weeks easily (it's nice to have the on/off switch, so I know I'm saving even more battery).

Overall... is it a high quality product?  No.  Not close.  Does it do the job?  Yes, absolutely (just don't go monkeying around with buttons you probably don't need).  In the end, it is what it is... a cheap accessory to just perform a simple function, and I'm happy with my purchase.